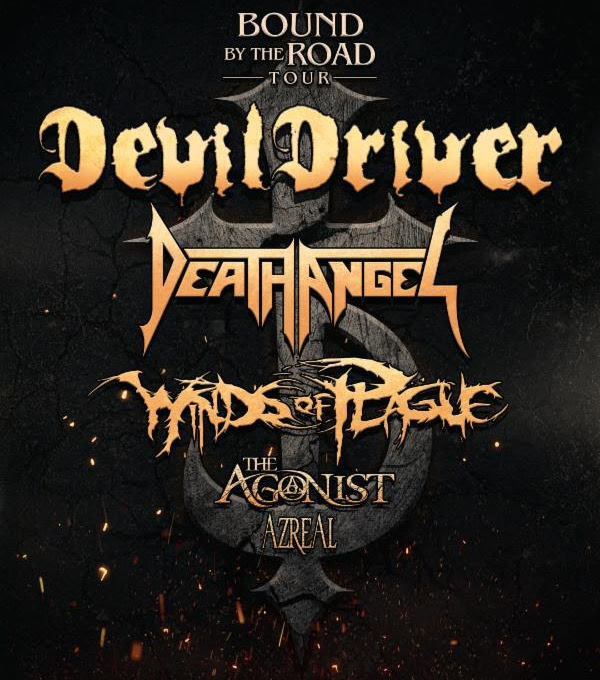 February 21st 2017, Oddbody’s, Dayton OH: It was a warm February evening when we pulled up to Oddbody’s music venue. Trying to soak in every second of the rare weather; we didn’t mind having to park far away for DevilDriver’s sold-out show. It also gave us time to absorb the unique area in which this venue is located. Oddbody’s rests at the end of a sad-looking strip mall that has seen better days. Next store, a closed Family Dollar provided some ambiance with its million florescent lights still turned on. Down on the corner there is a Family Video that’s actually open and operating. It felt like we time warped back to 1998. Yet according to Dayton.com, Oddbody’s is rated the #1 place in Dayton, Ohio to hear live music, so it couldn’t be all that bad. In fact, for being the bookend of a dismal strip mall, the venue is quite pleasant.

We walked in and the place was buzzing with excited metalheads ready to rage. Four local bands played and got people sweating before any of the touring bands even hit the stage. Forces of Nature, 80 Proof, Slaves, and Hellraiser, in 15-minute slots, all steamed up the room showing off their stuff. Love going to a new city and seeing the metal scene alive and well. 7:20 PM hit and as the sweat began to trickle, the first touring band hit the stage. Aussie act Azreal quickly heated things up with their primal, impassioned sound and stage presence. Singer Luke Hosking gave the crowd something to chew on with his impressive vocal range. All members were severe and articulate in their craft. Groove and speed is a lovely pairing. And this band does it well. Their song ‘Surveying the Fearful’ hit home and the crowd welcomed these fellas from Down Under with open arms.

Another non-native band, Canada’s The Agonist, took the stage next. The lights dimmed, the fans were turned on, and the backing tracks started to play, letting the crowd know it was time to cheer. And cheer they did, because The Agonist is a force to be reckoned with. All five members are filled to the gills with grit and energy. They were eager to share their sound to the strip mall venue. A favorite, ‘Necessary Evil’ is one of their songs that shows off their unique melody/brutality combo. This hair sweeping band makes metal look effortless with their massive sound, intricate ease, and playful attitudes on stage. Singer Vicky Psarakis shared a story about how the last time she was at this venue someone called the cops on her. She was doing her vocal exercises in the back ally and someone heard her screaming and called the police. They’re a fun group while still being sultry with smoke and fire blazing in persistence, graceful glamor, and elegance.

By 8:20 PM, Winds of Plague had the stage. Being from sunny LA, these guys are anything but bright and happy. With a ferocious approach they were almost evil in how they conveyed their merciless metal. The heavy dueling guitars were a blunt blow right to the gut and the keyboard work of Alana Potocnik added that extra level of intensity. Her playing and concupiscent presence certainly improved the band’s aesthetics. Yet, all six members were refreshing animated and alive. In their song ‘Refined in the Fire’, singer Johnny Plague, seeped sinister screams and pumped up the sweat glistened crowd to a new level of frenzy. Perfect preparation for the next band.

After we were swept away by Winds of Plague, the night shifted gears. Thrash legends Death Angel cracked open the night with brilliant ferocity and furor. The crowd’s eyes widened as if to try and take in more of the band’s vibrant vitality and savagery. It’s inspiring to witness a band that has been around for over 30 years still love what they do. Having seen them over a dozen times, the intrigue and excitement never lessens. They started in the early ’80s when they were just high-school punks. To this day, they still carry that youthful, raw angst in their sound. The deep, sexy guitar groove of Rob Cavestany grabs you. His and Ted Aguilar’s playing sends you off into another realm filled with elaboration and energy. ‘Claws in So Deep’ is a labyrinthine of a song that pierced the crowd and educated them on what real Bay Area Thrash is. These California boys are just as talented, eager, and relevant now as the day they started.

As we all tried to catch our breath after Death Angel’s set, Dio poured through the speakers which seemed like appropriate music to prepare for the headliners of the evening. At 10:15 PM, DevilDriver hit the stage. And hit it hard. After seeing 8 bands the audience, still burst with enthusiasm. They were instantly exhilarated when frontman Dez Fafara lifted his actual vintage 55SWG microphone and screamed. Dressed in black leather and the smoke machine on high made the band’s presence seem more ominous and powerful. ‘My Night Sky’ sent a lot of crowd surfers over the barricade. During their whole 13-song set, bodies continued to soar to the stage. It’s encouraging to know kids these days still know how to properly mosh. The crowd was the band’s conquest whom they enchanted and infatuated. This Santa Barbara based band started in 2002 and they still carry their early nu-metal roots. You can hear it in their clean melodies and crude breakdowns. DevilDriver commanded the room. As knights rallying to the king, we sang the band’s battle cries together. A captivating connection between band and fans was felt by all.

The night felt over all too soon, which is impressive considering there was a total of 9 bands. The windows of the joint were fogged, the air conditioner was on high, and though fresh air sounded glorious, no one felt ready to leave. A few metalheads lingered with smiles on their faces, dazed by the variety and sheer volume of music they just heard. Rock is not dead. because if Dayton can sell out a metal show on a Tuesday night, there is definitely life left.