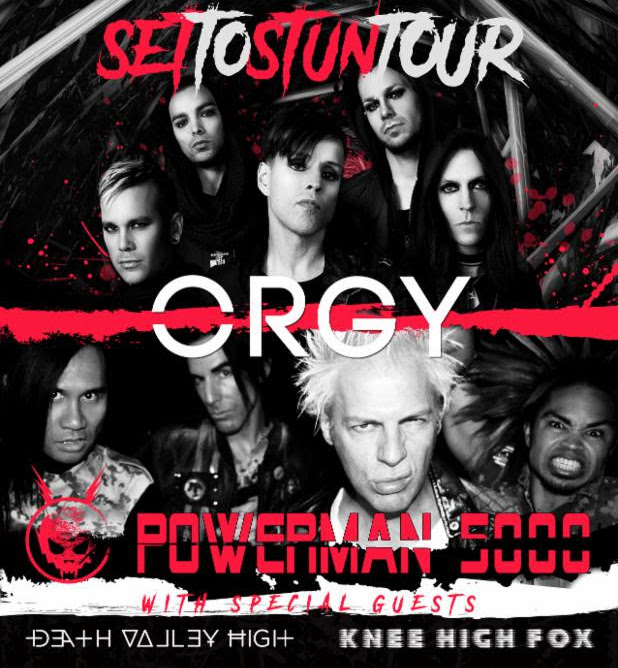 First was local Los Angeles band Dirty Machine who brings us a unique flavor of nu metal that encompasses a multitude of genres including old school rap and hip hop along with hardcore. Even if it’s not your favorite flavor of Kool-Aid you will dig the vibe and respect the craftwork behind it. These guys brought the attitude and had the skills to back it up, and they along with many of the nu metal bands were probably inspired by Orgy in one way or another, as they actually were one of the first of their kind and happened at a time when metal styles were shifting in a new direction. Some of those other bands under the same influences killed the vibe for me by selling the wrong message and cheapening the outcome, but Dirty Machine came out on top and are keeping the right elements alive.

The next event to happen was the best moment of the night and they also won best band of the night in my eyes as well. Delta Doom took the stage as a two-piece from Nashville and I can not hold back my enthusiasm on how refreshing it was to see a gothic vibe doom band this modern and unique and cerebral at an Orgy show of all places. They did fit on this line up nonetheless, and they also stole the show in my book, on creative genius alone. The drummer plays on a low and minimal drum set and sings lead in an echoed tone through an enhanced microphone. This man blew anyone playing a fancy drum kit stacked to the max with accessories out of the water hands down. The lyrics are almost bluesy in style but the slowed pace and dark tone brings another quality into play. Then the towering guitarist, with his gothic light projecting black gas mask styled face mask, plays some unique doomy dark riffs and grooves that are perfected by backing enhancements that almost seem to be coming to life, all from the guitar because they are so tightly fit in place with all else going on. The drumming was super out-of-the-box creative with just enough offset that it shook up the normal. I commend anyone that can drum and sing full vocals as it is, due to the fact that it is obviously not an easy task to pull off with flying darkness so well.

The drummer with his musical structuring comparable to masterminds like Devin Townsend, to the guitarist who has the brilliance of all of Type O’ Negative combined, there was nothing not to enjoy. Then as it was announced they were about to play their last song , they played the best rendition of the most oddly fitting cover I’ve ever heard from any band ever. To clarify, they played a Delta Doom style version of Phil Collins’ ‘In the Air Tonight’ and they tore up the tempo and darkened out the sap and made that bitch their own and it was utter brilliance. To make a cover 100 per cent your own and still have it recognizable is one tough feat, but then to top it off with such a genre twist is quite another. The green light show gave a good vibe for the band’s preferred flavor, and the grooves flowed through the misty green seemingly effortlessly. In a band of this dueling nature, less is more and the question of whether or not to have a keyboardist or bass player becomes null and void. The minimalist approach to a very detailed and complex structured music style is highly commendable, and to pull off a dark vibe with a composition of completely opposite elements is a genius dichotomy. When people realized it was a Phil Collins cover, giggles were heard amongst the crowd, but these were not giggles that were laughing at the song but rather at the insanity of the idea itself mixed with the grueling audacity to pull it off in such an unusual way. The bottom line here is that it all worked beautifully, and it is once again extremely refreshing to know that new and improved highly original music is still being successfully developed in this world.

Then all that build up of hope and prosper in the music industry in 2017 was attempted to be destroyed as the next band, San Francisco’s Death Valley High, ransacked the stage with their emo and hardcore nu metal vibe. The vocals were on pitch and the general message was there as it should be, but after giving it a fair chance the lack of proper guitar tone mixed with the direct pulling from other songs that Marilyn Manson and friends already wrote in a more successful way really shattered any good moments for me. If you aren’t playing a cover it’s a good idea to write in your own style and not try to sound like other bands because that defeats the whole purpose of being an original band.

Touring co-headliner Powerman 5000 and support act Knee High Fox were not part of this show, so moving on to the headliner, industrial nu metal band Orgy took the stage and were off and running into to a rocky start that wildly improved by the end. Vocalist Jay Gordon had some off-key moments in the beginning but his energetic party vibe and determination along with a sound realignment helped insure that significant voice back in check. They played the hits from ‘Candyass’ and mixed in a song or two from the new EP. The new songs are just as aggressive if not more so than the old, and that is a positive note. Born into the nu metal and industrial scene in the late ’90s competing alongside Korn and Ministry, these guys were hot at a turning point in metal and you could go as far as to say they helped to form some of the more shallow based nu metal bands I won’t mention. But the industrial party metal gothic vibe they have always carried along with the fact that they understand how to make a cover song their own, as New Order’s ‘Blue Monday’ was their best known accomplishment, was enough to get me to go to their live show, and seeing Jay Gordon walk into the middle of the pit to sing, it was respectable.

This was overall a far better show than I had anticipated, and I have a new favorite band Delta Doom to put on my radar for future LA expeditions. The variety in what I saw in this full line up was well-played, and goth in metal still exists, so all is still right with the world in my opinion.