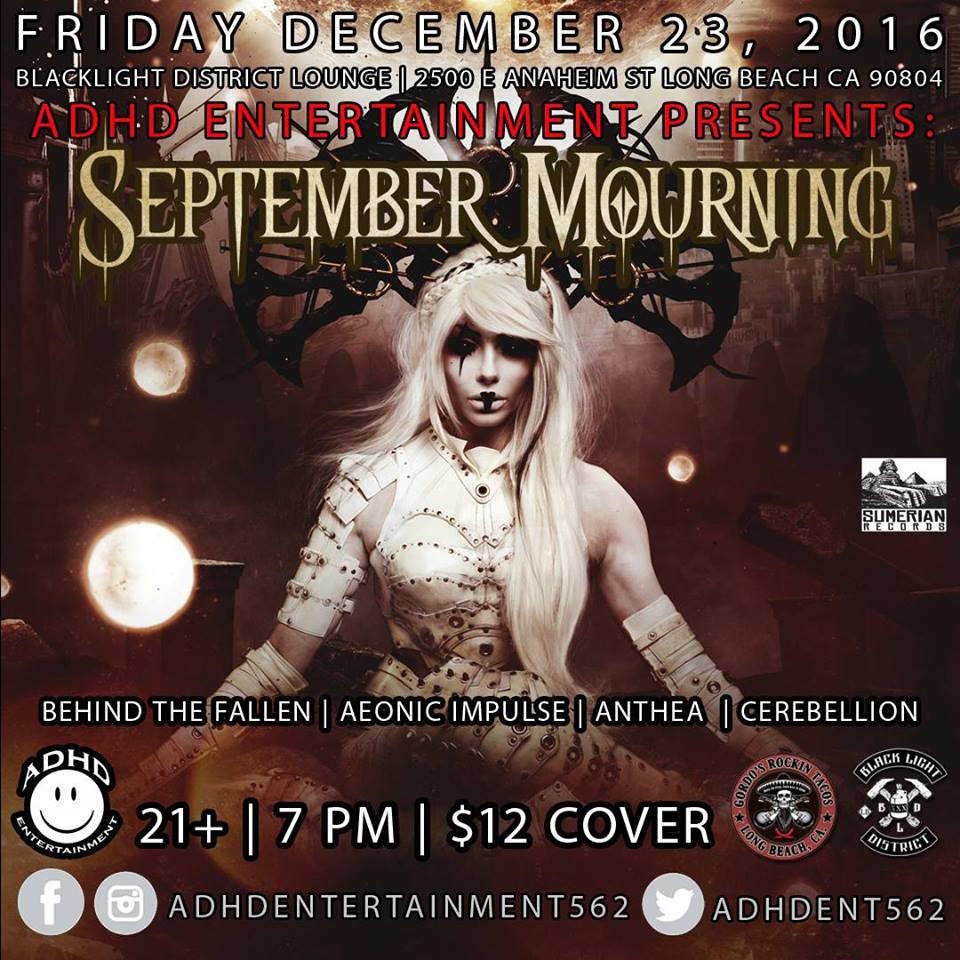 December 23rd 2016, Blacklight District Lounge, Long Beach CA: When you’re at your favorite band’s gig, whether it’s in a club setting or even in an arena, we sometimes forget where they started from. For the few large bands out there, headlining gigs and the big tours get to happen right away. However, for most of the other bands who started out, they were brought up the usual way: as a local band. Inviting friends to support your music, countless copies of posters, creativity and indulgence in making the right merchandise to sell, it’s really a beautiful aspect to witness, and on Friday December 23rd 2016, a special local show would take place at the Blacklight District Lounge in Long Beach, California. Headlining this show would be September Mourning, a hard rock band with a dark storytelling theme, based on vocalist Emily Lazar in the title role. Gaining popularity since their inception in 2009, September Mourning has opened for Marliyn Manson, Mushroomhead, Avatar, Otep and Huntress. Bringing four local bands as support tonight, it would be a step outside my comfort zone musically, something I’ve been doing greatly the past few years, and was looked forward to it immensely.

Arriving at the venue around 7:30, I noticed while sprinting to the entrance how pouring the rain was at the time, yet how packed the Blacklight District Lounge was, 30 minutes before the first act went onstage. Even considering the rain and two days away from Christmas, the bar was full of life and the numbers clearly showed. Props to ADHD Entertainment booking a show that everybody clearly wanted to be a part of. Knowing each band brought their own audience along, it was something refreshing.

First band of the night was Cerebellion, a four-piece heavy metal/rock group based in Long Beach itself, starting off the night with your more standard modern metal sound, with the crowd enjoying the tunes. Nothing stood out to me much until their second track, which slowed down and brought out a real grungy, grim face to the music, and it was the best of their 25-minute set. Vocalist Joe Arnold’s loud and commanding vocals were the highlight for me, and he showed a solid range of clean vocals and rapid movements on stage. Sometimes a band’s particular use of dynamics and slower speed actually work in their benefit, and I enjoyed Cerebellion’s set because of it. Anyone who enjoys ’90s era heavy rock, will enjoy this band’s live show.

Up next, a little more my alley, Anthea would be the second band of this winter rain fest, and right away I noticed singer Diego Valadez holding a “Keytar”, and belting out a loud scream to get the crowd going. Theirs is a well-balanced sound of symphonic metal, I wasn’t sure how the crowd would react as more of them were into alternative and more modern metal, so to speak. But the fast pace of Anthea coupled with guitarists Juan Pina and Constantin Lorenz providing tasteful harmonies and backing up the keytar seamlessly, had the fans crowd closer to the stage and Snapchat the technical prowess. They’re into the show, so that social media counts for something, right? Guitarist Juan Pina’s screams and Valadez’ clean vocals kept the dynamics interesting and brought out the extra push for something unique in comparison to what you would normally find in the majority of symphonic metal acts. Well done for keeping the audience’s attention and providing a fun, yet short set. Anthea did not disappoint, and I look forward to their next show on a lineup even more suited to them.

I’ve been hearing their name for a while and I was definitely looking forward to seeing Aeonic Impulse, and while guitarist Jordan Salfity was unable to play because of work obligations, George Uyama was able to fill in for him on lead guitar. Their sound boomed right away, catching me by surprise, and certainly different from the rest of the bands on this pouring evening. A crisp and punchy progressive metal treat, the riffs had immense power and clarity together, reminding me of Cynic’s ’93 masterpiece ‘Focus’, with a guitar tone dirty to the core yet with glistening sounds streaming in the airwaves. Gasper Gray backed up the rollercoaster interludes and vicious chord progressions with honest, clearcut and harmonizing vocals. And while the instrumentation had the audience who were right in front of the stage paying attention, it seemed the rest of the fans in the venue weren’t exactly into it. Applause and cheers were given after each song, but I could sense a certain lack of interest, as I’m sure a great number in attendance were more casual/mainstream metal fans. For myself, and the fans who were into Aeonic Impulse’s set, we were fortunate and lucky to see a quality progressive metal band play and capture the imagination in a manner I wasn’t expecting. Definitely one of the best bands tonight.

As mentioning beforehand about various genres able to bring in audiences, tonight really showed me what particular metal bands need to work on: a bright, open-mindedness of stepping out of your comfort zone. One of my best friends took me to several non-metal shows through the past few years, seeing bands like Less Than Jake, The Vandals, The Simpkin Project and more, seeing how many show up to these gigs on a positive vibe, supporting all the bands playing, without worrying if a black metal fan wants to see a death metal show. Metal is my life and passion and always will be, but sometimes the ignorance of sticking to one genre of metal is just wasteful. We credit metal and spread the word on how many branches and sub-genres are within, giving the righteous credit that is deserved, yet won’t attend a show in fear of the “elitist card” being revoked. It’s nonsense, and showed me that we have a ways to go for the underground metal scene to pick up on what other music types have nailed down to a science.

Second to last tonight, Orange County local fan favorites Behind the Fallen took the stage, much to the delight of the fans upclose, including a particular fan who was groping vocalist Jimmy Presley. She insisted on it, and he politely told her to not do it. Crossing the line the fan did, no doubt. But onto the music, I’ve seen Behind the Fallen a number of times, and although not a metal band, they do have various elements of melodic metal, and the musicianship is quite solid nonetheless. But what stood out for me was the band’s continued humbleness, and lightning energy on stage. The movement is constant, Presley getting the audience involved singing the words, laughing alongside them, crispy, crunchy guitar tone to get the mosh pits cooking, it’s just hard to stand still when they’re playing. Their newest EP ‘As the Sky Falls Through’ represented here, the song ‘Chasing Glory’ starts off with a rather dark and grim tapping lead intro, courtesy of David Bruno, something I feel really works with their sound, bringing in some dissonance to the mix. Fan favorite ‘You’re Just a Friend’ was the highlight for the fans in attendance, as the music video for it is rather humorous and a catchy tune as well. Overall, their music is more out of my comfort zone of what I normally listen to, but their vibrant, and superb live energy and a tasteful, eclectic mix of alternative rock and melodic metal make Behind the Fallen a very fun experience to witness live. Along with Aeonic Impulse, Behind The Fallen were my favorite band of the evening.

Behind The Fallen set list:
1. Satellite
2. One Last Chance
3. Chasing Glory
4. Reflections
5. You’re Just a Friend
6. Above the Rising

Last and not the least, with the rain continuing to pour heavier by the minute, the atmosphere was set and ready for September Mourning. Although the crowd thinned out ever so slightly, most likely due to the weather, those still in attendance gathered close to the stage as the first song ‘Eye of the Storm’ was played. The musicians in the group, dubbed as “reapers”, came out in dark metal gear and cloaks, setting the tone with some catchy hard rock with some electronic and percussion involved. Of course, the main focus and attention of the band, vocalist and creator of the twisted themes and story arcs within the lyrics, September Mourning herself, decorated in a provocative dress suit, wearing elaborate makeup, and a sinister look in her eyes telling the tales of the living and the dead. What was impressive for me was the effort of the Reapers playing various percussion and synths, creating the luster of pandemonium, and witnessing the crowd nod their heads and dance along to the gloomy rhythms. ‘Angels to Dust’, fresh off their most recent release ‘Volume II’, hit the audience like a ton of bricks with a powerful and viciously loud guitar intro, along with September Mourning passionately dancing through the synths played in the chorus. The percussion, catchy choruses, September Mourning’s impressive vocal work, and moments of electronic music, brought forth a rather unique music package. I enjoyed their set more than I was expecting to, and with all of their most recent support tours, and even an acoustic set at an FYE not too long ago, I can only imagine their stock continuing to rise throughout Southern California and also nationally.

Nuturing local bands with proper supporting slots, getting the fans constantly involved, and of course, bringing along a vastly unique sound with you, has been the most successful formula for how the large bands we know and love, came to be. Tonight’s show was a wonderful precedent to the holidays, and it was extremely enjoyable to see such a large and blissful crowd, despite the lovable but heavy rainy weather. Fans of alternative and hard rock/metal will enjoy September Mourning as well as the rest of the local card presented tonight.