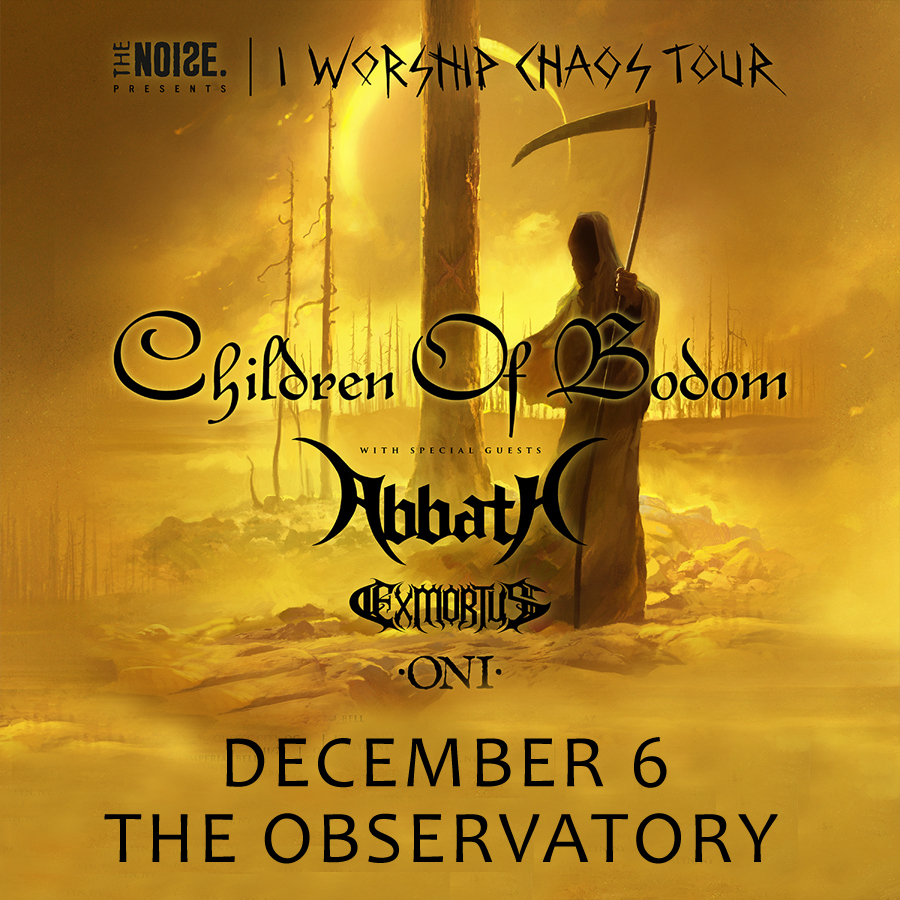 December 6th 2016, The Observatory, Santa Ana CA: In 1997, somewhere in Espoo, Uusimaa, a region located in Finland, something magical would take place for the metal community. 17-year old guitar prodigy Alexi Laiho would form Children of Bodom, actually starting as a band named Inearthed four years earlier, but made the change to get out of a rip-off record label deal, thus setting the wheels into motion for a profound and legendary melodic death/power metal run. Known for stellar guitar work, often tongue in cheek lyrics, keyboard virtuosity, and unique catchy melodies for the time, Children of Bodom’s first three albums would be deemed magnum opuses and profoundly revered and admired by countless fans. Skip some years, and while their sound has changed no doubt, the very core of who the band is has stayed intact, and would be on full display at The Observatory (cough The Galaxy, of course cough), in Santa Ana, bringing forth a fantasic and diverse lineup in ex Immortal frontman Abbath, rising stars Exmortus, as well as Oni, hailing all the way from Ontario, Canada. The festivies couldn’t arrive soon enough.

Knowing the audiences Children of Bodom brings in, I was expecting the place to be packed, and sure enough, as Oni opened the show right at 8 PM, the two levels were already full, with the rest of the building slowly creeping in. Lots of signs all around the venue saying tonight’s event would have a no camera phone or video policy, something I’m perfectly fine with, and shall explain later on about.

With that said, Oni took the stage, bringing forth their progressive death/djent sound from frosty miles Ontario. Never hearing of them before, I was thrilled to see them on such a larger-than-normal metal touring package, as after hearing their first song, I figured the audiences would find them more familiar and easier to listen to. Vocalist Jake Oni wasted no time in taking advantage of capturing the audience’s attention, his screaming and growling glistening throughout their 30-minute set. Interestingly enough, I heard synths in the music, but it wasn’t a keyboard per se, but a xylosynth. Sure enough, Johnny DeAngelis was playing them effortless, which was entertaining to see and impressive to play at that pace. Only having one album so far, released this year called ‘Ironshore’, this band’s music can be described as a fast-paced djent attack with fairly clear guitar tones. Fittingly, ‘The Only Cure’ was the best song of their set, a song for which Randy Blythe from Lamb of God sang guest vocals on the studio recording. The crowd was nodding along to the breakdowns and heavy moments, which were done tastefully. Nothing stood out spectacularly for me with Oni, but definitely a solid live band, and here’s hoping for many more shows for their future.

The venue would fill up rapidly and surely, as “Exmortus” chants reigned ever so high, to the delight of the fans. They’ve played well over 150 shows and counting this year, and from witnessing their performance tonight, it was clear the larger tours and experience has paid grand dividends, because this was absolutely, by far and large, the greatest show I’ve seen them play. Frenetic energy could be felt and seen, the sound was outstanding, and you could just hear the band playing so aggressively but full of joy and fun while doing so. It was almost as if they were playing their very first show, being 100 per cent into every note and detail, and then some. Whoever doesn’t know by now, Exmortus plays technical death/thrash metal with a focus on superb and devastating guitar ability, in which frontman “Conan” Gonzalez and fellow axe partner David Rivera, wasted no time in wowing the audience with cosmic speeds and burning fret ability, as well as intricate notes and harmonies woven together. The guitar pla was beautiful to watch but by no means a show-off, and all notes and patterns came across as essential to the songs. ‘Moonlight Sonata (Act 3)’ goes over extremely well played live, originally from the great Beethoven himself. The roaring classical speed and wonderous melody works so eloquently, and I also believe instrumentals fully played, and not just as PA intros for shows, are a rare treat. But the biggest shock and highlight of their stellar set, was their rendition of ‘Foreplay’ from Boston, another compelling classic rock instrumental that guitar legend Tom Scholz gave birth to, enticing the audience to air drum/guitar profusely. This was probably the sixth time I’ve seen Exmortus, and raising the level of their band to this much, especially in front of a near sold out audience, cannot be denied. Absolutely one of the best bands of the night.

As previously mentioned, there was a strict no camera/video phone policy, which at first was being followed accordingly, but as the show continued through dusk, I noticed several in attendance still trying to record or take pictures, and I saw at least three people escorted out of the venue. Do not get upset, criticize, or blame anyone else if you violate the rules the venue clearly pointed out and posted in several, several places. If you don’t like the rules, sell your ticket or don’t go. I think it’s quite refreshing to just enjoy the show, save some battery life, as well as, dare I say… socialize with other metalheads?! You’re not ‘cooler’ than anyone being of a small handful of folks recording this show on your mildly decent to poor smartphone. In fact, if you know that rule and still attempt to, you’re probably an individual who believes yellow mustard is the esquisite condiment choice in your food, and that Bruno Mars is a talented songwriter (metal folks who don’t know who he is, thank your lucky stars, he’s quite awful). Please do not be one of those people. Enjoy the show, or at least pretend you can watch the stage without having to click bright buttons against your best judgement and vision. End rant.

Abbath and his band were met with deafening cheers and various “Abbath!” and even “Immortal!” chants. It was truly a pleasure to see him play again, with the last time I ever saw Immortal was in 2010 at The Avalon, sold out and a magical evening witnessed. Noticing upon observation, the crowd really enjoyed his solo songs, with ‘To War!’ getting the audience fired up and moshing all along the way. His bandmates were extremely tight in their proficiency, and playing everything the exact way as it was on record. It was also proper watching a second guitarist alongside Abbath, Silmaeth, while staying in the background, giving Abbath the front and center stage. Most know of his silliness on and off stage, running on each of the sides in a crab walk, or pausing on various moments for cheers, and while I know some have an issue with it, and I certainly see their perspective, I don’t mind it at all, because I feel personally he earned it. Starting Immortal with Demonaz back in 1991, he paved the way of epic and classic black metal, and when the music was playing, he was professional to the core, and honestly still sounding just as grim as he always has. And speaking of Immortal, the audience and yours truly would be gifted with four Immortal covers, which of course were the highlights of Abbath’s 45-minute set. Three of them were off of ‘Sons of Northern Darkness’, Immortal’s astounding 2002 release, also one of the first black metal albums I’ve ever layed my ears upon. The crowd resonated and glowed in delight, especially with ‘One by One’. But the closing song ‘In My Kingdom Cold’ with its dark-sounding picked appregio was the best moment of the entire show for me. It completely stopped me in my tracks and had the the pit open up brutally and quicker than The Flash’s marathon run. Goosebumps rendered throughout my body through the entire song, and closing with said intro riff could not be more divine. The crowd was moved, wowed, and genuinely amazed by Abbath’s set, and alongside Exmortus, proved to be the highlight of the evening.

After hearing a solid opening act, as well as two outstanding performances shortly after, tonight’s headliners and said legends Children of Bodom, definitely had their work cut out for them. And despite the solid reactions each and every band had received thus far, they would be drowned out in comparsion of “Bodom!” loudly and violently. The song ‘Needled 24/7’ started things off with a bang, with the fans screaming louder than Alexi Laiho could muster. Every guitar melody and note Laiho would play was sung happily by the crowd, truly showing their level of appreciation at a vastly high level. While myself and several others appreciate the latter material of COB, their first three records ‘Something Wild’, ‘Hatebreeder’, and ‘Follow the Reaper’ are simply their prime and greatest work, and shockingly, 8 of their 16 songs played tonight, yes half, were from those said albums, and for this being my fourth Bodom show, this easily was the best one, mainly for that reason. The older material just works excellently, even live too, with ‘Follow the Reaper’ and ‘Bodom After Midnight’ just dazzling to witness, something so rare and an impeccably tasty treat for fans in attendance. This is definitely Laiho’s band, no doubt, with the aura surrounding his every lyric spew, guitar lick and amazing innovative ability he shows on stage. Nevertheless, keyboard extraordinare Janne Warman matched every note that Laiho played, including several solos of his own that almost sounded like a guitar, and just as fast too. Bassist Henkka T. Blacksmith eagerly shouted out the backup vocals to ‘Silent Night, Bodom Night’ from my favorite record of the band, ‘Hatebreeder’, seemingly enjoying the fans’ reaction to them playing the early years material. ‘Morrigan’ from their latest release ‘I Worship Chaos’ got the crowd going too, as well as ‘My Bodom (I Am the Only One)’. Only this band can have various amounts of the word Bodom in said songs. To their credit, older material and even new material from the band still translates very well live, and their 70-minute set was just enough and perfect, and didn’t feel too long or short. ‘Lake Bodom’ got the largest reaction from the crowd nearing the end of their set, an indication to the band of how grateful and appreciative the fans are for having the chance to go back in time 20 years to hear from the first record. A highly enjoyable set from Children of Bodom, and with sets like these, their attendance, growth, and positive memories will continue to rise.

This was a monumentally remarkable gig, and the diverse and quality lineup no doubt left every metal fan in attendance happy and well worth their ticket price. I heard fans complain about the near $40 ticket for this show, but COB deserves it, as well as it gives a chance for the rest of the bands to make more money, and we love our metal so much, isn’t it time to support them properly and be happy when they can be well off and do what they love? No complaints from me. Attend this tour, and worship chaos, metal and joyful, everlasting times.