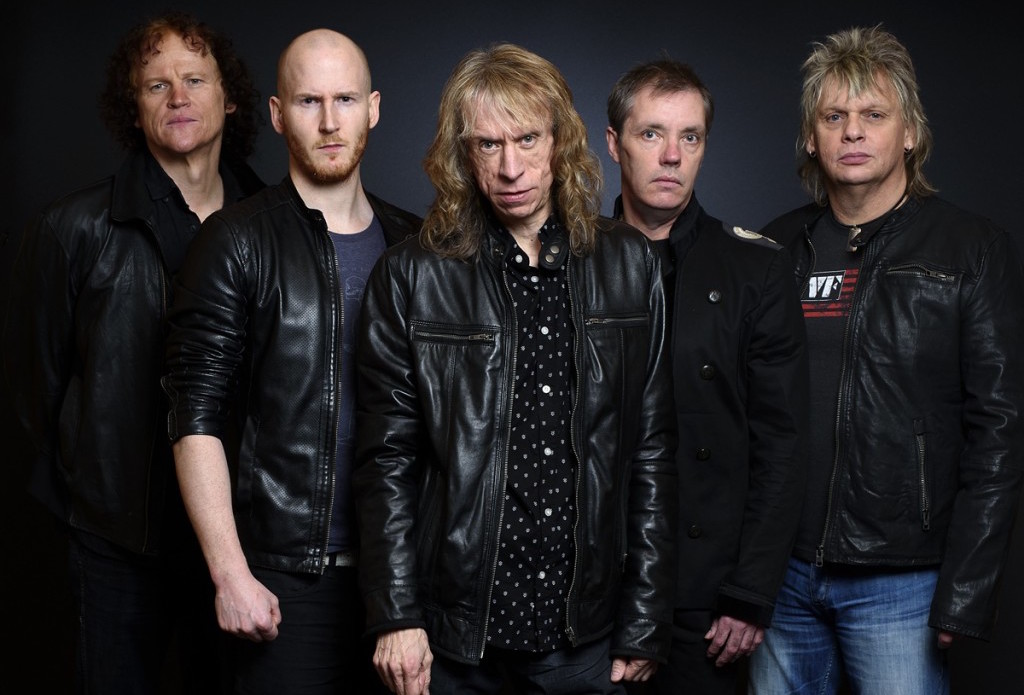 December 2nd 2016, Los Angeles CA: Last Friday, one of the most influential bands of the New Wave Of British Heavy Metal genre Diamond Head graced Los Angeles to end a tour on which they already performed in our city less than a month ago, on November 3rd. As odd as this reoccurrence may have been, it was a worthy one as they still packed the house and gave more people a chance to see the legend that was and still is Diamond Head. Many of the fans definitely attended both shows and I highly doubt there were any disappointments involved.

There are quite a few interesting features and stories behind this band, and therefore, even though there were the usual pay-to-play openers, some of which were worthy of the stage while some destroyed history by playing covers of songs from great metal bands in a not-so-good way, I’m not going to dive into any of the openers any further.

Back in 1976, guitarist Brian Tatler created what was one of the most influential bands Metallica has ever known and somehow all the credit goes to Metallica while Diamond Head remains the man behind the curtain. Tatler remains the only original member in the current lineup, and this time around they were down to four members with no rhythm guitarist while they also feature their third singer since their late seventies origin, Rasmus Bom Andersen, who is absolutely phenomenal despite only being in the band for less than three years. His voice is clean, crisp, clear, and the presence and vibe fills the room in a very positive way. The music itself, however, from old classics such as ‘Shoot Out The Lights’, to ‘Lightning To The Nations’ to ‘Am I Evil’ to ‘Starcrossed (Lovers Of The Night) to ‘Shout At The Devil’ from their latest self-titled album is so well written that is impossible to ignore with even half as talented players. That said, the lead guitarist is exceptional and vital with all the years of practice he has under his belt, there is no turning back on the out-of-this-world intense solos he fires out at the audience in all the right spots. The drummer plays perfectly in that classic heavy metal style and then jumps over to the NWOBHM style that fans know and love. He also apparently had to miss his own mother’s funeral due to the tour and at the bitter end of the encore he gave a heartfelt speech on the matter that exuded much respect. With such radiating talent beaming crazy good tunes out to the crowd, the bass player who happens to be the brand new member stood out slightly and unfortunately as the weakest link. This is not to say he wasn’t a good fit as he had the charisma and skill to hold his own, but with bands that have been around for so long it never goes unnoticed when someone onstage is fresh off the boat. 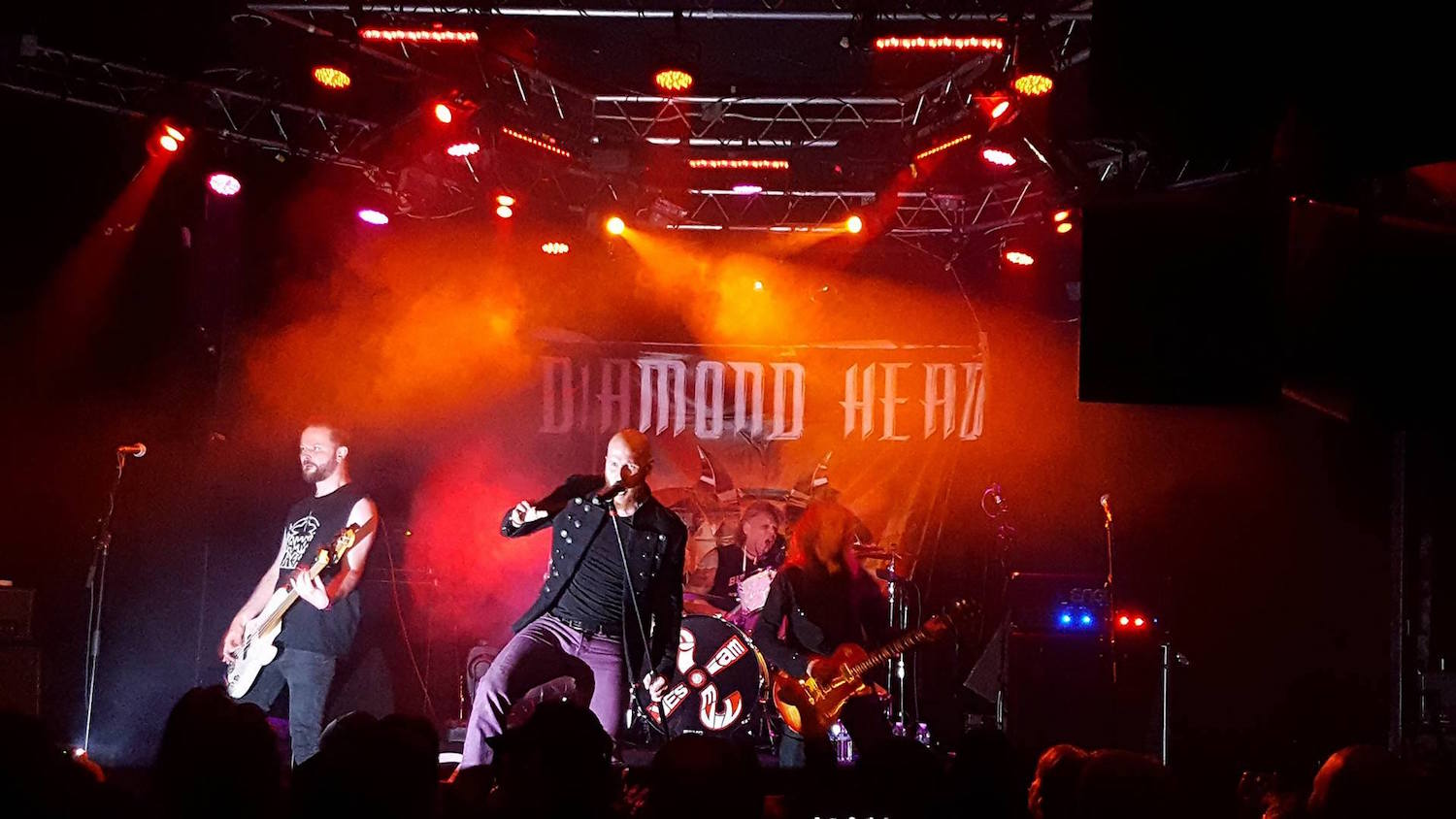 They did start off the set with Star Wars themed backing tracks, but even without a live keyboardist they managed to remain serious and focused the entire set. Most NWOBHM bands have a small or large “cheese” factor about them that takes away from the craft of the music at times. Even Metallica has that “cheese” factor at times that really denounces their capabilities. When they play ‘Am I Evil’ it reads as sinister and humorous, yet when this incarnation of Diamond Head performs the original version, it is “all please and no cheese” and that is what separates them from other NWOBHM bands such as Grim Reaper who are up to their ears in different flavors of cheese. Both styles are a great time to watch but Diamond Head is straight forward and gimmick-free and never stagnant or simple. They are full of range and complexities that most bands simply don’t have the energy for, and although they only managed to get seven studio albums out in forty years, every one of those albums is worthy of a gold star. “The fuel to the fire, and that which I desire” describes Diamond Head as a band perfectly, and yes I know I indirectly mis-quoted Metallica for a reason because “sad but true” you can’t talk about Diamond Head without mentioning them, unfortunately or fortunately, depending on how you look at it.

For myself, I really enjoy Diamond Head and the fact that they set a trend for others to follow with their mix of that classic Judas Priest style followed by their own unique and inspiring flavor of NWOBHM. As to not give a history lesson, let’s just not care who sang before Rasmus or where he came from and just be thankful that Brian has someone that can match him in style and that they are still blowing minds live as a band. This show had all the makings of a properly done heavy metal show with the serious nature of the mosh pit to that one guy that got kicked out for starting a fight. If you have never heard them live I highly recommend sailing that ship before the lighting strikes the sail, and if you want to know part of the reason that Metallica and Megadeth soared off into popular thrash land, consider their main rooted influences which primarily started with Diamond Head. Am I evil, because I’m fairly certain in 2016 I’d rather listen to a Diamond Head song than a Metallica song old or new? Most likely the answer will be, yes I am.