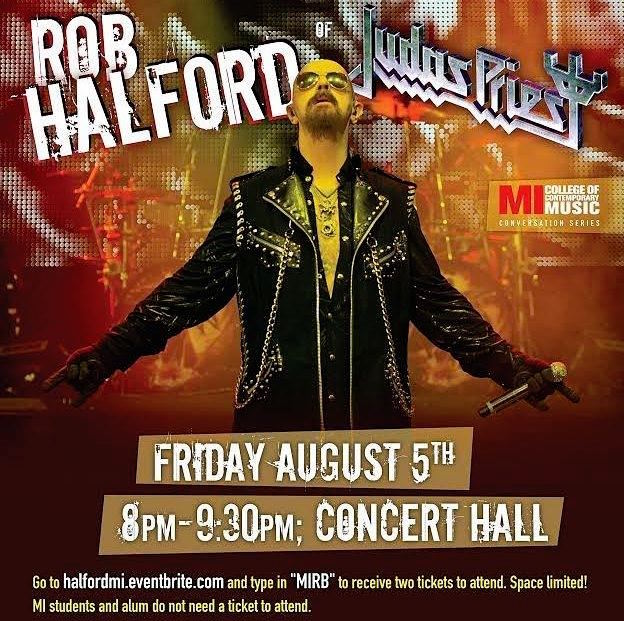 August 5th 2016, Musicians Institute, Hollywood CA: It is not often that you pack a 500-capacity concert hall on a busy Friday night in Los Angeles, for an event where all you promise to do on stage is sit and talk, unless you happen to be the Metal God. Last Friday August 5th 2016, Judas Priest singer Rob Halford made a visit to Musicians Institute in Hollywood to take part in the music school’s ‘Conversation Series’, wherein musicians sit down with Alternative Press senior editor Ryan J. Downey (who has also worked withMTV News, Billboard, The Hollywood Reporter, among others) for an in-depth one-on-one talk. The event was obviously freely accessible to MI students, but was also opened to the general public with a limited number of free tickets distributed online via Eventbrite. Most residents of Los Angeles have a love/hate relationship with the city, but one of the perks of living here is getting to attend such unique events. Fans gleefully grasped the opportunity to be in the Metal God’s presence up close and personal, but perhaps little did anyone know that the session would be just an entertaining as seeing the man front Judas Priest in concert.

Ticket holders started lining up as early as 5 PM, and the line lengthened with every passing minute as more and more people got out of work and other commitments and arrived at MI to ensure their entry for this general admission, first-come-first-serve event. Doors opened promptly at 7:30, and attendees found seats in a swift and disciplined manner. Paper ticket printouts and mobile tickets were not scanned at the door, as staff only made sure that people were visibly holding their tickets in their hands, which also resulted in quicker entry for everyone. As advertised, the house lights dimmed a few minutes past 8 o’ clock and all was in readiness for the session.

Ryan J. Downey appeared on stage first for the obligatory two-word ‘Metal God’ introduction of Rob Halford onto the stage, and dressed ‘concert casual’, Halford took his seat amidst raucous applause, and thus began a two-hour conversational session, as Downey talked to Halford in detail for the first 90 minutes, and then the floor was opened for audience questions. Not that any of the questions in the interview were brand new or out of the ordinary, but Halford’s answers were greatly detailed, perhaps like never before, and gave this audience wonderful insight into his childhood in Birmingham, the formative days of Judas Priest, some of the inner workings behind classic Priest records, and even tackled subjects like the PMRC and Babymetal with ease. He had the fans here in splits with the stories he shared on all of these topics, and the session as a whole was nothing short of a laughriot for most in attendance. The loudest cheers came with any and every mention of the next Judas Priest album, which Halford said he and his bandmates are currently working on.

More than anything, Halford showed that he keeps up with the times, and fans were pleasantly caught by surprise when he admitted that he’s addicted to Instagram, rattled off names such as August Burns Red and Whitechapel as bands he listens to, opined that ‘Stranger Things’ is the best thing on TV right now, and said that he is well aware of all the Blabbermouth hate for things such as his collaboration with Babymetal. He gracefully answered all of the audience’s questions in great depth as well, and the session was brought to an end only because of the powers-that-be reminding Downey that the clock had almost struck 10 whereas they were supposed to wrap up before 9:30.

This two-hour session was undoubtedly as engaging and compelling as a Judas Priest concert (if not more), and by Downey’s own admission, better than any of the other Conversation Series episodes he had done on this stage. The entire event was filmed professionally by the school, and will be posted online soon. Although it would be hard for MI to top this, the fact that they scored a tete-a-tete with Halford augers well for the future of this series, and there is potential for more such music legends to grace this stage. MI students as well as the general LA metal-loving public is strongly recommended to keep tabs on the Conversation Series and attempt to attend some of these events in the future.

If you like what you’ve read, support Metal Assault and buy a shirt!