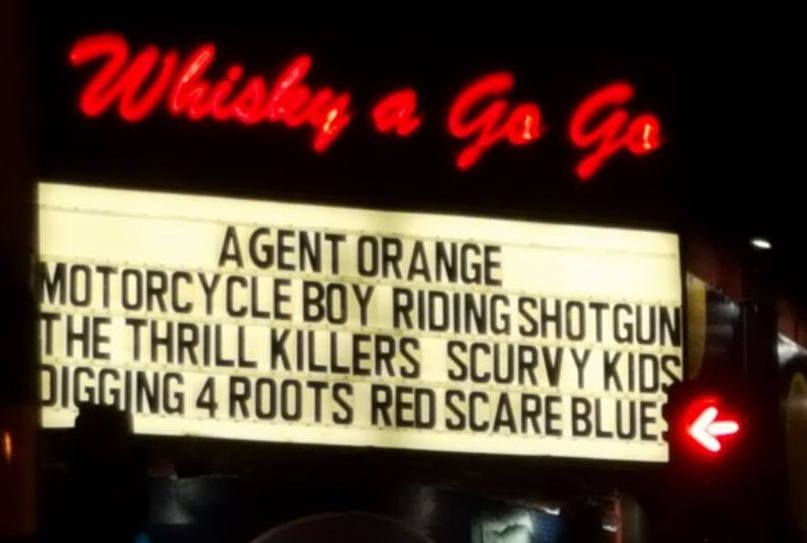 June 17th 2016, The Whisky-A-Go-Go, West Hollywood CA: Punk rock has been kicking ass from the sidelines for quite a few decades now, and although some people may be in the mindset that punk died somewhere along the journey, I can reassure you it hasn’t. In fact, there are many modern-era and old-school punk bands that mix up the style of the genre in such a way that it becomes timeless. On Friday, June 17th, 2016 I attended my first Agent Orange show at the Whisky-A-Go-Go and I left the night with no regrets. The support acts on this night were Motorcycle Boy, The Thrill Killers, and I caught local band The Scurvy Kids as well.

For a Friday night, I would say the venue was slightly under-packed, which was a little surprising due to the history and legend that Agent Orange have brought since their 1979 origin. Regardless, those in attendance were true fans and true fans only of someone on the evening’s lineup, which made the whole show run more smoothly in the end. To start the punk explosion was Scurvy Kids who are a very young group of players with the unusual aspect of an even girl-to-guy ratio. The other interesting feature with this team is that the singer guy and bass player girl alternated positions, and while it seemed the male was the dominant vocalist, the female really stepped up her game with a ’90s girl punk vocal vibe in a similar styling to Kathleen Hanna from Bikini Kill when it was her turn to sing. Meanwhile, the guy who took over her bass duties was bringing his A-game which I hadn’t felt as much when he was on vocals, as it was not super confident. It was during this first switch-up moment that I actually noticed this band being better than the normal young pay-to-play groups that usually end up with an early set time at the Whisky. It was refreshing to see such a young group try to master the older punk styles and they seemed to have a great understanding of what it all entailed. The guitarist may have been racking up points with the power chord approach, yet appropriately so and skillfully as well. The female drummer may have been a bit light in her loafers in the strength department, but she was hitting the style and the tempo just right. They played a couple of covers, one of which was Ace of Spades by Motörhead, and unfortunately it was a fairly average rendition, but impressively, later they played popular classic punk tune ‘Prisoner Of Society’ by The Living End and again their understanding of this genre and era came through. Overall, I’m happy I was able to catch them and hope to see more from them in the future which could shine bright if they stick to what their strengths are and conquer them.

The next band on this line up was Vegas’ own punk band The Thrill Killers, whose energy, talent and presence was definitely a highlight of my night. The singer who had apparently suffered a recent encounter with broken ribs hardly seemed to let that effect his mood or performance. He tore up the audience and the stage with his tough commanding vocal presence, and his wacky, witty, fun and catchy lyrics provided the hollandaise to the ham and eggs. The bass was among the more creative aspects of the band with the deeply filled jams, and the guitar was not in your average punk format as it was filled with creative and catchy solo work that lifted these guys to an exciting level of innovation. The drumming provided just the right tie for the outfit and with the singer being reminiscent of that guy who tells all the good stories at the party, you really can’t go wrong. Towards the end of the set he also handed off the microphone to the die-hard younger generation punk fans in the front row which was definitely a heartfelt and entertaining gesture. With the zombies from outer space banter and their obvious weed advocacy, they keep the mood airy and free spirited.

As for the next band on the bill, for being placed on a punk rock show, Motorcycle Boy was the odd one out. They have primarily a classic rock n’ roll sound that has punk undertones at times, but is very bluesy, slower paced rock for the most par. They have been a local act in the Los Angeles scene for many years and have definitely gained them a solid reputation as one of those rock n’ roll bands that is still alive and kicking in today’s world that is too busy spilling over with its utterly craptastic musical genre domination such as the atrocities of Bro-Country and Dubstep. They put on a really strong and admirably professional set, and had they been on a more suited line up they would have stole the show. They weren’t completely out of their element here either, as it was still much appreciated by the audience no matter who they were there to see specifically.

Finally, Agent Orange, who had damn well better be using Orange amplifiers, took the stage by force and blew minds with their whole concept of punk and surf rock that possesses the magic of being developed over thirty-five years ago and still holds relevant today. Basically, what is legendary about them is this genre combination and how different style guitar playing can work really dynamically into punk rock vocals, lyrics, and beats. The songs are excellently varied in pace and are not particularly short or speedy, yet definitely belong in the world of punk rock. At one point, there was a hint of ska in the vocals and other times their diversity in the jam style and patterns reminded me of The Melvins. This wacky trio is a bucket list band in my opinion, and there really is not a whole lot out there to compete with in this self-created genre which makes it a unique experience that seriously completed another level and world of music for my discovering pleasures.

As far as punk rock and mosh pits go, sometimes they are gentle giants and sometimes they are as rough as nails in a coffin. This particular show, due in part to maturity levels and specific genre, was definitely more gentle giant oriented as it flowed and danced rather than collided and exploded which was a refreshing change of pace for me to see, not to mention that one young guy in the mohawk made me feel young again as well as give me a glimmer of hope for the future of punk. It’s up to you to keep supporting this vast punk and rock n roll scene so we can keep the individual rebellion alive.