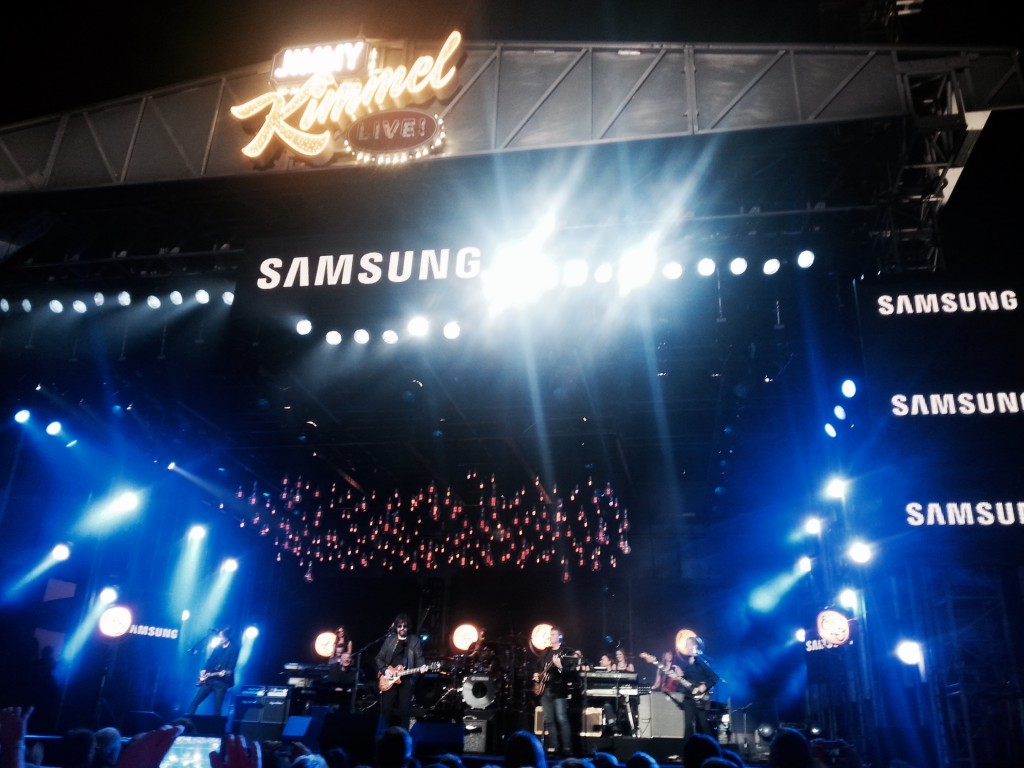 November 23rd 2015, Jimmy Kimmel Live, Hollywood CA: In the world of symphonic/progressive/art rock, English group Electric Light Orchestra has been influential and revered, with a world record of hits but at the same time with a cult following amongst rock fans. Formed in 1970, ELO disbanded in 1986, partially reformed briefly in 2000, and as Jeff Lynne remained the only original member, ELO was fully converted to the moniker Jeff Lynne’s ELO in 2012. Under this name, the group released its first album ‘Alone In The Universe’ on November 13th 2015, and Jeff Lynne and his ensemble embarked on a promotional tour, making national television appearances and playing a select few concerts. Last Monday November 23rd, they performed an outdoor mini-concert in the parking lot of the El Capitan Theatre in Hollywood for an appearance on the Jimmy Kimmel Live show, and fans young and old gathered in huge numbers for the first ELO concert in the Los Angeles area since 1981, to give the band what the show’s hosts described as ‘the best response ever from a JKL concert crowd’.

The concert audience was checked into the outdoor general admission standing area at 5:30, and while everyone waited, the in-studio portion of the JKL show was being broadcast on a giant screen. This was the Star Wars special episode, which made the waiting period more entertaining than usual. At 6:30, Jeff Lynne and his band came out on stage amidst huge applause. As he came up to announce the band, Jimmy Kimmel seemed genuinely thrilled, and admitted to not personally caring about most other musical guests they have on the show, with Jeff Lynne’s ELO being an exception. Even Don Barris wasn’t his usual self and couldn’t hold back his excitement and emotion, coming across as a real ELO fanboy. Starting with the single ‘When I Was A Boy’ off of the new album, ELO played what should have been a 4-song set but was turned into a 6-song set, much to the amusement and delight of the audience.

Aside from the new single, the band played three of their most loved hits including ‘Evil Woman’ which was the second song filmed for broadcast, but after playing that song and then ‘All Over The World’, they got word that the ‘Evil Woman’ take wasn’t quite up to scratch. So they played it again, and the crowd loved it. And then they played it once again, as the crowd went nuts. We in Los Angeles take our concert privileges for granted, but who else can boast of seeing Jeff Lynne’s ELO play ‘Evil Woman’ thrice, for free?

They ended with ‘Mr. Blue Sky’ and said goodbye to an overjoyed audience. With as many as 12 musicians on stage, Jeff Lynne’s ELO put forth a true exhibition of progressive/symphonic/concept-based rock, which isn’t ‘heavy music’ in the absolute sense but is heavy in its wealth and multitude of sonic layers. Quite a few metalheads and metal musicians were in attendance, giving an indication of the influence and inspiration ELO has had on heavier sub-genres of rock in the generations that followed them. And as has been the case with many 70s/80s rock/metal groups that have come through town recently, it was a largely young crowd which proves the longevity of the music and the younger generations’ desire to catch up on what they missed simply because it was before their time.

Although not directly ‘metal’, the music of Jeff Lynne’s ELO is recommended to every reader of this site, and those that didn’t have the privilege to attend any of the band’s shows this time around, there will be more opportunities in 2016.