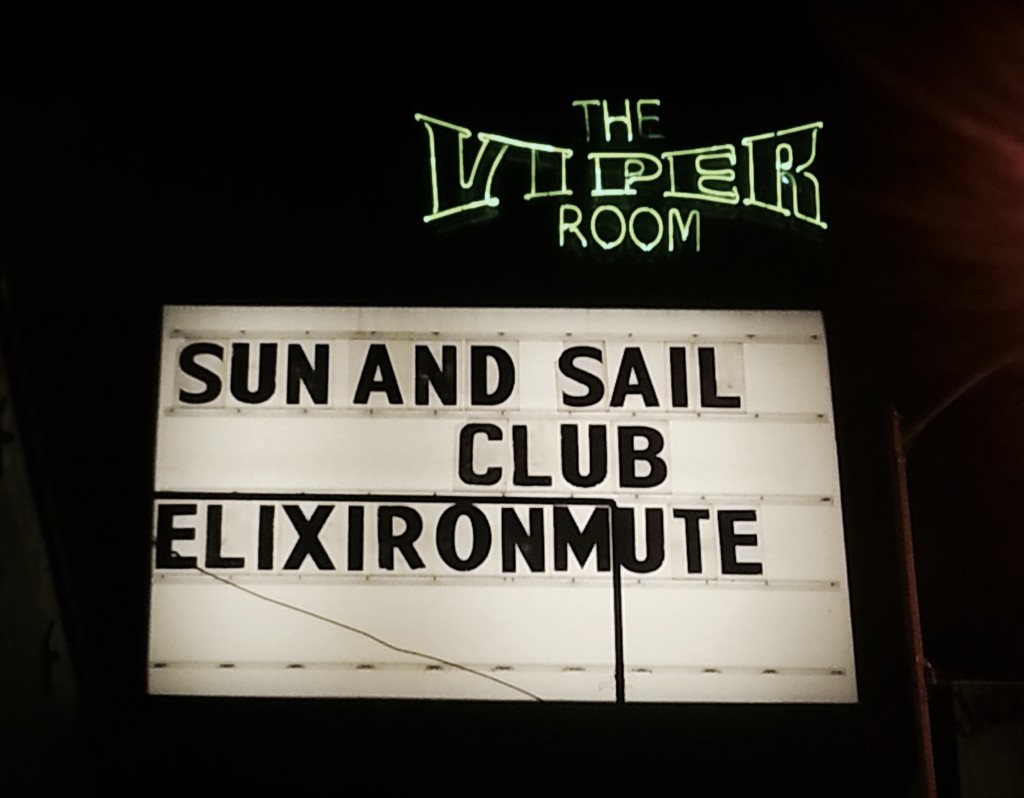 November 13th 2015, The Viper Room, West Hollywood CA: It is not often that one comes across a band comprising two members with the exact same first and last names, but when these namesakes happen to be well-respected veterans of the stoner/desert rock world, and this band they’re in together is an earth-shattering supergroup, it makes things all the more special. The group being talked about is California-based quartet Sun And Sail Club, boasting of Scott Reeder (Fu Manchu) on drums, Scott Reeder (Fireball Ministry, ex-Kyuss) on bass, Bob Balch (Fu Manchu) on guitar, and the legendary Tony Adolescent (The Adolescents) on vocals. The band started in 2013, released a debut album called ‘Mannequin’ the same year, and put out the second album ‘The Great White Dope’ earlier in 2015. Sun And Sail Club played a headline show at the Viper Room to bring their punk-infused loud violence to the masses, along with local support acts Socionic, Elixir On Mute and Here Lies The Hero, for what turned out to be an overwhelmingly enjoyable experience for attendees.

Doors opened at 8:30, and at 8:45, the show began with post-hardcore quintet Here Lies The Hero. This was a very diverse lineup with each band vastly different from each other, and Here Lies The Hero were very much unlike any of the other three bands but they provided a more-than-decent start to proceedings with a performance that, despite the low turnout in the venue at this point of the evening, was delivered with energy and conviction. The music mainly comprised melodic guitar work with vocals alternating between clean and harsh, backed by hard-hitting groove-laden rhythm, and compelled the audience, including those that weren’t necessarily fans of this style, to take notice and applaud genuinely. Here Lies The Hero have been around for more than six year, and for the kind of music they’re pursuing, they are doing it right.

Next up was Elixir On Mute, the trio led by guitarist/vocalist extraordinaire Jordan Ferreira, bringing their progressive funk/shred gravy to the stage. Elixir On Mute is without doubt one of the weirdest and most entertaining live bands based in Los Angeles, and each time they play, they succeed in taking audiences by surprise and winning new fans, as was the case here. Besides his almost uncontrollably brillant guitar playing, Ferreira’s talent as a vocalist alone is the standout feature of this band, and proves that there is no substitute for good clean singing. The Viper Room was a lot more packed during Elixir On Mute’s set, and they ended amidst huge applause.

An Elixir On Mute set is invariably followed or preceded by Socionic, as the two bands seem to have formed an LA prog alliance which is great for the bands and fans alike. On this occasion, Socionic played after Elixir, and put on a performance that completely floored a packed house at the Viper Room and emphatically exceeded the expectations of even their longtime fans in attendance. Through past gigs, Socionic carried a reputation as a compelling progresive/alternative/post-industrial metal band with great clean vocals, solid grooves and excellent guitar work. But while still exhibiting all these qualities, Socionic sounded incredibly heavy at this show. In fact, this was the heaviest set I’ve ever witnessed by anyone at the Viper Room, and I have been to a lot of shows here. The sound was so clean and massive, I took out my earplugs to absorb it in all its glory. A lot of bands criticize the sound quality at this venue, but Socionic proved that you just have to know how to work with the in-house sound crew. Besides, Socionic brought their own lights and did not use the house lights at all, which deemed them a visual standout of this event and re-established the fact that a band bringing their own light show to accompany their music makes a big difference to their overall impact. Fronted by the owner of one of the finest clean singing male voices in town, Michael Meinhart, Socionic played songs mostly from their new album ‘Dividing Horizon’ which actually released on this date, and this gig was its official release party. Socionic also features the talents of bassist Matthew Denis, who pulled double duty here also playing bass for Elixir On Mute. One of the most prolific bassists in LA, Denis will surely do a show some day soon wherein he’ll play in every band in the lineup. Overall, this was an unbelievably supreme performance by Socionic, one that left the audience stunned and overwhelmed.

And lastly, it was the turn of the headline act Sun And Sail Club to shake the foundations of this place with their brand of heavy worship, piercing ears and crushing skulls through full-stack amplification, a rare sight in itself at the Viper Room. This band’s style of musicianship is very distant from that of the support acts, and even though unfortunately the fans of those bands departed the venue, the stoner/desert rock faithful turned up to support Sun And Sail Club, and did not regret doing so, as this turned out be another band at this event that delivered more than what was expected. Bob Balch riffed it up on guitar, Scott Reeder punished the drums and the other Scott Reeder was in his zone, barefoot and rocking his lit bass, and while these three went about their business relentlessly with ease, frontman Tony Adolescent gave the crowd plenty of reason to lose their minds, leading short violent punk-filled outbursts that gave his band mates’ instrumentation a whole new personality that’s missing from nearly all other bands in this sub-genre. What most stoner/doom bands are attempting to accomplish with 10-plus minute jams, Sun And Sail Club succeed in outclassing with 2-minute songs, presenting the very same musical elements but with an undeniably spark. Among these fast, to-the-point belters was a song called ‘Fever Blister And The Great White Dope’ which was the highlight of the set. It presented the slowest musical passages of the set, but was still less than five minutes long, and intermittently switched to faster segments. One hopes that Sun And Sail Club become a band and discard the supergroup tag, because they clearly have a lot to offer, with music that’s capable of outlasting trends.

All in all, it has to be said that I’ve seen more shows at the Viper Room than anywhere else this year, and this was by far the best of the lot, so much so that it made me forget about the ‘no re-entry’ rule because I simply did not step outside the room at any point during the show. A truly fantastic night of diverse heavy music.