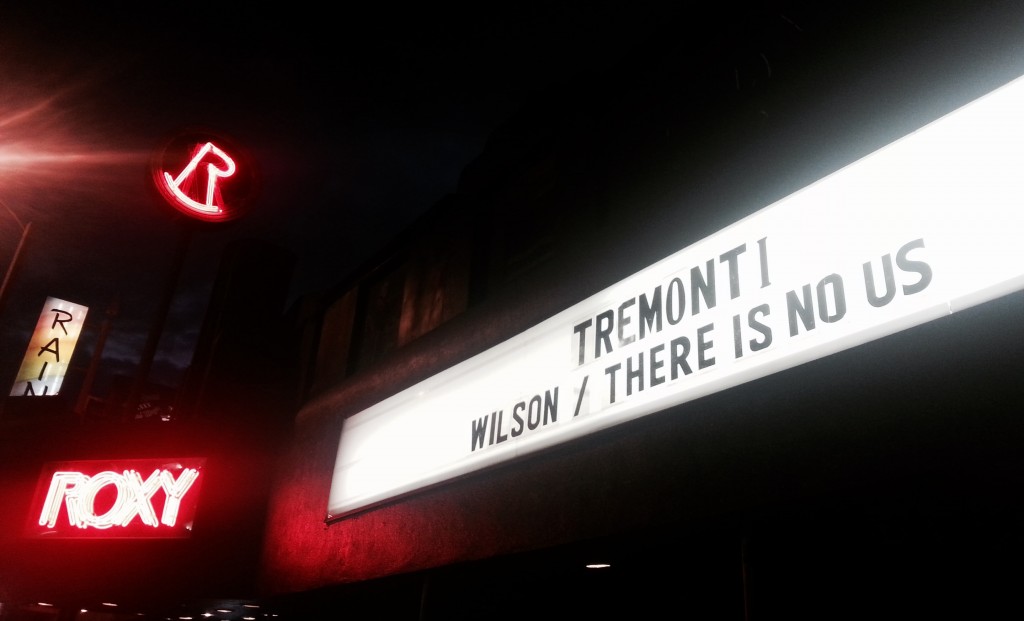 October 12th 2015, The Roxy, West Hollywood CA: Mark Tremonti, known for most of his musical career as the guitarist of Creed and Alter Bridge, carved out an entirely new identity for himself during the past three years, born purely out of a style of music he grew up loving. Tremonti formed his heavy metal solo project in 2012, released its aptly titled debut full-length album ‘All I Was’ the same year, and followed it up with the 2015 release ‘Cauterize’. Currently on the ‘Hard Drive Live’ North American co-headline tour with Trivium and opening act Wilson, Tremonti visited the Los Angeles area on an off-date in the itinerary, for a headline gig at the Roxy in West Hollywood with Wilson as main support and There Is No Us as the opener. Tremonti fans turned up in excellent numbers on this Monday evening, and were in for a treat.

Doors opened at 7, and at 7:30, There Is No Us, a new band formed by ex Marilyn Manson bassist Andy Gerold, started proceedings with a 30-minute set. They were nothing beyond ‘entry-level’ metal, and their usage of keyboard parts would have been far more impressive if they had a human playing them instead of using backing tracks. But the singer put in good energy and carried the show. There Is No Us appealed to this demographic and received a positive response from a majority of the crowd.

There Is No Us photos:

Next up at 8:20, Detroit hard rock quintet Wilson took the stage, and clearly reveled in the extended opportunity presented to them to play a 45-minute set, much longer than what they’ve been getting to do as opening act on the Trivium-Tremonti co-headline tour. Singer Chad Nicefield was the lifesblood of this performance, getting the entire crowd on his side with his vocal delivery, energy and interaction, while his band mates weren’t far behind by any means. Wilson succeeded in blending their Motor City blue-collar ethos with the type of party-oriented hard rock that would go down well with any audience on the Sunset Strip, particuarly on tunes off of their new album ‘Right To Rise’ which was released earlier in 2015 via Razor And Tie. The title track of this record was, in fact, the highlight of this set, and took it to its peak. The crowd did not hold back in showing their unanimous approval of this band, and just like they did on this very stage two years ago as part of a lineup that comprised Scorpion Child, Kadavar, Gypsyhawk and Mothership, Wilson walked away with a legion of new fans, and can certainly mark this as a successful outing.

And promptly at 9:30, Mark Tremonti appeared on stage with his band and opened a 15-song set of uninterrupted, unabated heavy music with the title track off of ‘Cauterize’, after which he delved into a skull-crushing assortment of tunes from both solo records. Saying that Tremonti’s solo material is heavier than anything Creed or Alter Bridge ever put out would be a massive understatement, but on stage, Tremonti’s band outdoes its own efforts in the studio, as evident from the sheer sonic massiveness of this performance. This Tremonti set was just about as loud and heavy as anything the Roxy has ever witnessed, which says a lot for the genuine intention behind this project and comes as an extremely pleasant surprise to those unaware of this facet of Mark Tremonti’s musicianship.

Mark Tremonti’s guitar-playing was exemplary for a heavy metal guitarist/vocalist frontman, and he made it seem like he had been doing this project for decades. His singing proved that clean vocals can fit with the heaviest variants of metal if sung well. His band mates were up for the challenge of matching him note for note, the drummer in particular. Every song had its moments in this all-killer, no-filler set, but ‘Flying Monkeys’ off of the ‘Cauterize’ album was perhaps the standout, with its slow, heavy, Sabbathy nature. The set progressed from heavy mid to low tempo tunes that pleased the headbangers, to fast thrashers for which Tremonti demanded mosh pit action. The crowd gave Tremonti an expectedly tremendous response but did not follow the mosh-pit instructions, until the pit finally opened up for the very last song ‘Wish You Well’, albeit for a very friendly mosh. Besides rocking the audience, Tremonti also stayed to do a meet-and-greet/signing session with anyone and everyone that purchased something from the merch table. The paying fans most definitely got their money’s worth here.

Mark Tremonti is undeniably doing something noteworthy with this project, and for metalheads that haven’t had a chance to hear it or simply haven’t bothered to do so, attending a Tremonti concert is highly recommended, because as a live band, Tremonti succeeds in changing opinion and turning detractors into fans.

To enjoy pro-shot HD 1080px videos of the songs ‘Dark Trip’, ‘All That I Got’ and ‘Arm Yourself’ from this show, visit our YouTube channel.