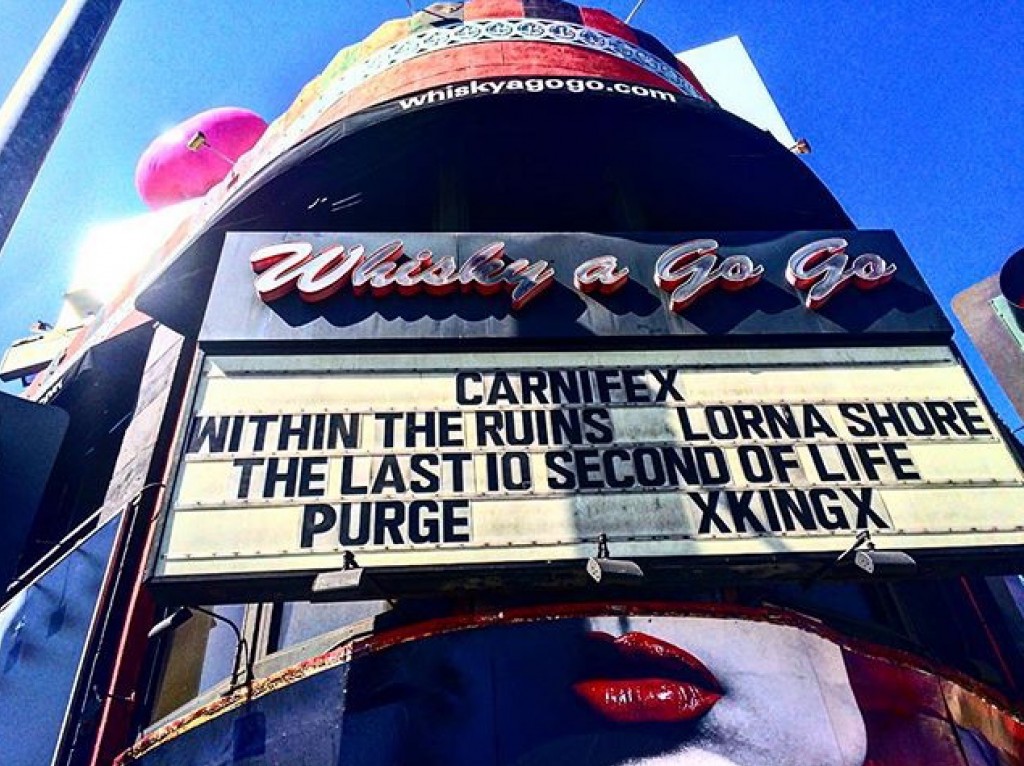 October 7th 2015, The Whisky-A-Go-Go, West Hollywood CA: San Diego deathcore band Carnifex are celebrating their tenth anniversary in 2015. With five studio albums and several national and international tours to their name, they’ve been a highly active group on and off stage and stand strong as worthy representatives of the deathcore genre. To mark the milestone, Carnifex embarked on the ‘Decade Of Despair’ North American headline tour with support acts Within The Ruins, Black Tongue, Lorna Shore and The Last Ten Seconds Of Life last Wednesday October 7th 2015 and started the run with a gig at the Whisky in West Hollywood. Our writer Lisa Burke was on-site to review Carnifex’ set for us:

Last Wednesday night as I entered the Whisky-A-Go-Go into a fully packed room around 9:30 PM, I realized I had arrived there just in time to see Carnifex, a deathcore band from San Diego. Rumor has it that the Whisky likes to end deathcore shows early by 11 PM because they think we are all a bunch of hooligans looking to tear up the joint with our guns and heroin so they sway some people away this way, and I suppose all they really accomplish is less vomit on the floor. I always make it a point when they check the contents of my purse to ask if the heroin and shotgun I brought in is OK. They usually let me slide, but I wouldn’t recommend trying this at home. All nonsense aside, the Whisky-A-Go-Go is still a great intimate place to see any live show.

Interestingly enough, I’ve not seen a gentler mosh pit than the one at this show since I was 15 years old. Carnifex originated in 2005 and therefore has a younger fan-following because of its genre. I grew up going to primarily deathcore, hardcore and punk shows because that was what rolled through the small town in upstate NY where I was raised, and that was the heaviest sound I could get live on $5-10 of allowance money. My point here is that this scene is not dead, and in my head I fit right in with the “kids”. The vocal stylings of this band is a good range from simple death groans to Dying Fetus-esque gutterals. It’s captivating, and the dismal self-loathing yet witty lyrics somehow becomes pleasantry to the ears. The guitars have more technicalities and interesting complications in the riffs than your typical metalcore band, pushing in the death metal direction while adding a sprinkling of black metal. With song titles such as ‘Dark Days’, ‘Slit Wrist’, and ‘Die Without Hope’ it’s a wonder these guys haven’t off’d themselves yet, and however ironic it may be, I know this is what puts a smile on the band members’ faces as it does the same for the fans. Never die with the music still inside you, and once it’s out, laugh about it.

Deathcore shows are fun because at least one song involves jumping, so my nightly exercise routine can totally be completed at a Carnifex show. The drumming was tastefully blasting beats at every chance it could get, and there were really no dull moments in their hour-long set, not to mention the band has great fashion sense that pushed their tunes to a more sophisticated level. A slight mosh pit fashion trend amongst the youngster crowd that I noticed happening was the sideways baseball cap look, and while I really have no criticism on its appropriateness at this show I’d like to point out that no girl has ever said ‘look how hot that guy looks in that sideways baseball cap’.

Moving back to the tunes, they had a perfectly appropriate last song called ‘Hell Chose Me’ where the chanting of ‘I didn’t chose hell, hell chose me’ happens and it’s a really great time until they have to leave the stage and it lights on fire and Satan appears to take a few audience members away, or maybe they just turn off the lights and shut down the venue even though the latter isn’t nearly as much fun. Since this is a deathcore band and it reminded me of my teenage angst years, I absolutely left riled up with the angst for about the next 45 minutes, but it was all worth it.