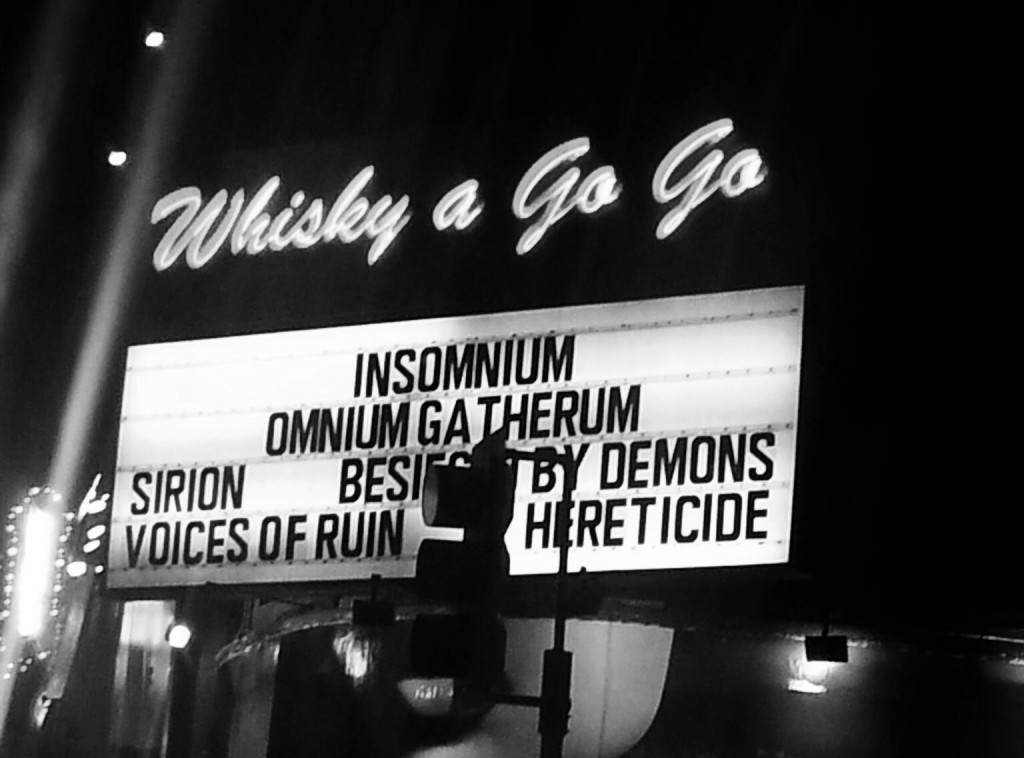 August 27th 2015, The Whisky-A-Go-Go, West Hollywood CA: Longstanding Finnish melodic death metal quartet Insomnium released their sixth full-length studio album ‘Shadows Of The Dying Sun’ via Century Media Records in 2014, toured North America with Dark Tranquillity in early 2015, and are now back in the continent for their own headline tour, with support from fellow Finnish melodic death metal group Omnium Gatherum, arriving in Los Angeles for a gig at the Whisky-A-Go-Go in West Hollywood last Thursday August 27. This is a strange tour for Insomnium, with two of three original members guitarist/vocalist Ville Friman and vocalist/bassist Niilo Sevänen are both sitting out of the lineup and have been replaced by stand-ins Nick Cordle and Mike Bear respectively. But LA fans still turned up to the Whisky in huge numbers for this double bill of Finnish metal, and were treated to a show that met their expectations.

But aside from the touring attractions, the lineup for this show featured some strong local support, from those that truly deserved to be sharing the stage with such bands. At 8:45 Voices Of Ruin started a 30-minute set decorated with powerful growling vocals, well-crafted, pristine-sounding shred guitar solos and harmonies, and a solid, upbeat rhythm section. These guys are no newbies, and carried themselves on stage in a manner just as professional as either of the main acts of the evening, as was clear from the excellent response they got from the crowd. The volume of cheers was high and the mosh pits were violent, so much so that one or two unfortunate souls got booted from the venue. On any given night, attendees of Whisky shows usually do not care to see the local openers and prefer to hang out at the Rainbow instead, but it was heartening to note that Voices Of Ruin got a decent turnout because their performance was worthy of that and more.

Next up, Los Angeles’ finest young six-piece metal group Sirion made a rare live appearance and entertained the crowd with their self-created blend of shred, melody and crab-dancing. I always give credit to these dudes for succeeding to fit all of their members and equipment on that Whisky stage, which they hardly ever get to use fully because the headliner’s drumkit is already set up on it. Aside from the fact that it was their first show in this area in a long time, the set felt different because of the influx of newer material which is taking Sirion in a more epic, progressive direction in comparison to the older tunes. It was understandable that they focused on new songs, but a longer set would present the real Sirion experience with a better balance between the old and the new. Regardless, all six members put forth mighty fine performances and were appreciated by the crowd, the keytar solos standing out as the most enjoyable visual aspect of the show. Here’s hoping Sirion becomes as active as they once were.

The crowd increased in number as most of the Rainbow regulars had now made their way over to the Whisky after deliberately skipping two great local acts, and at 10:20, the six members of Omnium Gatherum walked onto the stage in front of a gathering that was here for them as much as they were for Insomnium. In the 45 minutes allotted to them, they presented great selections from their six-album discography, along with a taste of some brand new material that will be included on the impending seventh album. The variety in their set was supreme as they mixed up the tempo well from faster to slower compositions and maintained fans’ interest, generating mosh pits and singalongs at regular intervals. The turnout here for them was sheer proof of the longlasting positive impression they made on their previous North American tour with Dark Tranquillity in 2014, and based on the level of their performance at the Whisky, it is only going to keep getting better for Omnium Gatherum.

And finally at 11:25, the house lights slowly faded to black, signaling the arrival of Insomnium onto this stage. Fans rushed to get as close to the front row as they possibly could, and the band opened in a highly impressive manner with ‘The Primeavl Dark’ and ‘While We Sleep’, the first two songs from the 2014 album ‘Shadows Of The Dying Sun’, the sonically rich combination of melodies and heavy riffs capturing the audience’s imagination straightaway. The band proceeded onto play three more selections from the latest release, but punctuated them with older material which was expectedly better recieved by the fans.

Stand-in frontman Mike Bear did a commendable job on portraying himself in a role played by someone else for the past 18 years, although longtime fans of the band were reported saying that the original frontman was definitely missed. By Bear’s side was one of the finest, most talented journeymen going around in metal, Nick Cordle. From Arsis to Arch Enemy to Sanctuary and now Insomnium, Cordle moulded himself as the perfect fill-in guitarist of this band and contributed more-than-decent clean vocals as well. There is no doubt that given a chance, he can play for just about any band on this planet.

Despite it being a slightly unusual experience in terms of the lineup, Insomnium fans seemed to be fully enjoying the set and did not hold back in reciprocating their energy towards the lively quartet on stage. There are a lot of comparisons made between bands comprising the European melodic death metal sub-genre, but from the perspective of a first-timer it has to be said that even with a four-piece setup and no keyboards, Insomnium are as strong in creating extremes between melody and heaviness as any of their fellow European groups, even those with more members.

All in all, a fine melodic death metal evening at the Whisky, and the remainder of the tour is a must-attend for fans of this musical style in North America.