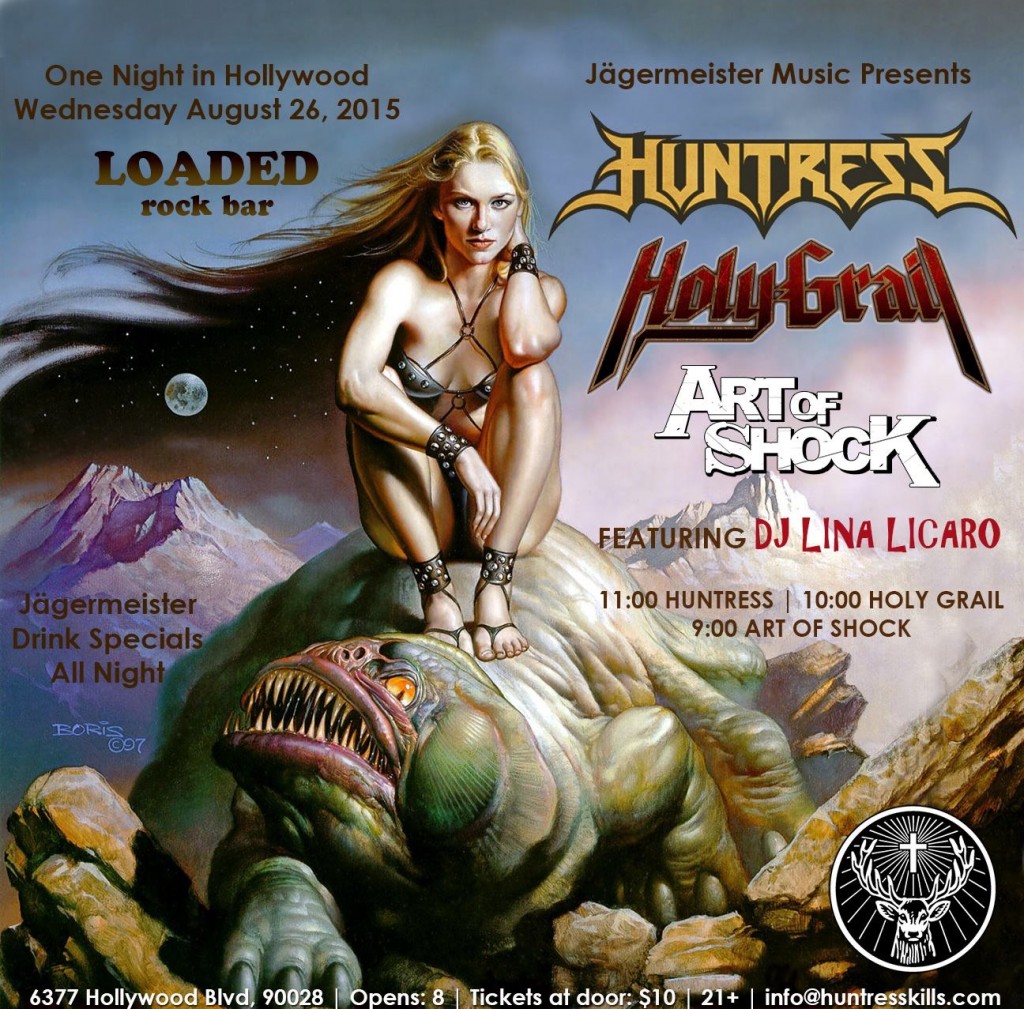 August 26th 2015, Loaded Rock Bar, Hollywood CA: Los Angeles-based heavy metal warriors Huntress and Holy Grail combined for a one-off gig at Loaded Hollywood last Wednesday August 25, along with local thrashers Art Of Shock as opening act. Making a long-awaited appearance in front of hometown fans, Huntress and Holy Grail succeeded in packing the venue to capacity even on a school night, turning it into what felt like a weekend for all involved.

Doors opened at 8, and an hour later, Art Of Shock, featuring fill-in bassist Sam Harman (Legal Tender), opened the show with a 30-minute set of traditional thrash metal that ended with a solid rendition of Testament’s ‘Into The Pit’. Thrash as a sub-genre has not evolved nearly as much as other styles of metal and its originators are still writing largely the same type of songs they wrote three decades ago, and as a result, the interest in thrash among metalheads has diminished significantly over the years. That said, Art Of Shock are certainly good at what they do, have been doing it for a few years, and undeniably served to be a good fit as openers of this lineup. Kudos to them for sticking to their guns, playing the musical style they love most regardless of popularity (or lack of), and still not only attracting an appreciable number of people to see them perform, but also getting a more-than-decent response.

Shortly after, Holy Grail went about their mission of destroying the stage with a fist-pumping, ear-piercing assortment of scorching traditional shred, and emerged from it with overwhelming success. Based on the millions of times I have seen Holy Grail in concert, it has to be said in all honesty that this was the best Los Angeles crowd they have played in front of, in a long, long time, because usually they’ve been the kind of band that’s appreciated to a far greater extent outside of Los Angeles. The mosh pits were limited only to the final song ‘My Last Attack’, but heads were banging non-stop, chorus lines were being sung along loud and clear, and the applause between songs was roof-shattering. The set was well-compiled with tunes from the two full-length albums, although one item worthy of being a permanent fixture in that set list, the ‘Crisis In Utopia’ title song, was missing. Besides, ‘Rains Of Sorrow’ should make a comeback, as it singlehandedly adds a lot of variety. But the brand new tunes ‘Sudden Death’ and ‘No More Heroes’ blended in brilliantly, and the set flew by before anyone realized it. Los Angeles finally gave Holy Grail the response they deserve, and now awaits a headline show.

And lastly, Huntress took the stage as the headline act of the evening, playing to a completely packed house. It has to be pointed out that the last two times I saw Huntress was on Mayhem Fest 2013 and as opening act for Danzig at the now extinct Gibson Amphitheatre, and both times I was utterly unimpressed. So I went in with zero expectations, and came out of the show with a more positive outlook on the band than I’ve ever had. Frontwoman Jill Janus has adopted a far more conservative approach in her outfit and stage presence, and is now focussing on her singing more than anything else. Her clean singing has matured admirably over the two years during which I did not see this band, but I am still unable to appreciate the screechy vocal segments she goes into for some parts of each song, and I feel it’s an unnecessary element in Huntress’ music. The addition of two Holy Grail members, guitarist Eli Santana and drummer Tyler Meahl, has improved the band’s on-stage personality even though the audience’s attention still undividedly remains on Jill. For this gig alone, Spencer Jacob-Grau from local band Occult Wisdom filled in on bass. Huntress ended on the worst possible note with the abominable ‘I Want To Fuck You To Death’ but the rest of their set was compelling enough to make even their harshest critics stay inside the room and nod in approval.

Overall, this was an extremely pleasant night out for metalheads and Loaded regulars, and this is the kind of show the venue needs on a more regular basis on school nights.