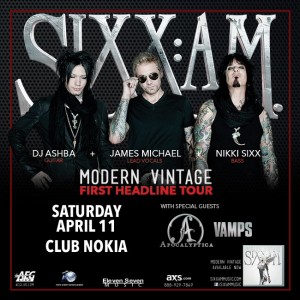 Doors opened at 8, and the show began at 9 PM as Vamps took the stage for a set that lasted 30 minutes but seemed much longer. They put forth a performance littered by bad vocals and generic instrumentation, and the only thing memorable about them was their rendition of Mötley Crüe’s ‘Live Wire’, a cute attempt to win over the Crue/Sixx fans in attendance, but turning out to be the worst rendition of that song I’ve ever seen in my life, and this includes the incredibly sub-par recent live versions by Crue themselves. 9:30 could not come sooner.

In complete contrast, the immensely talented gentlemen in Apocalyptica hit the stage next for a 40-minute set that was far too short for people that attended this show specifically to see them. This Finnish band began more than 20 years ago as a group of four cellists covering Metallica songs, but then they covered other bands, developed their own instrumental material, added drums, and at times incorporated guest vocalists into their compositions. They are the only band ever to dare to play Metallica covers while opening for Metallica, an event I felt fortunate to witness in Tucson, Arizona in 2008. Fast-forward to 2015, they have their eighth studio album ‘Shadowmaker’ awaiting its April 21 release via Eleven Seven Music/Better Noise Records, and they recruited Franky Perez to not only sing tunes on this album but to do it every night on this tour as well. 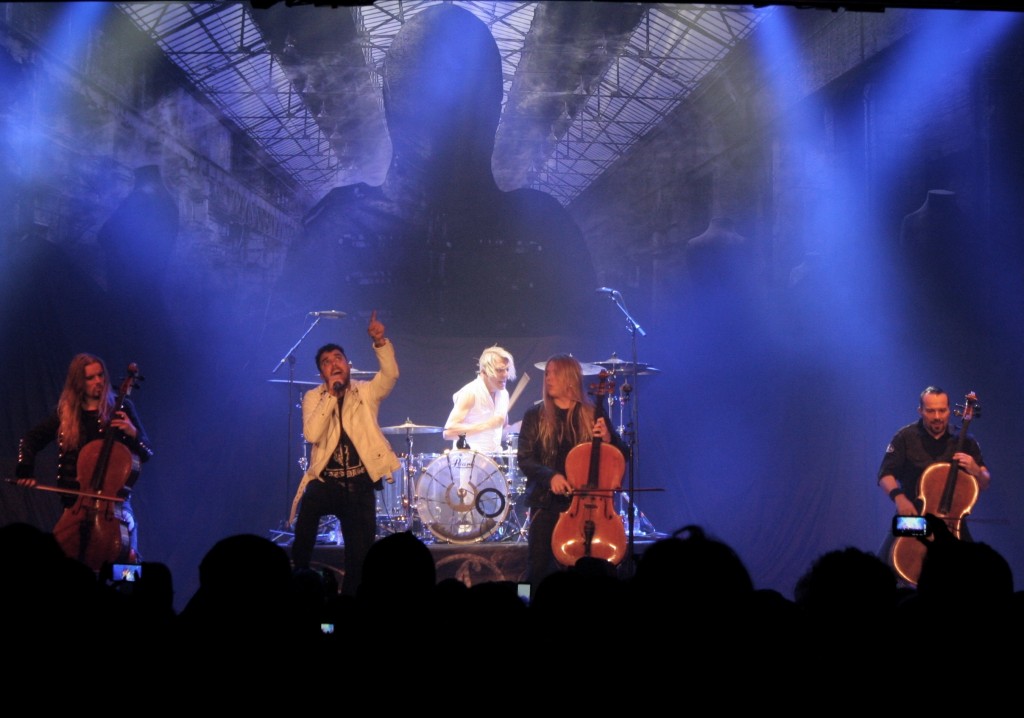 Perez has undoubtedly proved his vocal abilities in the various projects he’s been involved in over the years, has received positive reviews on this website, and on paper it seemed like a great choice. But in all honesty, the new tunes sounded much too ‘radio rock’ for longtime Apocalyptica fans’ taste, and it had more to do with the songwriting style itself than Perez’ performance. That being said, his delivery on “I Don’t Care” off of the 2007 ‘Worlds Collide’ album was not particularly impressive and did not do full justice to its studio recording which featured Adam Gontier of Three Days Grace. There is certainly room for improvement as far as Perez’ involvement in Apocalyptica’s live show is concerned. But that aside, Apocalyptica obliged fans by presenting some of their classic instrumental cello metal, in the form of tunes like ‘Grace’, ‘Inquisition Symphony’ and ‘Hall Of The Mountain King’, along with Metallica’s ‘Nothing Else Matters’, far better than the original band’s live version at this point. Based on this set list and performance, while I would not honestly recommend readers to purchase the new Apocalyptica album, as long as they include the older tunes in the set, seeing them in concert is still quite a treat, and Los Angeles fans will certainly look forward to a headline show from them soon enough.

And lastly at 11 PM, Sixx:A.M. began their lengthy set of music that came across as neutered rock. Their studio material does not sound anything out of the ordinary, but when a band presents the same music on stage it can be a totally different proposition, specially when it boasts of talented and experienced musicians. Unfortunately this was not the case whatsoever with Sixx:A.M., and theirs was one of the flattest, most boring 90-minute sets of live music witnessed in a long time. The talents of DJ Ashba are most certainly not utilized in this band and it is nothing but a waste of time for an excellent guitarist like him. The same can be said about Nikki Sixx, who remains as one of the very few positive aspects of modern-day Mötley Crüe. Credit must be given to Sixx:A.M. for attempting a stage production to go with/distract from the music, but the usage of an array of excessively bright lights positioned directly in the backdrop throughout the set created a blinding impact, making the performance hard to watch. Sixx:A.M. as a live band can be perhaps best described as a combination of a heavier Nickelback, a weaker Powerman 5000 and a low-budget Mötley Crüe, and failed to make any positive impression.

Apocalyptica’s performance alone makes this show worth the ticket price. Readers in the US that can afford it are encouraged to attend a show but arrive late enough to miss Vamps and leave after Apocalyptica finishes their set. Overall, this touring lineup makes for a thoroughly entertaining evening but for more reasons negative than positive.