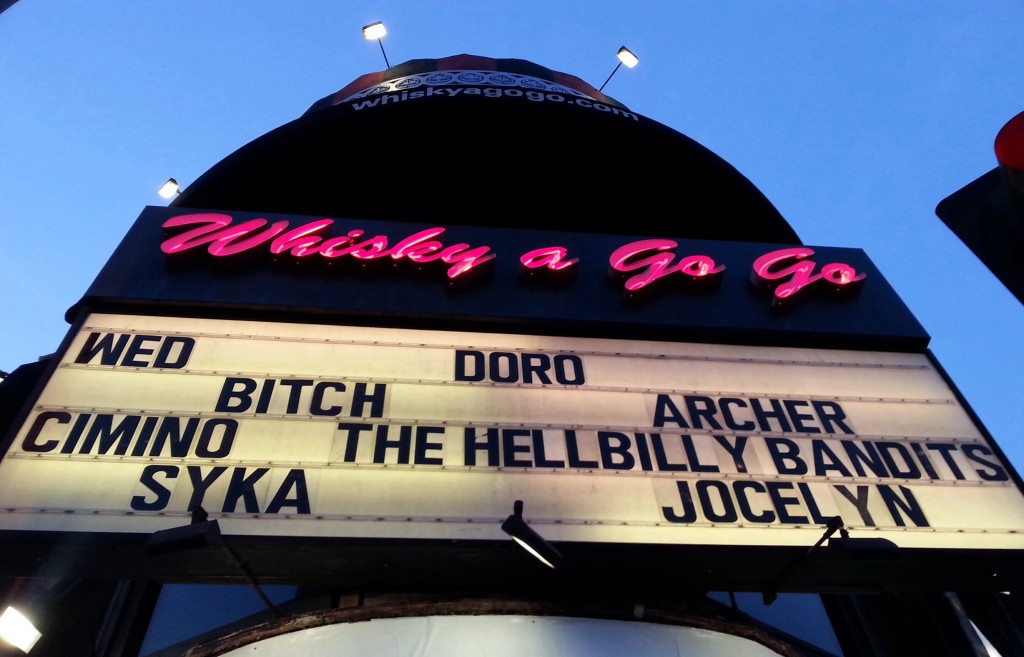 March 18th 2015, The Whisky-A-Go-Go, West Hollywood CA: It’s not very often that German metal queen Doro Pesch tours the United States, the West Coast in particular, so whenever she announces her band’s return to our part of the world, it’s an event in the true sense of the word and is surrounded by genuine anticipation. At the very end of her latest US headline run, Pesch and her band visited Los Angeles to play at the Whisky in West Hollywood last Wednesday March 18th, along with touring support band Archer from Santa Cruz CA and a whole slew of strangely interesting and diverse one-off opening acts.

Doors opened in the early evening, and there was good buzz in and outside the Whisky as many Doro fans showed up early. This was no ordinary Whisky gig with your usual run-of-the-mill pay-to-play local openers, as this lineup was full of bands that had traveled from far and wide to be a part of the show. Reno, Nevada’s The Hellbilly Bandits hit the stage at 8:45 for an entertaining set of straight-up Southern rock tunes and did not let their long drive from their hometown go to waste. Following them was Cimino from Kansas City, presenting a brand of hard rock that’s not new or out of the ordinary but they executed it well with really crisp-sounding guitars and solid vocals and got a positive reaction from most in the audience. The show was running smoothly so far, albeit about 10-15 minutes behind schedule, but soon after, touring support act for Doro, Santa Cruz’ Archer got their turn and their three-piece setup put forth a much more stripped down and simpler hard rock sound, but the trio showed their skill and worth as they still sounded heavier and richer than any of the openers. This tour must surely must have been worthwhile for Archer, because with performances like this they would have gained a lot of new fans.

The wait for the two main acts was definitely long but the quality of the openers made the Whisky a worthwhile hangout for those that turned up early. But the atmosphere heightened tenfold in excitement and the crowd came closer to the stage as the clock struck 11 and Bitch began their 45-minute set which can be best described as righteously LA, because Betsy Bitch and her cohorts brought the quintessential LA 80s metal vibe to this stage and her hometown audience was loving every moment of it. Her voice has aged beautifully and she still possesses the same spark in her stage presence as she did all those years ago, a true frontwoman in complete command of the stage and the entire audience. She showed her class and professionalism, knowing exactly how to hit the high and low notes, and what jokes to crack prior to each song. Considering the fact that Bitch really does not play live often these days, their sonic tightness and perfection as a group was, in all honesty, pleasantly surprising, and an indicator of the amount of preparation they must have put behind this gig. One could not have imagined a better prelude to a Doro set. 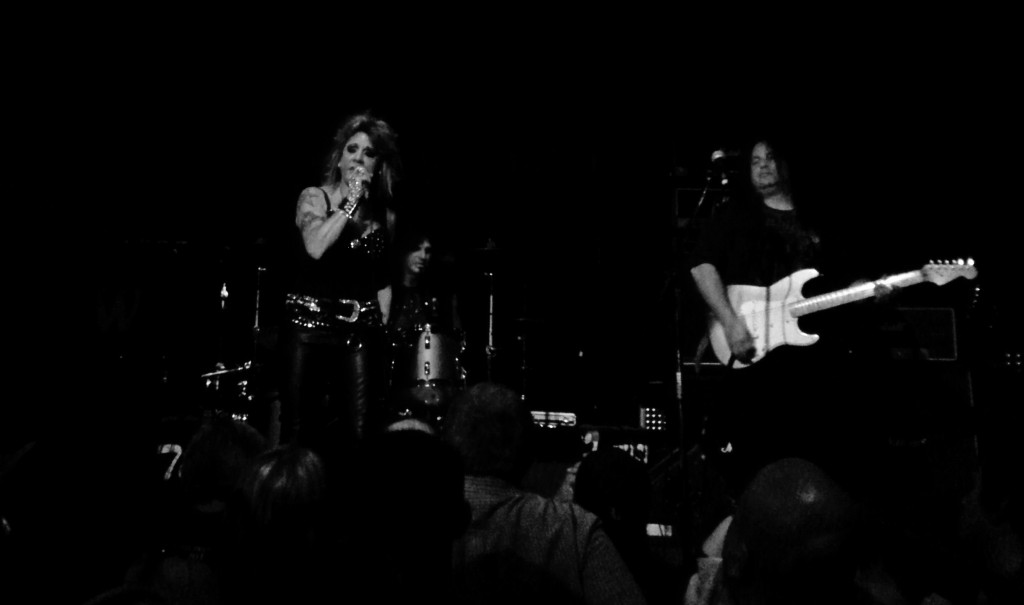 After the end of Bitch’s set at 11:45, a long period of lull ensued, feeling like an eternity as the anticipation and restlessness for Doro’s appearance grew amongst the audience. At 20 minutes past midnight, after a rather contrived and unnecessary five-minute intro tape played over the PA during which all members of the band just stood and waited for the intro to be over, Doro Pesch, at long last, walked onto the stage amidst deafeaning cheers. I have been to literally every metal show at this venue in recent times and 00:20 is most definitely the latest a headliner has ever gone on, but it turned out to be worth the wait and then some, as Doro put on a memorable show of epic proportions. 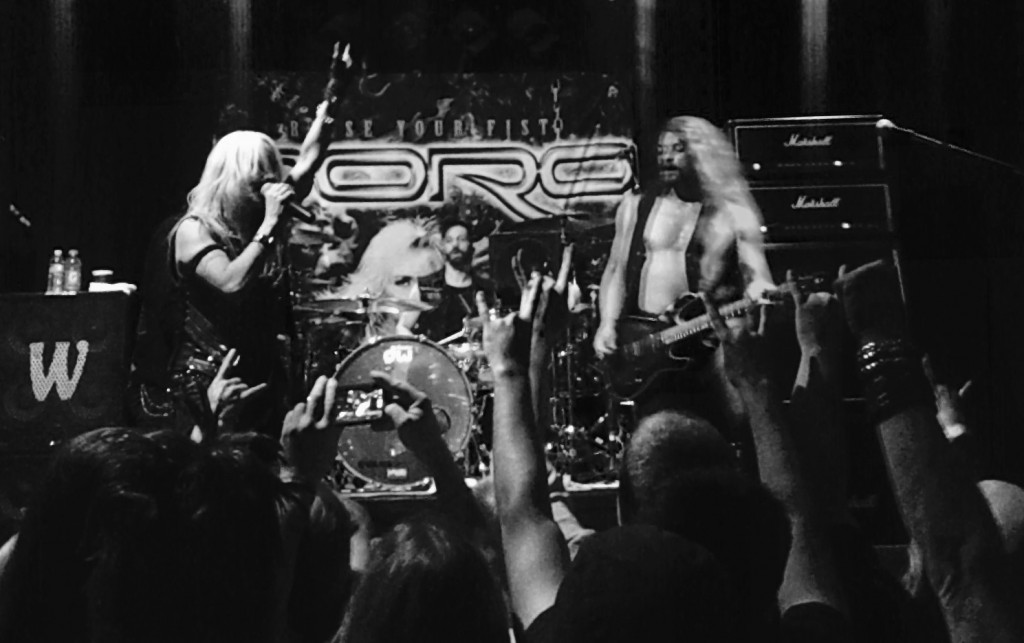 The great Warlock classics and selections from the Doro catalog were played, and upon the crowd’s request, a cover of Judas Priest’s ‘Breaking The Law’ was also included. Even though Doro Pesch admitted that her throat was beaten up from all the shows on the tour and that it was difficult and physically stressful for her to sing these songs, she happily gave it more than her 100 per cent for her devoted LA fans and succeeded in sounding as solid as ever. She was hugely grateful to the crowd for their support and at times got so emotional from the fans’ unending loud cheers that she almost cried. On a lighter note, at one point she punched herself in the head as a gesture to the crowd to bang their heads on the next song, and a puff of makeup powder flew off her face.

Tunes like ‘I Rule The Ruins’, ‘Earthshaker Rock’ and ‘Burning The Witches’ were well-received items in the initial part of the set, and then as the band settled into a groove, the performance started hitting its peak, with songs like ‘Metal Racer’, ‘Raise Your Fist In The Air’ and ‘Pure As Steel’, but the highlight of the entire set in my opinion was the goosebump-inducing ‘Unholy Love’, sang with much expression and emotion by Doro and perfectly backed up by her band. There was no dull moment in this performance, as fan favorites came one after another. The Wacken anthem ‘We Are The Metalheads’ was one of the more entertaining singalong offerings towards the closing portion of the set, as was ‘All We Are’, which also featured guest vocals from Jeff Scott Soto and members of Archer. Tommy Bolan, who worked with Doro in Warlock, joined the band for a couple of Warlock tunes at the very end, and at around 1:50 AM, Doro Pesch and her band said their final goodbyes. 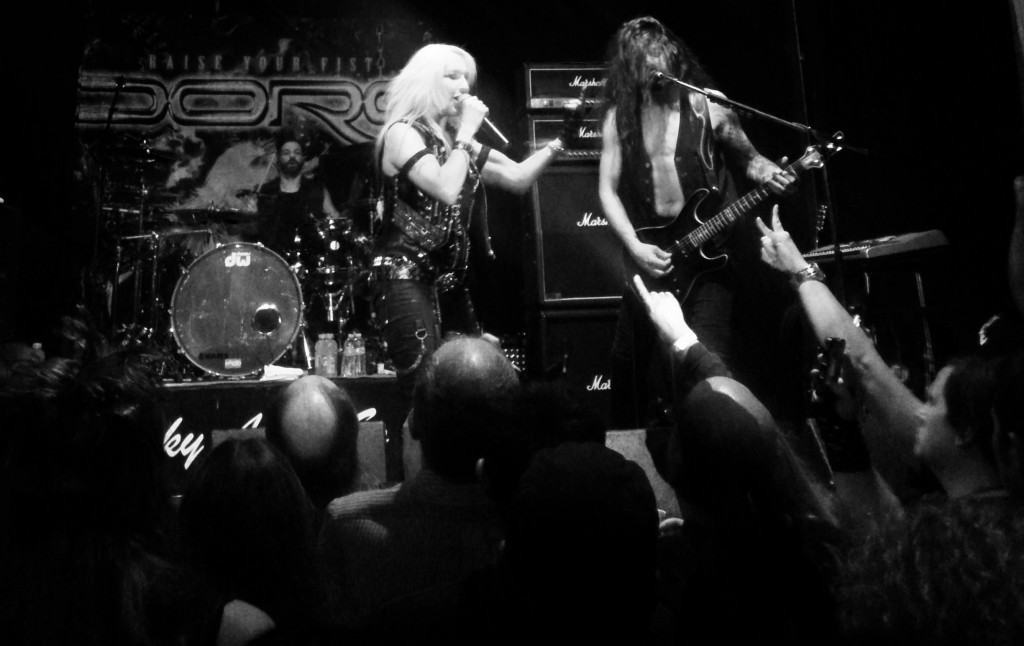 If it takes another three years for Doro to perform in LA again, with this performance she has ensured that she will remain in the fans’ memory the entire time. The queen, in sickness and in health, still has what it takes to rule the metal masses.