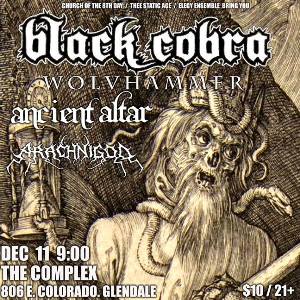 December 11th 2014, Complex, Glendale, CA: San Francisco doom/sludge duo Black Cobra just concluded a ten-day US West Coast tour with support act Wolvhammer, including a Los Angeles area gig on Thursday December 11 at one of the most favored spots for underground music, Complex in Glendale. Ancient Altar and Arachnigod provided local support at this event put together by the local conglomerate comprising three great establishments Church Of The 8th Day, Thee Static Age and The Elegy Ensemble. Our writer Darshun was in attendance along with the man behind the camera Matt Nielson to capture the action for us through images and words.

It was another late night show off the beaten path at which I was excited to see all four bands for their diversity in doom. It was my first time seeing Arachnigod, the Orange County black metal quartet. The singer and guitarist brought a good amount of energy to the stage. Musically, they didn’t quite pique my interest but my first impression of the band wasn’t a bad one.

Next up, Ancient Altar took the stage. Two of the members of this Los Angeles-based band were in an instrumental doom quartet known as Iron Mtn. I’ve known these two gentlemen, Barry Kavener (guitar/vocals) and Scott Carlson (bass/vocals), for quite some time and I was excited to see their set as both have stepped up for vocal duties. The line-up is rounded out with Jesse Boldt on guitar and Etay Levy on drums. This is a formidable crew of doom/sludge and there was a good-sized crowd a little after the 10 o’ clock hour.  Ancient Altar were well-received and I’m proud of these guys.

Wolvhammer, a sludgy doom quartet from parts of Minneapolis and Chicago, played to a packed house. A friend reminded me that they were part of the Profound Lore/Scion A/V free show in 2012. This Mid-west band’s guitarist (also background vocals), Jeff Wilson, had an interesting flavor of riffs in the chords that he played.  As a guitarist myself, I think adding more than just playing power chords makes the music much more interesting.  There’s substance. The rhythm section was solid and consists of Joe Noel (bass/background vocals) and Heath Rave (drums). Adam Clemans’ doom wails was consistent throughout the set, and only in the title track of their latest record, “Clawing Into Black Sun,” he sings/mutters in the initial part of the song. It was a great set and the sound was dead on. 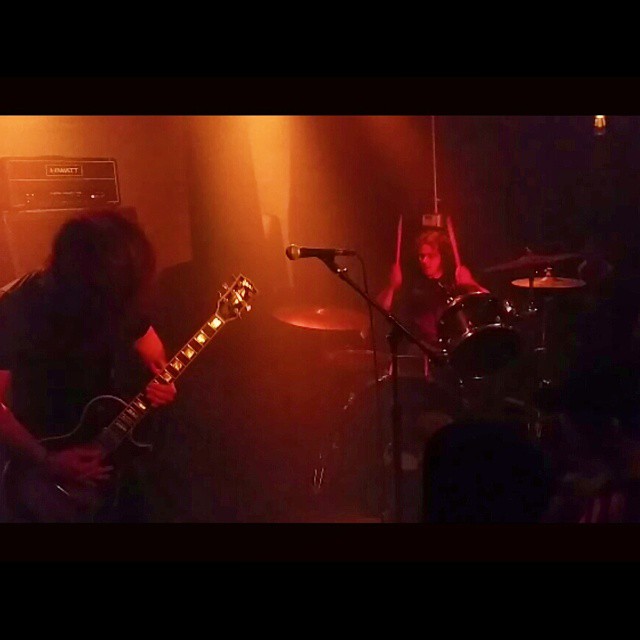 The headliners Black Cobra got their turn next. I’ve seen this duo more than a few times.  I try not to miss their gigs in LA and they are always good at what they do. It was a good crowd for an after-midnight set on a Thursday night. There was a cluster of fans close to the stage as Black Cobra played just short of an hour. They played a good mix of the four albums they’ve released through the Southern Lord label. It was great to see more songs from their latest release ‘Invernal’ (2011) as compared to their previous LA shows. Just watching Rafa fiercely attack his drum-kit like a crazed octopus and Jason’s arms matching his cohort’s prowess always sets me in awe of their agility and stamina.

This Los Angeles date was the third to last of this particular tour until they go home to rest and work on their next release. They sold a good amount of their hoodies and shirts, I believe, as the pile of merch dwindled over the course of the night – a great sign of a successful tour. If you have not seen Black Cobra, do yourself a favor and check them out when they hit the road again next year, hopefully!

I spoke to Jason briefly before the show and he mentioned that they are 8 – 9 songs into their next release. This is great news because the Black Cobra will be prepared when they go into the studio.

Here’s a Black Cobra clip from the show, by Matt Nielson: