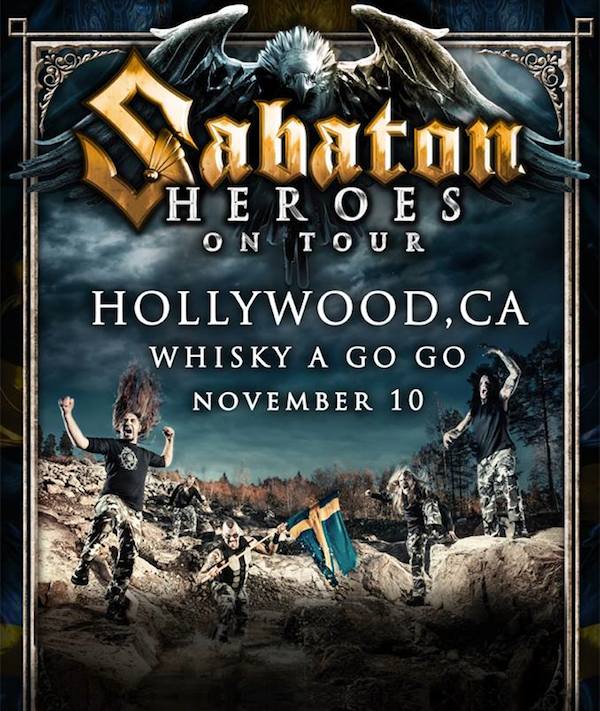 November 10th 2014, Whisky-A-Go-Go, West Hollywood CA: Widely considered as one of the most hard-working live metal bands today, Sweden’s power metal wrecking ball Sabaton, have been performing all over the states as of late. From their solid performance at ‘Maidenfest’ last September, and the amazing reaction they received playing with Iced Earth this May, it’s no surprise that their recent touring here has been nothing short of remarkable. Fresh off their a North American tour with Amon Amarth and Skeletonwitch, Sabaton had some headlining dates scattered throughout, including their very last date of the tour at the Whisky in West Hollywood. Despite Judas Priest playing literally 10 miles from the Whisky, I knew plenty would still be attending and, were in store for a joyful evening.

The night would start at 8:30, with one of two local bands opening the bill. Last Great Nation played to a decent crowd already inside the Whisky. With Sabaton catering to a more melodic style of metal, I was curious to see how the rest of the lineup would be perceived. Last Great Nation reminded me instantly of High On Fire, although tighter and not as bass-crazy, all positive qualities in this case. Lone guitarist on stage Dan Yob put the crowd on notice with some tight lead guitar and a vicious heavy tone to go with it.  Using 7 strings for a rock-oriented style can be rather distasteful if not properly used, however the tones and textures underneath it were catchy, fairly powerful and headbangable. The interesting one on stage was their bassist/vocalist and lead man Greg Weiss, whose vocal style fit slightly on the thrashy and grungy side. The crowd stood still for the most part but applauded loudly through every song they played. One aspect I really enjoyed was their unique use of samples through their music. The intros fit well into the music and gave the music character.  Weiss told the crowd, “Are you ready for Sabaton?!”, to which people were kind enough to not boo or make remarks.  Not everyone has to know who the bands they’re playing with are, and at first, I thought it was maybe a sign of nerves, but finishing their set, he said the same “Sabatron” again. Aside from that blunder, Last Great Nation’s style of groovy rock/metal was a pleasant warmup for the rest of the evening.

9:15 happened sooner than later, with the crowd slowly filling up the Whisky, as San Luis Obispo’s Dagherus was up. Unlike Last Great Nation, who had some elements of thrash within their music, Dagherus was a fully straight-up thrash act, which had the crowd pitting throughout. I admit to being rather picky with thrash metal, as I usually prefer the more technical side of it, such as Megadeth and Kreator. But to my surprise, Dagherus played the style of thrash I enjoy. The musicianship of guitarist/vocalist Andres Arevalo and guitarist Ted Garabedian was a delight to watch, trading off killer riffs and blistering lead guitar work. “The Human Condition” was the best track of their set for me, complimenting their sound with vicious guitar work found throughout. One gripping flaw though, were the vocals of Arevalo. While belting out some decent shouts, the majority of his vocals were in this ridiculously high range. Marginally, his voice would crack, and just made me wonder if sticking to a more mid-range style would be beneficial. High-pitched vocals are absolutely fine with me, as long as they fit the music, and sound good. They were none of these things, but the music itself was still enjoyable. The crowd was more than into them, and I definitely liked their fast and complex style of thrash metal. Despite the vocal approach, I enjoyed Dagherus’ music and look forward to seeing their future grow.

Serving as main support for Sabaton, Los Angeles’ melodic death/power metal act Sirion took to the stage. Seeing them in Anaheim earlier this year with Rattlehead, I was impressed with their style of intergalactic technical metal music. And with this show having far greater attendance and Sirion getting to play a proper main support set, I was proud to see them take great advantage of this opportunity. And they did not disappoint. Their musicianship is top notch, even in the crazy pile of death metal bands we have these days. Vocalist Biko Wright growled loudly and proudly to everyone in attendance, demanding crowd movement on this Monday evening. As each song went by, the crowd enjoyed them more, to where “Earthmind” played to the first large pit of the evening. Guitarist Dan Serper, while performing a hilarious crab walk on stage, played his axe instrument beautifully, with glistening tones that provided a universal space experience. The music is quite flashy, but the fact that it does fit their style makes the experience unique, fun and meaningful.  Keyboardist Rob Rosen’s sound was spot on, and he pulled out the keytar, joining Serper and other guitarist Alon Mei-Tal with trade off solos together. Their two newer songs, “Blackened Skies” and “As the Universe Unfolds”, which they’ve made a music videos of, continue to show Sirion’s expansion into making even greater quality “Space Death Metal”. Sirion received a huge crowd response, and this was easily the best show I’ve seen them from them. Hopefully they’ll release their first album shortly, and will continue to expand the minds of various metalheads all around.

And at 10:55 PM, the shouts and screams of “Sabaton!!!” rolled all throughout the Whisky-A-Go-Go. At this point the floor was essentially full, with the upstairs greatly packed to get a more vertical view of the show. Playing into the PA system for their intro was Europe’s classic “The Final Countdown”, which everyone was singing along loudly. Drummer Hannes Van Dahl came out first to start off “Ghost Division” to possibly the loudest crowd I’ve heard this year. The rest of Sabaton came out and played a profound 90-minute set of dazzling live Swedish power metal, with the crowd moshing, singing every lyric, and jumping all at the same time. All of the past Sabaton shows proved to me how incredibly passionate this audience was for them and it was proved once again this evening. With Sabaton since the beginning, bassist Pär Sundström smiled and got into the crowd’s faces each and every chance he was able to. Leader and vocalist Joakim Brodén was stunned and astonished at the huge turnout despite Priest playing minutes away. Each and every time they play in CA, his happiness and joy of the metal support from the crowd is absolutely evident on stage. From bumping fists with anyone in the front row, to his signature flashy movements on stage, I admire Joakim for putting on a show. His singing is far better live than on album for me, with his singing slightly in a lower register on album. Before “The Carolean’s Prayer”, Joakim was giving Swedish language lessons, which the crowd knew a great deal of, surprisingly.  Sabaton’s energy on stage is wholesome, full of bright memories and feelings, and simply pure joy. Guitarists Thobbe Englund and Chris Rörland always made sure to keep that visible, constantly playing around with the other members while also keeping their outstanding guitar ability on display.  As always, Sabaton’s riffs and choruses will stay in your head after only a few listens.  With a headlining set, Sabaton busted out some oldies, as Primo Victoria’s “Panzer Battalion” received one of the best ovations of the night. Attention every band out there, don’t ignore your older material.  It’s usually the “passionate and rawer” material, but nevertheless, it’s what made you, you. Other awesome highlights included the choice of hearing “Gott Mit Uns” in either English or in Swedish, in which of course, you guessed it, the Swedish version was played and got an enormous response. Because this was the last date of their tour, Joakim asked anyone if they would bring him a beer, they can pick a select song to play. This was done in moments, and the happy fan chose the album Coat of Arms out of that and Carolus Rex, while picking “White Death” as his choice instead of “Screaming Eagles”, to which the crowd was roaring in delight. In Sabaton tradition, “Metal Crüe” ended their 16-song set, and Joakim pulled up a young metalhead from the crowd to party with the band onstage. Joakim has been kind to have done this at the two previous shows I saw them at, and that truly will make a positive and everlasting memory for the young kids onstage with them. You don’t get that kind of hospitality with most other music genres, so major props. Sadly, the show came to an end, with the Sabaton fans just as loud from the beginning, to the very end of the set. Touring back here in April with Nightwish as headliners will only raise their stock even further.

I guess the only flaw of this show is that I really can’t see them support anymor. This was such a wonderful performance, that it really won’t be the same when they’re a support act. The difference between them in a supporting role performances and as headliners is astronomical. I dare say this was one of the best performances of the year. And absolute respect to this unbelievable crowd in attendance. By far the best crowd of the year so far, moving the Morbid Angel/Dying Fetus pitters at this year’s Summer Slaughter to second place. I truly wish every single metal show was this crowded, passionate and involved as this audience made it. Sabayon shoed themselves to be one of the best live acts you can catch right now. Do not miss your opportunity, especially when they’re headlining.