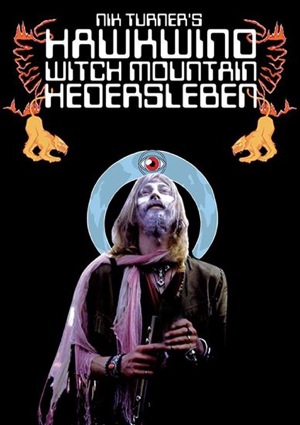 August 27th 2014, The Viper Room, West Hollywood CA: Primarily known for his stints with pionerering English space rock legends Hawkwind in the late 60s, early 70s and early 80s, Nik Turner carried on delivering the Hawkwind material from his time in the band through live performances all over the world, lending the touch of theatricality and freakish psychedelia that would accompany the typical Hawkwind shows of yesteryear. Still to this day, even at his age, Turner is an actively touring musician and enlists services of carefully chosen band members to tour and play shows with special emphasis on Hawkwind’s 1973  ‘Space Ritual’ album. He has embarked on a brand new North American tour with support from Witch Mountain and his backing band Hedersleben as the opening act, and after playing the tour’s kickoff show in Oakland CA on his 74th birthday, he arrived in West Hollywood for a gig at the Viper Room. Little did any of the unsuspecting members of the audience know or anticipate just how mind-bending of an experience this show was going to turn out to be.

Doors opened at 8, and at 8:45 the show began with progressive/experimental ‘Krautrock’ band Hedersleben taking the stage for an intriguing 35-minute set filled to the brim with trippy rock music heavy on synth, including usage of violins and mostly instrumental but boasting of an occasional dual layer of female vocals through the efforts of the two lovely ladies in the band. The violinist was wearing a dress that was aesthetically graceful but very stimulating, in every sense of the word. Musically they were right up the alley for all Hawkwind fans in attendance, and the talents of these musicians, which would be in greater focus later on in the evening as Nik Turner’s backing band, were clearly demonstrated through their original tunes.

Next up was Witch Mountain, hailing from the unending reservoir of great heavy music that is the city of Portland, Oregon. The group is at a crossroads, ready to release their new album ‘Mobile Of Angels’ via Profound Lore Records on September 30th but also bracing for the imminent departure of singer Uta Plotkin immediately after. And for that reason, the fans present here must feel fortunate to bear witness to what was not only the band’s last LA show with Plotkin on vocals, but also the first and last time the Mobile Of Angels material would be played the way it was intended to be. They played two songs from the album including the single ‘Psycho Animundi’, and the rest of the set comprised two older tunes, featuring the amazing ‘Beekeeper’ as its final item, by popular demand from a persistent bunch of fans in the front row. The heads in the crowd were swaying all along the set and Witch Mountain’s righteous doom greatly satiated this audience. Plotkin delivered a stunning performance on vocals and made it all the more evident that she’ll be hugely missed. If you’re even remotely a fan of doom, you owe it to yourself to not miss Witch Mountain on this tour. 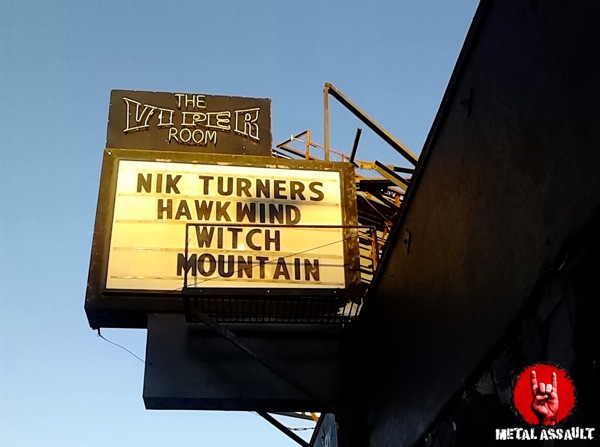 And lastly, it was the turn of Nik Turner’s Hawkwind to cast its spell on the Viper Room audience with a delightfully long set of well-chosen and brilliantly ordered tunes, augmented significantly by the lighting patterns, space noises and the choreographic movements of the two females on stage. The 74-year old Nik Turner was unbelievably great on vocals, flute and saxophone throughout the set, and came across as a true inspiration for musicians in the audience who must have thought they’d be highly blessed to be still playing on stage when they get to the age of 74. Hawkwind’s influence on psychedelic/progressive rock and metal is clearly noticeable when one objectively looks at the genre’s evolution, and this show was a thoroughly enjoyable representation of that fact.

Turner’s spine-chilling hypnotic spoken-word part in ‘Sonic Attack’ followed by the frantic and heavy ‘Master Of The Universe’ formed the highlight of the set in my opinion, mind-blowing to the extreme and inducing a big reaction from the crowd. Turner then invited Jello Biafra onto the stage to lend guest vocals on a few songs towards the end of the set, which closed aptly with a cover of Robert Calvart’s ‘Ejection’, as the performance reached an epic crescendo, both sonically and visually.

As someone who previously never had a chance to see any version of Hawkwind, I had heard plenty of great things about Nik Turner’s show, and to be able to not just witness it first hand here but to conclude that it was as incredible as it had been painted through the words of others, was a privilege.