June 26th 2014, King King, Hollywood CA: Even though the city of Los Angeles has always been, and perhaps will always be known in the rock and metal community for its affiliation with 80s/glam/classic metal, there is no denying that a scene for progressive heavy music has existed over the past two-three decades and continues to inspire young musicians to take up the genre as their choice of musical style. Groups such as Tool, Spock’s Beard, Cynic and Intronaut have successfully embodied LA’s progressive outlook in their music, and influenced by them there’s a whole new generation of prog bands developing locally. As an apt demonstration of this, the folks at LA Unsigned organized an event called ‘Progressive Underground’ at King King in central Hollywood last night, featuring Socionic, Elixir On Mute, After and All Hail The Crimson King.

As I stepped into King King, I remembered that this was only my second time at this venue, as fond memories from my previous visit, which was for a righteously fantastic show put on by Holy Grail and The Binges, came to mind straightaway and it instilled a degree of anticipation that this was going to be another good outing here. 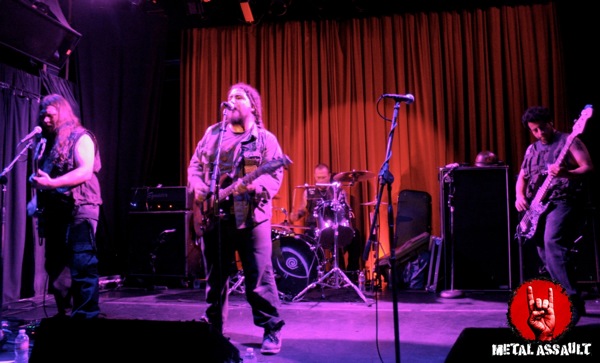 At around 8:30, All Hail The Crimson King, who had driven all the way from the Antelope Valley to play this show, started proceedings with their brand of self-described ‘post-apocalyptic’ metal and entertained the audience with a a goofy, fun-filled exhibition of metal interwoven with nerdy references. Their musicianship came across as solid and their on-stage energy was good, as they played an enjoyable set and ended it strongly with ‘Holy Shit Zombies!’ which was probably the best song they played, as they even managed to garner some crowd participation with it. But one thing that confused me was, their frontman kept announcing the band’s name as ‘attack’. A friend of mine in the audience speculated after their set that may be ‘attack’ would be spelled ‘AHTCK’ in the post-apocalyptic world. Strangely enough, his hypothesis made sense, but regardless, I would rather they say their full name. Other than that, a very good performance. 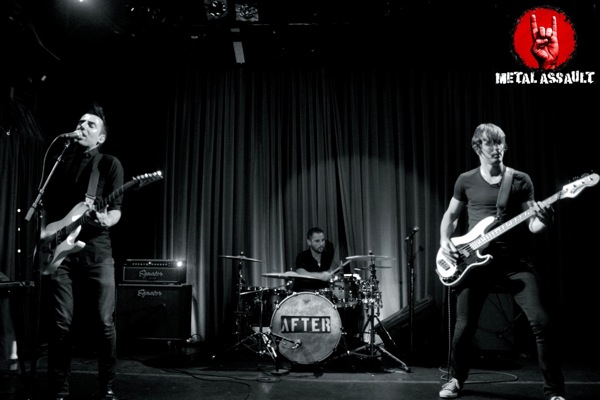 Next up was a three-piece band called After, who brought forth a much darker and more progressive sound, transforming the vibe inside the venue as a consequence. The North Hollywood-based trio, led by Jose Freitas on guitar, vocals and keys, and featuring bassist Matt Dennis and drummer Mike Robbins, presented a set of compellingly well-written tunes that certainly showcased a dynamic nature in the way they’ve been composed, and even more so with the manner in which they were performed live, enhanced by all three members displaying exemplary energy levels. Their set also included a cover of The Doors’ ‘Riders On The Storm’, which came as totally unexpected, as I would have never imagined a prog rock band choosing to cover a Doors tune. But, After’s interpretation of the song was extremely enjoyable, and upon seeing how well it worked in their setup, it made me realize that the influence of The Doors is omnipresent, even in musical genres far removed from theirs. 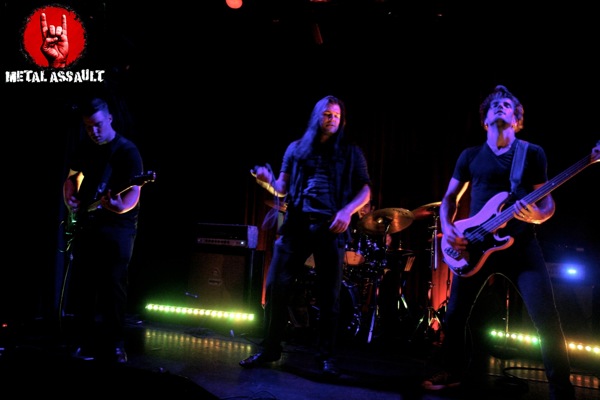 Following that great After set, it was the turn of Socionic, billed as the headliners of this event and once again featuring the talents of Matt Dennis who pulled double duty on bass at this show with Socionic and After. Compared to the other three bands in this lineup, Socionic had more of a visual element to their show through the usage of horizontal light strips lined up either side of the drumkit (as seen in the photo above), and the lighting patterns went in sync with the music being played on stage, enhancing its impact to an extent. When you think of the term progressive metal, you think of intricate guitar work, creative rhythm fills and odd time-signatures, but one aspect that’s definitely underrated is the vocal delivery, as proven by great frontmen like Russell Allen, Ray Alder and Jonas Renske without whom their respective bands Symphony X, Fates Warning and Katatonia wouldn’t be quite the same. For Socionic, singer Michael Meinhart put on an excellent performance, utilizing his great voice and stage presence to the fullest extent, playing an indispensable role in the band’s musical expression and showing that having a non-instrument-playing singer can make a huge difference. But of course, he was well supported by his three band mates and as a group Socionic brought forth a thought-provoking display of dark musical artistry which combined the heavy and the tender elements in equal measure. 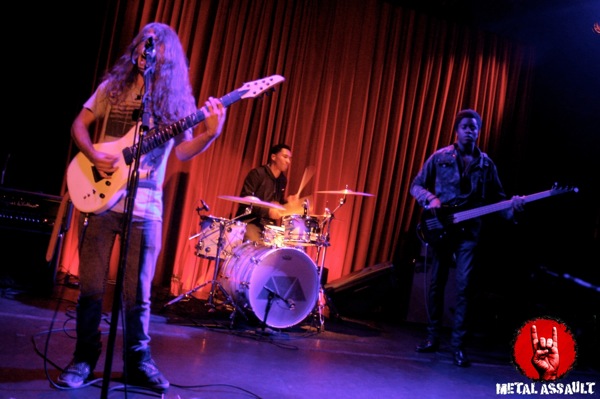 And last but by no means the least, Elixir On Mute took the stage for a typically mind-boggling onslaught of riffs, solos and insane interplay between three extremely talented musicians. They participated in LA Unsigned’s previous event at the Down N Out exactly a month ago, a largely different lineup with more of a hard rock theme to it, and them seamlessly blending into both events of such varying kinds simply showcased the eclectic nature of their music which combines rock, metal, funk, jazz, prog and probably several other things which are not even evident on its surface. Elixir On Mute vindicated those in the audience who elected to watch their set and stay till the very end, as some of the first-timers were seen with their jaws dropped. Their set was by all means an apt way to end the evening.

Venue-wise, King King provided a welcoming environment for bands and the audience alike with a good stage and a laid back vibe, and if anything, they could do with a more evenly balanced sound mix, a necessity for rock/metal shows. Overall, Progressive Underground, aside from its undeniably awesome name, showcased some great prog rock/metal talent. As a huge admirer of the genre, it’s heartening for me to see and discover that bands like Socionic, Elixir On Mute, After and All Hail The Crimson King are doing their bit to represent the LA prog scene, and I’d love nothing more than to see more of these Progressive Underground shows with other great LA bands in the future.

Check out more photos of Elixir On Mute, Socionic, After and All Hail The Crimson King below, or view them here if you’re on a non-Flash device: