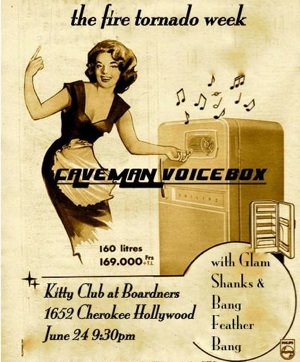 June 24th 2014, Boardner’s, Hollywood CA: Continuing on with their Tuesday rock nights which they do on a regular basis, the Kitty Club at Boardner’s put on a show last night featuring Los Angeles rock groups Caveman Voicebox, Bang Feather Bang and Glam Skanks. A cozy, intimate little place in the heart of Hollywood, Boardner’s is a venue I’ve visited a few times in the recent past. Its friendly and welcoming vibe to go with the decently sized stage and suitable sound setup makes it a cool hangout spot as well as a good live music venue that’s certainly doing its bit to retain the city’s longstanding rock culture. Having previously seen and enjoyed all three of the bands on last night’s lineup, this was a show I already expected great things from.

Hard rock trio Caveman Voicebox were the first to take the stage at 10 PM. The band thrives on a simple, no-bullshit approach towards creating and performing rock music, and the chemistry between vocalist/bassist Graham and guitarist Karl has clearly been more evident ever since the band stripped down from a four-piece setup to become a power trio. With new drummer Chris, they put on a solid showing here. Drummers that are talented and committed in equal measure seem to be a rare commodity in the local music scene and is the one thing that holds back bands from being as active as they want to be. CMVB seem to have found an excellent drummer, and hopefully for their sake, he’s in for the long run. They played tunes off of their two EPs ‘Strippers, Mullets & Beer’ and ‘Facial Hair & Harmonies’ along with a new unreleased tune called ‘Reidel Panic’. Out of the seven songs they played in total, ‘Save Me’ was the slowest of the lot and easily my favorite, which might be a reflection of my personal musical tastes which has been heading in the direction of ‘the slower the better’ of late. All in all, good start to the show by CMVB. 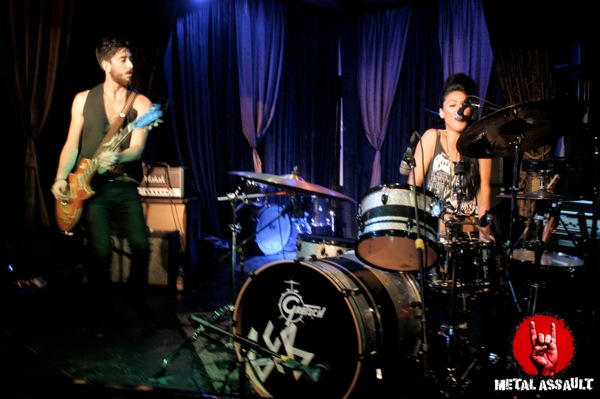 Rock duo Bang Feather Bang played next and thoroughly impressed the crowd with their performance. When I saw them for the first time at Loaded recently (a gig that CMVB also played), their music came across as bluesy and soulful with a Southern rock vibe to it, but last night’s set was definitely more ‘rocking’ in comparison, and it’s clear that BFB have strengthened their music as well as its live presentation. What they pursue with their music is pure vintage rock, but the combination of the female vocals, the drums and the guitar parts lends itself to its own unique twist, and it wasn’t a surprise to hear the singer/drummer mention that they played South By South West (SXSW) earlier this year, because their overall musical personality and presence totally befits the SXSW environment. Bang Feather Bang is undoubtedly an interesting band to witness live. 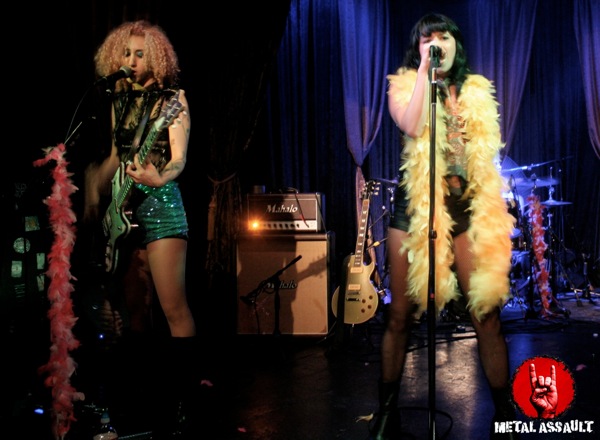 And lastly, the all-female rock quartet Glam Skanks lit up the stage with an expectedly high-energy set which comprised more original tunes as compared to the last time I saw them, which wasn’t a bad thing at all as proven by songs like ‘The Radio Blues’, ‘Teenage Drag Queen’ and ‘Rock N Roll Skank’ which turned heads amongst people in the audience and garnered a good response from them. The set did have its dose of covers as well, including Queen’s ‘Stone Cold Crazy’ and Suzi Quatro’s ‘Roxy Roller’, both suiting the Glam Skanks perfectly, and done justice to by the manner in which they were performed. These girls definitely have a good thing going, and are providing a great throwback to a style of classic hard rock that was once popular, specially in this city. The Glam Skanks play shows on a very regular basis (in fact, they’re playing Loaded tonight), and if classic/glam rock is your thing, go check them out.

All in all, great night out at Boardner’s thanks to the promoter, the venue and the three bands. More people need to support and attend these shows, not just for their own entertainment but also to contribute towards the growth and retainment of the rock scene and culture in this town.