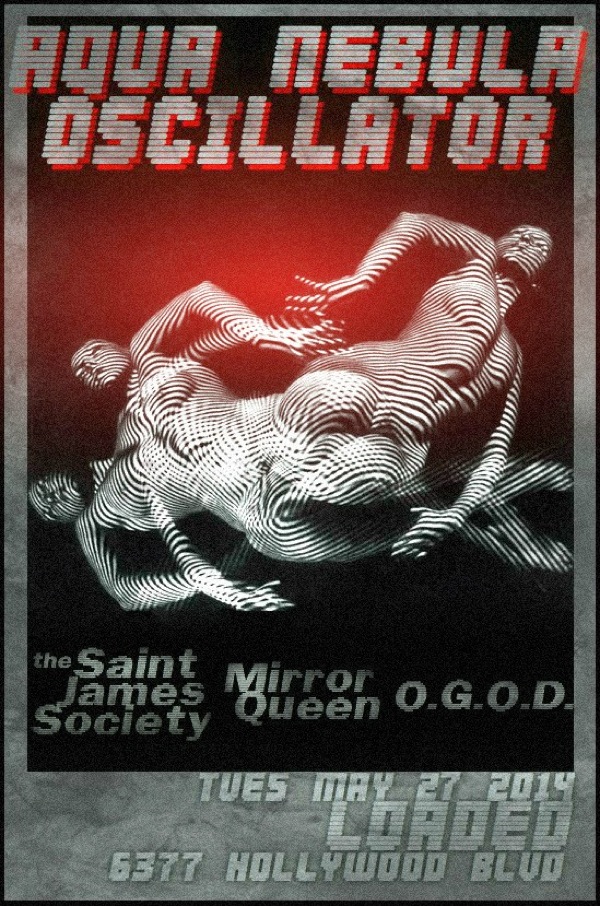 May 27th 2014, Loaded Rock Bar, Hollywood CA: Following their appearance at the recent Scion Rock Fest in Pomona as one of the headline acts, French psych rock quartet Aqua Nebula Oscillator extended their California run to further promote their 2013 release ‘Spiritus Mundi’, and visited the Loaded Rock Bar in Hollywood last night for a headline show of their own, along with fellow Tee Pee Records artists Mirror Queen and The Saint James Society and local opener OGOD. I could watch them for only a small portion of their set at Scion Rock Fest but was highly intrigued by what I witnessed and jumped at the opportunity to see them again so soon in a much smaller and potentially more apt setting.

Pasadena’s OGOD (Over-Gain Optimal Death) started proceedings with a set of fuzz-driven psychedelic rock. The three-piece outfit’s musicianship relied on the echoey vocals of their frontman and the vintage vibes of the Fender Strat he played, to go with a rhythm section that reveled in simplicity and repetition, giving the music a hypnotic, trance-like feel. While the trio repeated certain musical patterns for several minutes at a stretch, the variation in tempo from one tune to the next was sufficient to keep the set interesting, starting with slow jams, building up to end on an ultra-fast crescendo. OGOD turned out to be a well-chosen local opener as their set was engaging, and in tune with the nature of the evening.

Next up was the first Tee Pee Records band of the lineup, The Saint James Society. A four-piece group that started out in Austin TX and moved to Los Angeles, they played a brand of desert rock that quite aptly captures the two geographical and musical landscapes they represent, combining a classic Los Angeles Doors-inspired sound with the artistic, folky classic rock tendencies that almost automatically get engraved into any band starting out in Austin. Guitarist Marc Sallis’ single pickup Fender Squier emanated a steely tone but frontman Brandon Burkart’s bass was as much of a lead instrument, and put together with his vocal delivery as well as Elza Burkart’s female backing vocals, The Saint James Society brought forth a style of rock that was high in melody but the large amount of fuzz lent a good balance to it. The drummer had to replace his kick drumhead in the middle of the set but Brandon Burkart played a bass solo to fill the silence, and overall the band played an impressive set.

In comparison to the two bands that played before them, New York City’s Mirror Queen presented a richer, fuller and more riff-driven rock sound that was instantly appealing even for the first-time listener. Frontman Kenny Kreisor and guitarist Phil Ortanez combined for a twin Gibson SG attack and to me, their harmonies were strongly reminiscent of Paul Di’Anno-era Iron Maiden, which in the end made absolutely perfect sense because they closed out their set with a solid cover of ‘Phantom Of The Opera’. Mirror Queen’s music makes for a compelling blend of classic rock and classic metal, and following New Jersey boogie thrash outfit Hammer Fight’s stellar performance in downtown LA the night before, Mirror Queen becomes the latest East Coast band to be added to my radar and comes as highly recommended for any fans of old-school rock and metal.

And finally, at 15 minutes past midnight, all was in readiness for Aqua Nebula Oscillator to begin their ritual. Their set list for this show was similar albeit smaller than what they did at Scion Rock Fest, but its impact was amplified tenfold. Their music isn’t exactly the kind that would appeal to someone who’s ‘loaded at Loaded’ and would heighten the senses a lot more upon consumption of certain other substances, but the size of the stage and the room itself to go with its sound quality proved to be a great setting for Aqua Nebula Oscillator’s 45-minute psych avalanche.

Frontman David Sphaeros excelled at guitar and vocals but also employed the usage of a variety of other instruments and paraphernalia to enhance the psychedelic aspects of the band’s music with able support from Andreas Carrere on the synth, organ and a number of different instruments of his own, and the thunderous loud rhythm section of bassist Alexis Raphaeloff and drummer Adrian Bang. But perhaps the highlight of the set was Sphaeros’ sitar jam. I missed this part of the show at Scion Rock Fest, and prior to witnessing it here, never did I imagine that a sitar-based sound would make me head-bang. Shpaeros certainly did that with his exploits on the instrument that looked more like a guitar but sounded exactly like a sitar. Aside from that, the band infused plenty of other folky sounds and layers into the mix and played a 45-minute set that was nothing short of hallucinogenic. Based on this performance alone, it’s safe to say that Aqua Nebula Oscillator’s musicianship is the truest form of psychedelia one could ever witness, and not only for rock fans but for connoisseurs of all things psychedelic, they’re an absolutely unmissable live act.