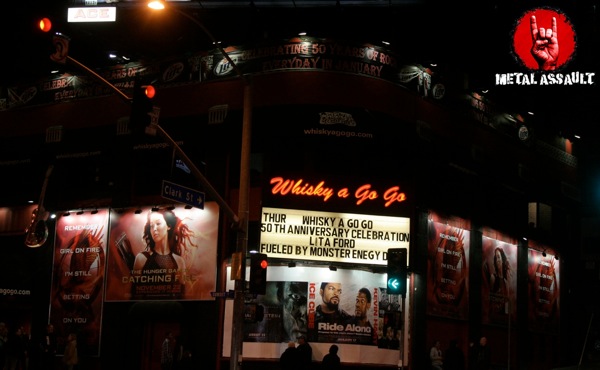 January 9th 2014, The Whisky, West Hollywood CA: Amidst the venue’s ongoing month-long 50th anniversary celebration, rock n’ roll queen Lita Ford took the stage at West Hollywood’s historic Whisky-A-Go-Go last night. Former member of the shortlived all-female hard rock band The Runaways in the late 70s, Lita Ford has enjoyed a successful solo career for the past three decades and over the years she’s had a lot to do with the Los Angeles rock music scene, so it was only appropriate for her to be an integral part of the 50th anniversary festivities of one of the city’s oldest rock clubs. Along with the prospect of performing choice selections from her discography, Lita Ford promised to bring along some very special guests for this show. The hefty advance ticket sales and the large number of people lined up to buy day-of-show tickets early in the evening subsequently lead to the completely packed venue later on, and the excitement surrounding this show was palpable.

At 11 PM, she appeared on stage to rapturous applause from the audience, soon followed by her band mates, and to celebrate the recent release of the live album ‘The Bitch Is Back .. Live’, they kicked off the set with an Elton John tune of the same name. Then came an assortment of Lita’s solo material consisting of older hits like ‘Hungry’, ‘Gotta Let Go’, ‘Out For Blood’, ‘Back To The Cave’ and ‘Can’t Catch Me’, along with songs like ‘Relentless’ off of the latest studio album ‘Living Like A Runaway’, following which the title song of the album was played, and they were joined by Lita’s former Runaways band mate Cherie Currie, who proved with her recent performances at the Gibson Amphitheater and Viper Room that she still very much has what it takes to deliver great vocals live, and last night was no different in that regard as she effortlessly stamped her presence on that stage by singing ‘Living Like A Runaway’ with Lita as a duet, and then, as expected, setting this place alight with ‘Cherry Bomb’ for which Slash also joined the band on stage.

As the trio of Lita, Cherie and Slash rocked Cherry Bomb on stage, the audience was having an absolute blast and it was certainly one of the highlights of the set. Cherie departed the stage after this song but Slash stayed to jam ‘Black Leather’ with Lita and her band. This song appeared on The Runaways’ fourth and final studio album ‘And Now … The Runaways’ but originally written by Steve Jones and Paul Cook for the Sex Pistols, and was covered by Guns N’ Roses on their 1993 all-covers album ‘The Spaghetti Incident?’ One wouldn’t have expected or imagined Slash and Lita Ford to be performing that song live on a stage together in the year 2014, so this was a very pleasant bonus for the audience, and as always, Slash laid down some quintessentially sweet guitar work on the two songs he participated in at this show. His former Guns N’ Roses band mate Teddy ‘Zig Zag’ Andreadis also joined Lita Ford on stage, playing keyboards on a few of the songs, wherever required. 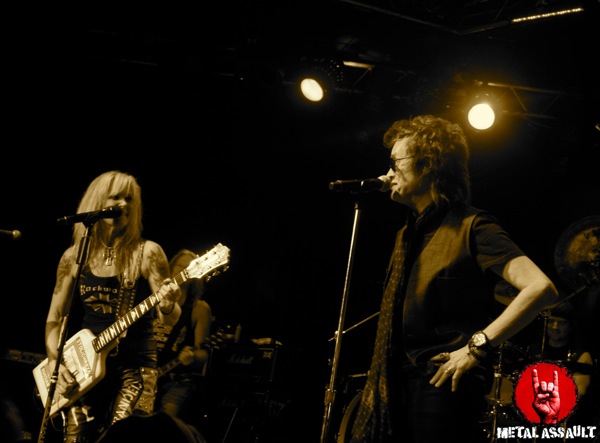 But the show was definitely stolen by Glenn Hughes, the legendary rock n’ roll singer known and revered for his stints in Deep Purple and Black Sabbath. He jammed with Lita’s band for two Deep Purple covers ‘Mistreated’ and ‘Burn’, and stayed on for Lita’s own ‘Close My Eyes Forever’. He truly stunned this audience with his jaw-droppingly amazing vocal delivery, and words cannot express just how wonderful this man’s performance was. It was just one of those things which you had to be in attendance to fully comprehend. When he finished laying down a spellbinding rendition of ‘Mistreated’, Lita herself looked as if she was completely overwhelmed, so much so that she appeared to be fighting tears. That’s what Glenn Hughes does to you. 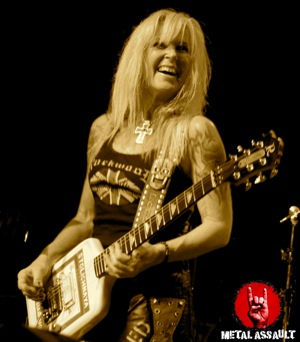 Hughes departed, and Lita ended the show with ‘Kiss Me Deadly’, during which autographed balloons were dropped from the balcony as souvenirs for the audience. At the end of the song she thanked them for their attendance, and received a generous round of applause in return. Based on every aspect of this performance, it was clear to anyone in the crowd that this show meant a lot to Lita Ford. She certainly left no stone unturned in making it a memorable show for the paying fans, and there’s no doubt she succeeded in her endeavor. Her guitar play at this show was as solid as it has ever been, and she brought out all her beloved instruments including the Stoli Vodka guitar, the black Warlock and the double-neck. For the first couple of songs in the set she wore a jacket which was embroidered with the Whisky’s name and was her tribute to the venue. Besides giving her best to play the songs in the set, she also shared stories wherever appropriate, like the Lemmy story she told before proceeding on to play ‘Can’t Catch Me’, among others. But perhaps the most pleasantly surprising positive aspect of the show was Lita Ford’s performance on vocals. Even at this age, she holds her own and does justice to all these songs, many of which were written more than three decades ago, and this quality of her musicianship was highlighted even further whenever she put down the guitar and performed as a sole vocalist.

Overall, this show, in all honesty, lived up to expectations and treated this audience with something they would remember for a long time. Lita Ford is undoubtedly still the rock n’ roll queen, and whenever you get a chance to see her show in your town, do not miss it.

Check out more photos from the show in the gallery below: