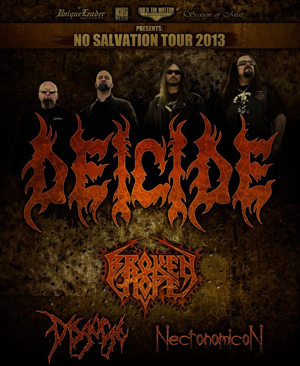 October 20th 2013, Whisky-A-Go-Go, West Hollywood CA: Florida death metal veterans Deicide will be releasing their eleventh studio album ‘In The Minds Of Evil’ on November 25th via Century Media Records, and to provide a build-up to this release, they set out on the ‘No Salvation’ North American tour this month with a solid extreme metal support package consisting of Broken Hope from Chicago, Disgorge from San Diego and Necronomicon from Montreal, Canada. While Deicide’s previous studio album ‘To Hell With God’ was a perfectly brutal piece of heavy music, I was largely underwhelmed by their lackluster performance at the Key Club in early 2011, but I decided to check them out last night at the Whisky with a completely open mind, and having never seen any of the support bands before was an added incentive as well. I arrived at the venue at around 8 PM, and even at this point of the show, the place looked as packed as I had ever seen it. Death metal was in the air.

There were as many as five local openers added on this already long lineup, and usually I do watch and review all bands as you might have seen in most of my reviews of past Whisky shows, but due to prior commitments I couldn’t do so this time. Credit goes to all five of these bands for playing the show in an attempt to warm up the crowd for the touring acts to follow, and for selling advance tickets, which was a huge factor in the massive turnout at the show.

Slated to play at 8:20, Necronomicon unfortunately were a no-show. Word amongst some people was that the band got stuck somewhere on the road and couldn’t make it. So there was a bit of lull while the next band Disgorge set up their gear and waited for their scheduled start time. But around 9 o’ clock, as soon as this band hit the stage, chaos ensued in the general admission pit, and for the band as well as for this crowd, it was all-systems-go. The San Diego-based deathgrind band started out in 1992, split up in 2006, and made a return in 2011. This was my first impression of them as a live band, and it certainly wasn’t a bad one because they played on an immensely enjoyable set for this extreme metal-hungry audience. They hail from San Diego which instantly reminds me of bands like Cattle Decapitation and Pathology, and I guess there must be something in San Diego’s tap water that gives rise to these great deathgrind bands. I’m not a huge fan of the sub-genre but bands playing this sub-genre bring unrivaled energy and intensity onto a stage, as was proven by Disgorge last night. I couldn’t help but think about how perfectly their name matches their sound. By all means, Disgorge turned out to be a fitting opening act for Deicide and Broken Hope.

Broken Hope, another band that was inactive for a few years and reformed recently, took the stage next. I have spoken to guitarist Jeremy Wagner a couple of times over the past year for interview purposes and I dig the band’s new music, but I really didn’t know what to expect from their live show. Quite simply, they didn’t disappoint. Their brutally slow riffs ferociously churned through this completely packed room and compelled the audience to indulge in activities such as head-banging, air-guitar and moshing. The scene from the balcony, looking down upon the stage and the audience in one glance was quite a sight to behold. Jeremy Wagner and his band mates sounded absolutely fantastic, and quite deservingly are main support to Deicide on this tour. Following last year’s tour with Obituary, Broken Hope have another extremely solid tour under their belts, and at this rate it won’t be long before they reclaim their pre-breakup stature as a highly influential and relevant band in this genre.

Tour Set List:
1. Into the Necrosphere
2. Dilation and Extraction
3. The Docking Dead
4. He Was Raped
5. Swamped in Gore
6. The Dead Half
7. Womb of Horrors
8. Pitbull Grin
9. Gore Hog
10.Hobo Stew
11.The Flesh Mechanic
12.Felching Vampires
13.Incinerated

At the time Broken Hope ended their set, and for most of the evening for that matter, the sheer number of people at the Whisky was incredible. There was hardly any space to move, and I’m pretty sure the place was oversold to accommodate more people than it could hold. Promptly at 11 PM, amidst chants of their name from this highly anticipative crowd, the headline act Deicide took the stage and in all fairness, decimated it. I once again retreated to the balcony to get a better view of this insane crowd, and I was taken aback by the intensity of that mosh pit. People literally everywhere, moving around in large waves and basking in the Deicide-induced avalanche of brutality. The set list was a solid mix of old and new songs, the old ones clearly identified by the volume of the cheers that accompanied frontman Glen Benton’s announcement of their names.

This Deicide was such a sharp contrast to that Key Club 2011 show I mentioned earlier, it was hard for me to even believe that I was seeing the same band. Glen Benton was at his best both on bass and vocals, and aside from blowing out his bass amp in the early part of the set, he was flawlessly awesome (I never thought I’d say that about him). His band mates did their parts to perfection as well, and their combined sound was as hard-hitting as anything this venue had ever witnessed. The over-capacity crowd certainly got their faces melted off and left the show with a smile and a bang-over. I take back what I said about this band in 2011. Deicide do not suck as a live band. Not anymore.

Tour Set List:
1. Homage for Satan
2. Dead by Dawn
3. Once Upon the Cross
4. Scars of the Crucifix
5. When Satan Rules His World
6. Serpents of the Light
7. Save Your
8. Hang in Agony Until You’re Dead
9. Conviction
10.Trifixion
11.Dead but Dreaming
12.They Are the Children of the Underworld
13.Witness of Death
14.Desecration
15.Sacrificial Suicide
16.Lunatic of God’s Creation
17.Oblivious to Evil
18.Kill the Christian