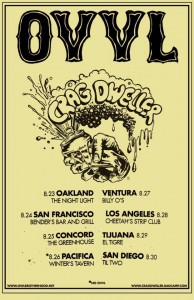 August 25th 2013, The Greenhouse, Concord CA: As the years go by, I seem to find myself in increasingly random places to see shows. On Sunday night I dropped by a small house in Concord, CA to attend a truly special heavy rock concert. Though I’ve been to shows in all sorts of places and settings, this was my first house show, a glimpse of the Bay Area’s underground music community. The show was one stop on an extensive West Coast tour for Oakland’s Ovvl, who brought Portland, OR’s Crag Dweller along for some of the dates. This concert was certainly unlike any I’ve ever seen or attended- it’s also probably the most intimate and personal show I’ve ever been a part of.

The Greenhouse is nestled in the deep recesses of East Bay suburbia, surely the last place one would think to host a metal show right? Well, the gracious residents of The Greenhouse would beg to differ and proved to be lovely hosts for this fun night, ultimately asking only for donations throughout the show. They provided plenty of free food for their guests, and welcomed all who wanted to check out the music, my lame self included. The only rule for admission was BYOB (bring your own beer, or bring your own beef, depending on what your diet was going to consist of). Being a fool who had brought neither, I offered my assistance to anyone around in need of it. This led to me kicking off the night by chopping many a fruit for a delicious dessert salad. Unfortunately, my produce hacking fell right in the middle of Catapult the Dead‘s set. I was able to perfectly hear them from where I was however, and the band’s psychedelic sludge was quite an epic soundtrack for assembling a fruit salad.

When my fruit-chopping duties had ended, I decided to mingle with the fellow attendees of The Greenhouse. I immediately found myself making friends and having fun conversation with those around me; the couple dozen or so people at this show really were an absolute delight to be around. Weed and alcohol were in ample quantity for those who wished to partake, and a backyard with plenty of couches and chairs was there for those looking to kick back and chill out. The living room ended up being the setting for the music, with a small PA system providing vocals while guitars, bass and drums would simply run as is.

Surprisingly enough, the set-up worked very well as I got to see with Concord’s Absolem. The trio played a truly gnarly brand of stoner rock, with the token molten riffs being supplied by guitarist Patrik Martinez. In what may have been one of the more interesting musical phenomena I’ve seen, Martinez’s viscous guitar playing actually provided the rhythmic backbone for the band alongside Marshall Culp’s drums. Bassist Ian Marcos supplied many of the lead lines with his aggressive and busy bass playing, as it was common to hear him play quick melodies high up on the neck while Martinez would pound out ten-ton power chords. Kyuss is the first band that comes to mind when looking for a reference for Absolem, but their music was just a touch on the doomier side of things, and Martinez’s vocals were far more rough-hewn than John Garcia’s. A very cool set, albeit one whose sound was a bit removed from the two touring acts.

Next up was the biggest surprise of the night for me, Crag Dweller. I was expecting some kind of doomy sludge from what the other two acts had been like- I was instead greeted by driving rock and roll and flaming wah-wah guitar solos. In short, Crag Dweller kicked my ass. Rich Vivarelli’s bouncing riffs and out of control solos were nothing but fun to headbang along with, and as he unleashed those wild solos, bassist Cliff Martin gave his hands a hell of a workout, plucking with his right like there was no tomorrow and offering rock-solid lines. Crag Dweller was tight, a rollicking yet damn heavy unit anchored by swinging beats from drummer Travis Clow- they more than deserved the encore that the small gathering demanded upon the end of their planned set. These guys gave one of the coolest sets I’ve seen from a small band all year, in the most personal setting I could have asked for. For the uninitiated, think Motorhead with an injection of ’70s hard rock and the weedier side of Sabbath.

Last up was the band I had come out to see, Oakland/SF’s Ovvl. I was already impressed with the jammy take on Pentagram’s ’70s that the band showed off on their self-titled debut record, so I was eager to see how the music would translate live. Drummer Clint Baechle was the one to watch with Ovvl, punctuating the phrases with massive and avalanche-like fills. Dude legitimately looked like an octopus throughout the set. Guitarists Axell Baechle and K. Baechle were quick to supply plenty of tasty harmonies, with Axell channeling the image of a young Matt Pike with a right hand that moved in a blur, scraggy hair and non-stop headbanging. Bassist Melanie Burkett held the line down while the axe-wielding brothers went into their dual riffing, and filled out the sound ably when the band most needed it. K. and Axell were a more than solid tag-team, engaging in both individual solos and plenty of harmonized riffs- the pair also provided vocals for Ovvl, but they ended up being pretty inaudible under the volume of everything else. Given how dependent the music was on the band’s jamming though, I really didn’t see it as much of a loss at all. In the end, Ovvl’s set really was something else; the well thought out and lyrical jams brought to mind The Allman Brothers Band but with a punk and stoner metal attitude and energy.

All in all, this show really was a blast. The Greenhouse was a more than great setting for this show, a fun and friendly place for a couple hours of old school metal music. Of course, it helped that the bay didn’t let me down with any lame acts and that Portland really stepped up its game by giving us some of coolest riff rock I’ve heard ages via Crag Dweller. A killer way to spend a summer Sunday in the EastBay, and a successful stop for the road warriors on tour. Catch Ovvl and Crag Dweller for their sick music alone- hope and pray that you get as cool an overall experience as I did.