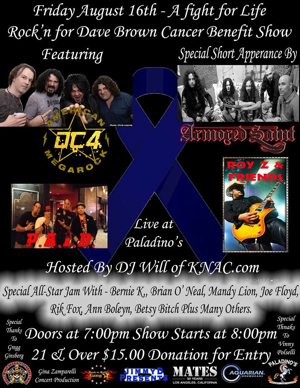 August 16th 2013, Paladino’s, Tarzana CA: Los Angeles might be regarded as a big city but when it comes to its metal community, it’s a small world. Whenever a member of this community is suffering from any kind of ailment or needs any kind of help, action is usually taken immediately and funds are raised via a benefit concert of some sort. Sound Barrier was a Los Angeles-based band that started out in 1980, the first and only all-black heavy metal band of its kind. Sadly, the band disintegrated in the late 80s, but their relationship with their then contemporaries in the LA scene still remain. Which is why, when Sound Barrier drummer Dave Brown was diagnosed with stage 4 colon cancer, singer Bernie K along with friends in Armored Saint, DC4, and a few other bands put together a benefit gig to raise money for Dave last night on August 16th 2013, and the venue chosen for this special gig was Paladino’s.

Quite fittingly, DJ Will was the host for the evening. He did a great job introducing all the bands and throwing in a couple of back stories here and there while doing so. I can’t really think of anyone who could have done it better. The show began at 8:15 as Will introduced the first band to take the stage, Raven’s Cry. Unfortunately they didn’t succeed in starting the evening on a positive note, because their performance only drove people away from the vicinity of the stage. Their music came across as weird, depressing, grungy and didn’t have any sort of strength or conviction to it. The material is just plain weak. But, I’d give them points for effort and I thought their bassist was the best musician in the band. Other than that, Raven’s Cry didn’t prove to be a good opening band for this show.

Thankfully, the next band P.A.I.D. took the stage and provided the warm-up this crowd needed in order to prepare for the acts to follow. They brought some solid hard rock tunes with them and performed with a sense of energy and purpose. Their vocalist delivered a great performance and not only moved around on the stage but jumped off it on a couple of occasions. Tony Lepre’s guitars sounded excellent even though his backing vocals were too low in volume, and the band’s rhythm section held its own pretty well. This band would have been the perfect opening act for this bill, as they did everything the previous band didn’t do.

Armored Saint was slated to hit the stage a little later, but their guitarist Jeff Duncan pulled off double duty as he appeared with his hard rock band DC4. Now, this is a band I hadn’t seen since early 2010 when they opened for HammerFall at the House of Blues in Hollywood. Back then they were just beginning to reform as a group after a few years of absence, but the DC4 I saw last night was a completely different unit, a band that has clearly improved by leaps and bounds, revitalized and re-energized as a legit hard rock group. This set of theirs was fantastic in every sense of the word. They call themselves ‘mega rock’, and they sure did justice to that term last night. Jeff Duncan, the quietest member when performing with Armored Saint, has become quite the frontman and I was pleasantly surprised and amazed not only by the development of his singing voice but also by his interaction with the crowd. On guitar he locked down well with partner-in-crime Rowan Robertson and the duo presented some delightful twin melodies and trade-off solos. Jeff’s brothers Matt and Shawn held down the rhythm section perfectly, with bassist Matt contributing some kickass backing vocals as well. DC4 truly rocked the Paladino’s with this set. Now this is what I call a great hard rock band. 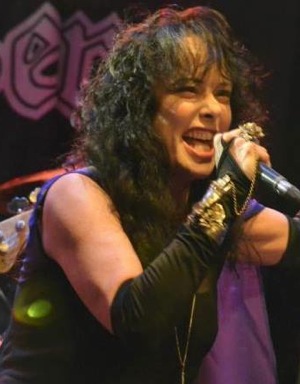 They played six originals in their set that included songs like ‘Electric Ministry’, ‘Explode’, ’25 To Life’ and ‘Candy Caine’, but there was a special treat beckoning, as Ann Boleyn, singer of the 80s LA band Hellion, rushed to take the stage. With DC4 as her backing band, she performed covers of Hellion’s ‘Run For Your Life’ and Black Sabbath’s ‘Heaven And Hell’. I was blown away by how good she sounded and looked even after all these years. Female vocalists in true classic metal bands are a rare species these days, and Ann Boleyn gave us a taste of history, of a time when such singers and bands were in greater abundance. It’s extremely hard for any band to get a typical Paladino’s crowd to rise up and rock out, but DC4 and Ann Boleyn certainly made it happen. 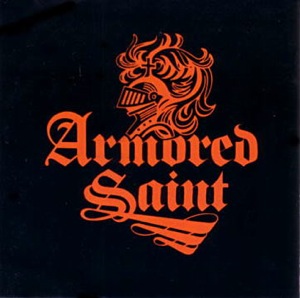 Soon after, Dave Brown himself appeared on stage to say a few words of thanks, after which the moment everyone was waiting for had finally arrived. The ever-amazing Armored Saint took the stage. I was tripping out thinking of the fact that I was getting to see them on such a tiny stage, but as soon as they began, it was time to realize that this wasn’t a dream. They did a four-song set beginning with ‘Can U Deliver’, going into ‘Nervous Man’, then the mother of all classics ‘March Of The Saint’, and ending with the frenzy of ‘Mad House’. Even though the set was much too short for any Armored Saint fan’s satisfaction, but this set was about sheer quality and not quantity. For those who spent the $15 to get into this show merely for Armored Saint, the band’s performance made it well worth the money. Right from the outset, the band sounded absolutely perfect, which was amazing in itself because I don’t think they had even rehearsed for this. The crowd, yours truly included, was loving every moment of it, singing along to every word. Armored Saint is a band that really likes to make their fans wait, but when they do make an appearance, they do not disappoint. Last night was no exception.

But unlike their usual shows, the end of Armored Saint’s set did not bring the evening to an end, as there was much more to come. Roy Z, a name that needs no introduction to metalheads, went up on stage with his guitar as Bernie K took the vocals and in a rare move for someone who’s being benefitted for cancer treatment, Dave Brown took the drumkit. Along with bassist Andre Barry, this group did a three-song set consisting of a cover of Thin Lizzy’s ‘Down On Your Luck’, a Total Eclipse song ‘Fire In The Rain’, and ending with the Sound Barrier classic ‘Rock Without The Roll’ as Sound Barrier guitarist Spacey T joined in on guitar. These three members of Sound Barrier were performing together on a stage after a long time, and they clearly showed how much it meant to them. The evening came to an end as Roy Z played another jam set with a different set of musicians including Mark Boals, Chas West, Mandy Lion, Rik Fox and Betsey Bitch.

Overall, this was a fantastic taste of classic LA metal history, specially for the younger members of the audience who weren’t even born when some of these bands and musicians were in their prime. And of course, it was all for a great cause. With our community showing such strong support, it can only help Dave Brown in winning his battle against cancer.