June 22nd 2013, The Viper Room, West Hollywood CA: Despite having closely followed the band ever since they released their self-titled debut album in 2009, all the way up to their second album release ‘The Right Thing’, I strangely never got the opportunity to see the band live. It was high time I changed that, and last night I sure did, as Owl took the stage at West Hollywood’s Viper Room for a hometown performance. Featuring in their ranks Chris Wyse, bassist for The Cult, along with LA-based multi-faceted guitarist Jason Achilles Mezilis and drummer supreme Dan Dinsmore, I’ve thought of Owl’s music as virtuosic in its own unique way, and it has always intrigued me as something different from what you would describe as ‘normal’ for heavy music. The latest album stands relatively truer to this statement than the first one, and I was about to find out whether Owl’s material, new and old, hold any juice in the live setting.

They hit the stage at around 10.20 PM, starting off with a heavy dosage of songs from the new album. ‘Send’ was a slightly downcast, low-energy beginning to the set, but the band was sounding great right off the bat, and the set really kicked into gear with the next song, the title track off of ‘The Right Thing’. This is when the crowd truly started taking notice and started moving closer to the stage. The ‘garage rock’ feel of this song was suiting this Viper Room environment absolutely perfectly, and it struck the right chord with everyone in attendance which bode well for the rest of the set.

Things slowed back down again with ‘Give’, but this was a song that wholly showcased the musical abilities of each member of this trio, with a strong vocal chorus by Chris and Jason to top it all off. It wasn’t a straight-up rocker by any means, but the delightful guitar work made this slow song just about as enjoyable as anything played last night. This led beautifully into the contrasting next song, a cover of The Kinks’ ‘Destroyer’. That song is so not Owl, but it somehow makes sense on the album and even more so in the live setting as it contributes to the dynamics of the set and keeps things interesting for everyone involved. People in the crowd were certainly rocking out to this one, and it was a fun little four-minute departure from Owl’s original material.

Following that song, Chris brought out the stand-up bass. That’s something I don’t get to witness at heavy rock/metal shows, so it was great to see Chris do a fantastic job at playing it. They did the songs ‘Alive’ and ‘Pusher’ from the first album, out of which the latter was specially great, certainly a lot better and heavier than its studio version. It seemed to be the center-piece of the set as all three members gave it more than their 100 per cent towards performing that song, and its great rendition was a result of their combined energy. At this point, I was thinking that the band had already reached their peak, but sure enough, they took it to another level with the next song ‘Rover’ off of the new album, a goofy, fun-filled Irish number which turned out to be even more fun live.

They ended the set amidst a rousing reception from the crowd with an old song called ‘Violent Center’, which I felt was a bit too downcast for being the final song of the set, although it was a uniquely interesting experience seeing Jason slide a glass cup on his guitar’s fretboard as the guitar was placed flat on the stage. In an ideal world, they could start the set with ‘The Right Thing’ and end with ‘Rover’ or ‘Pusher’, but nonetheless, it was still a stellar performance by a band I had high expectations from.

In some ways Owl delivered what I had expected from them, but in many other ways Owl was a totally different animal on that stage compared to what I hear on the albums. It’s safe to say that the true dynamics of Owl’s music are best captured in a live setting, as you get to witness the manner in which each member is creating their individual pieces of music and how it’s combining with and complimenting the rest of the band, stuff that you mostly miss out when listening to the music at home. Jason was a madman up there, going nuts on his pedal board, switching effects constantly. Having interviewed him in the past I know for a fact that his guitar setup is the cheapest you would ever hear of, cheaper than Chris Wyse’s shoes, but in all honesty, the strength of the sound coming out of that guitar was second to none. He also had some serious interplay going on with Chris Wyse’s bass. Dan Dinsmore simply did ‘the right thing’, locking down into a solid rhythm and coming across as a creative rock drummer with nicely crafted fills, specially on tunes like ‘The Right Thing’, ‘Give’ and ‘Rover’.

As for Chris Wyse himself, he brought out all the good traits of a true rockstar, keeping a constantly high performance level throughout the set, interacting with the audience in between songs and moving on stage in a graceful, authoritative way. His vocals have a grunge element to them, but don’t be mistaken because Owl, specially with the newer material, is not your one-chord grunge band by any means. If you’re generally a fan of heavy rock and metal music but are seeking out something that’s a bit of a departure from the norm, do the right thing and go to an Owl show. 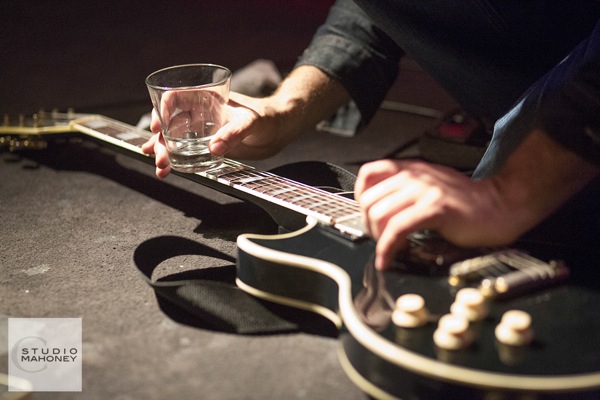