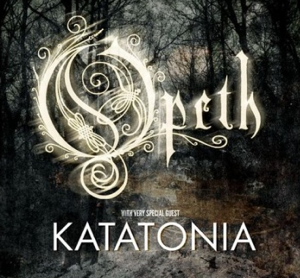 May 24th 2013, The Roxy, West Hollywood CA: Following the release of their tenth studio album ‘Heritage’, Swedish prog rockers began a new world tour in late 2011, which included a North American run with fellow Swedes Katatonia. Almost two years on, they are still on the Heritage world tour, and have yet again brought Katatonia with them for the North American leg. They visited the Roxy last night as they’re coming to the ending stages of this tour, and the smaller sized venue as compared to the previous LA visit was a deliberation on Opeth’s part to create a setting for what was supposed to be an intimate show. The venue was sold out well in advance, so the fans gathered in numbers and flocked to get the best possible spot once inside the Roxy at 7 PM. I had heard weird things about what Opeth are doing with the set list on this tour, so I was curious to discover how this gig turns out, and having seen them put on some incredible shows in the past, this time I was dreading the thought of a less-than-amazing Opeth live performance.

To me it was rather funny to observe the faces in the crowd and notice that I could count the familiar ones on the fingers of one hand. It used to be completely different in the past , as I used to know almost every person at an Opeth show. It just goes to show how drastically their fan base has changed in recent years. Anyhow, the show started promptly at 8 PM, with a rather contrived intro piece which was played on the PA while the members of Katatonia stood with their backs facing the crowd, and this kept going on for almost five minutes. That was a bit much, but finally they began their set in earnest with the song ‘Buildings from the new album Dead End Kings. The first few songs in this one-hour set did nothing by themselves to take this crowd by storm but served as a gradual build-up for the heavier bit to follow. ‘Burn The Remembrance’ was the first song that was able to transfer any sort of energy into the crowd, as the tempo was raised and a few heads started banging. This was a perfect warm-up for ‘Soil’s Song’, boasting of some enjoyable slow, heavy chorus parts that would have certainly appeased the doom fans in the house.

From then on, it was as if they found the right path to take this set forward on, and put forth a more than decent set. Jonas Renkse’s vocals still kept the melodic element intact while the rest of the band turned up the heavy not only on their instruments but also indulged in perfectly sychronized head-banging themselves, in the process urging the crowd to do the same. The song ‘Dead Letters’ from the new album sounded absolutely massive, a lot heavier than its studio recording, and that one combined with the following song ‘Forsaker’ might well have actually been the best part of the set. They ended with ‘Leaders’, thanked the crowd and left the stage. I find it really strange that they’re going to be returning to the Roxy on Monday for a headline show of their own after playing a 60-minute set at the same venue last night, but nonetheless, after the relatively dull beginning to their set, I was rather impressed with Katatonia’s performance here. They sounded heavier and better than they did two years ago, and I may be going out on a limb when I say that Katatonia was heavier than Opeth last night. 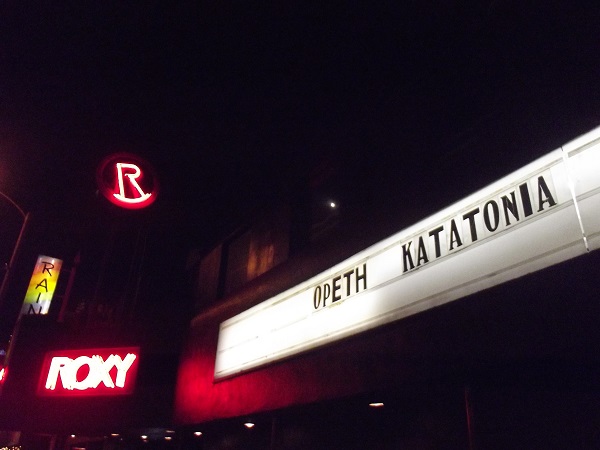 I stepped outside to get some air, and as I looked forward to Opeth hitting the stage at 9.30, I remembered all the good times I’ve had seeing them in the past, at the Wiltern on the Watershed tour in 2008, at the Avalon with Enslaved in 2009, and at the Wiltern again on the 20th anniversary tour in 2010. I wondered if this show was going to be anywhere near as good. They began on time as the Roxy stage curtain went up, and “The Devil’s Orchard” from the Heritage album was the first taste of this particular live Opeth experience. To their credit, they presented an almost entirely different set list as compared to the one they played on the 2011 tour, but honestly, their actual choice of songs left a lot to be desired. And I say this not to criticize them for the sake of doing it, but because I’ve seen them put on shows that were much livelier and energetic than last night. Granted, this was the first time they played ‘Atonement’ in Los Angeles, but the song did nothing to contribute to the flow of the set and I would have been totally fine with never hearing it played live.

But what followed next, thankfully, was a progressive death metal song by the name of Deliverance, easily the best part of their set, by a country mile. The head-bangers were loving this one, and it was one of the rare occasions that a mosh pit was suitable to the music being performed on stage. If they played only Deliverance repeatedly for 90 minutes, I would rock out to it every single time. But alas, it had to come to an end. ‘Heir Apparent’ was the next song and although it’s more gradual in its music, it was also one of the heaviest portions of the Opeth set. Sadly, all the momentum wonderfully built up by Deliverance and Heir Apparent was killed rapidly as ‘Haxprocess’, an acoustic version of ‘Demon Of The Fall’ and ‘Lines In My Hand’ were played next to close out the main set.

After a long delay of nearly 10 minutes, they came out in front of this restless crowd for an encore performance of ‘Blackwater Park’, and with it this night came to an end. It upsets me to say that last night was the worst Opeth show I’ve seen till date, but I’ve got to be completely honest. The one thing that distinguished them from every other band was the fact that their music knew no boundaries, and the manner in which they mixed the heavy with the mellow. But lately, I feel they’re losing that very essence by pigeonholing themselves into a more ‘accessible’ musical direction. Don’t even take my word for it. All you need to do is take a look at their crowds. People at the Roxy anywhere near the front few rows were definitely digging the softer bits of the music more, while the metal lovers were perched in the back, eagerly waiting for the heavy songs the entire time, getting restless, yelling out stuff like ‘Play some fucking metal!’ and ‘Shit’s weak, play electric!’

Talking of the acoustic version, I felt it was unnecessary for a band like Opeth who already have plenty of acoustic songs in their repertoire not to need converting a death metal song into an acoustic number. I was actually worried they’d include more acoustic versions, but thankfully it was just the one. All in all, except for Deliverance and Heir Apparent, this was an unbelievably weak Opeth performance, and frontman Mikael Akerfeldt’s constant interactions with the crowd were very excessive. Out of the 2 hours they were on stage, only 90 minutes of it was actual playing time. I get that it’s his band, but come on, this wasn’t a stand-up comedy show. His band mates looked incredibly bored as he went on and on with his monologue, for 10 minutes at a stretch at one point. And while performing, ‘Opeth minus Akerfeldt’ certainly seemed to enjoy playing the heavier stuff a lot more.

Opeth used to be one of the best live metal bands on the planet. As of today, they may be have gained an entirely new fan base, but based on last night, it’s safe to say they’ve lost the old magic.