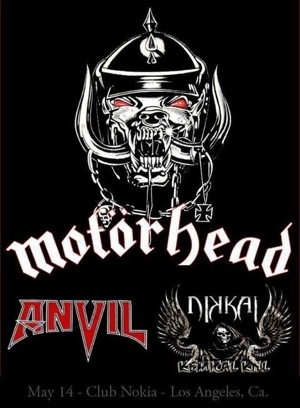 May 14th 2013, Club Nokia, Los Angeles CA: The loudest band on earth was back in town, and this time it was only a one-off show, specially for us Los Angeles folks. Yes, I’m talking about none other than Motörhead, who were here to blow eardrums at Club Nokia last night along with Canadian veterans Anvil and local metal band Kemical Kill as the support acts. Motörhead put out ‘The World Is Yours’, their latest studio album of original material, in February 2011 in the States and are currently working on a new album. So this gig had nothing riding on it in terms of promoting a new product. It was simply meant to be a treat for fans of the band’s adopted hometown before they begin their travels for the upcoming shows in Mexico and Europe, and as expected, the fans had turned up in huge numbers for this show.

The doors opened at 7.30, and the crowd flooded in to get the best possible spot to see the show from. Kemical Kill, led by 12-year old guitar prodigy Nik Kai, took the stage 10 minutes before schedule, at 8.20 PM. Right off the bat, they created a bad impression when their vocalist started singing. The clean vocals by him and the generic cookie-cutter metalcore vocals by the bassist were plain horrible, the rhythm section was bland, and Nik Kai’s performance on guitar was the only saving grace for this band, the only thing you could look at or listen to. It just goes to show that it’s impossible for any band to cover up bad vocals. The crowd was booing them rather loudly after the end of every song, with jeers of ‘You Suck!’ getting stronger and stronger. These jeers gained even more impetus when the band brought out a violin player for a couple of songs. It absolutely did not fit with the old-school vibe of this show, and I have to say they got what they deserved. Finally, to everyone’s relief, they ended their set at about 8.45 and left the stage. All I’d say is, Nik Kai is certainly a talented young guitarist but he needs to find other musicians to jam with, and quick.

Toronto-based trio Anvil, heroes of the 2008 documentary film ‘The Story Of Anvil’, took the stage soon after, and started off with the ‘March Of The Crabs’ instrumental from the Metal On Metal album before going into ‘666’ from the same album and taking their shortish set forward from there on. The last I had seen them was in February 2010 when they were on their own headline tour, and at the time I didn’t think they were anywhere near as great as they were made out to be in that documentary. Three years go by, and they’re back on an LA stage, but on this occasion I went in with no expectations. Their 2011 release ‘Juggernaut Of Justice’ was nothing special, and I had no hope in hell from their upcoming album ‘Hope In Hell’, which by the way doesn’t even have a North American release date yet.

If you go in with no expectations and/or have never seen them before, I guess Anvil is an entertaining band, more so to watch than to listen to, in my honest opinion. Steve ‘Lips’ Kudlow brought out some cheesy stage props like the microphone inside his guitar and his famous dildo, to go with his crazy facial expressions. I appreciate the fact that he seemed so happy to be up on that stage performing for a crowd that was already in the mood for old-school metal, a crowd that gleefully accepted Anvil over that other opening band, but the reality is, his vocals and guitar solos were showing his age as he struggled to keep up with the faster material. May be the band should choose slower songs to overcome that. Robb Reiner has always been a solid drummer, but my goodness, that drum solo in the middle of ‘Swing Thing’ was absolutely pointless. When a support band does a drum solo, it just baffles me. Lips’ guitar solo with the dildo just made me cry out in sympathy for that brand new hollow-body guitar of his. Amongst the actual songs they played, there were two off of ‘Hope In Hell’. The title track sounded pretty weak, but ‘Eat Your Words’ was decent.

They ended the 45-minute set with their biggest hit ‘Metal On Metal’. The mostly young crowd generally seemed to enjoy Anvil’s set, the band enjoyed playing here and fit in well with the Motörhead audience. They were way better than the opening band, but that’s not much of a compliment, and for me they’re over. They’ve milked the life out of that one hit song and that 2008 documentary, and haven’t done anything since then to prove that they still have it in them to make good music. I totally respect their legacy and history, but for how much longer can they stretch that one riff?

It was a 30-minute wait before the show’s headliners took the stage. Black Sabbath’s ‘Into The Void’ on the PA was a nice little warm-up for Motörhead‘s big onslaught. They appeared on stage at 10.15. Lemmy greeted the audience with his famous words, ‘Good evening! How are you doing? We are Motörhead, and we play rock ‘n roll!’ Right about this time, people started going nuts. I was standing right behind the rail that separated the front GA pit from the other sections of the floor, and lots of people started jumping over the rail to get into the pit, even though people already in the pit had probably paid extra money to gain that privilege. But who cared at that point? People were jumping and rolling off of that rail left and right, to the dismay of the handful of security staff who couldn’t do much about it. The band ripped into the song ‘I Know How To Die’ from the latest album The World Is Yours to start the set, and that turned out to be the only recent material for the night.

As someone who’d never seen them play the song before, I was thrilled to bits to hear ‘Damage Case’. They played it a bit slower than the recorded version, which actually wasn’t a bad thing. Somehow it made the song more enjoyable, a song you could head-bang to at even slower speeds than usual. I was loving the hefty dosage of the Overkill album in this part of the set, as they followed Damage Case with ‘Stay Clean’ and ‘Metropolis’. There are so many songs in that album other than the title track that deserve recognition, and I’m glad it happened tonight, albeit briefly.

Phil Campbell then made a mention of the new album and told us it’d be coming out in 3 or 4 months. He said, ‘Now we’ll play a song that’s … not on the new album.’ The mosh pits truly broke out in full force when that song turned out to be ‘Over The Top’. The younger crowd definitely didn’t seem to dig the slow songs off of Overkill as much as I did, and I could sense they were waiting to something a little more up their alley. Then came ‘Over The Top’ and changed the momentum. But immediately after, things calmed down again as Lemmy and Mikkey Dee left the stage and Phil Campbell played a soothing solo with his guitar neck lit in green light. The band reappeared and they brought out ‘The Chase Is Better Than The Catch’, a song that has become a bit of a staple in recent Motörhead set lists. But then they dug into their catalog, dusting off deep cuts such as ‘Rock It’ from the Another Perfect Day album, ‘You Better Run’ from March Or Die and ‘The One To Sing The Blues’ from 1916.

Honestly, in the past Motörhead shows I’ve seen, I felt they were on autopilot, not doing much different in the set lists. But last night was a pleasant surprise in that aspect, I must say. Looking at them, they still felt like they were on autopilot though, and I think that’s probably because they’ve been playing this set in recent shows in Europe. For a change, they gave us the same set they give to the Europeans, and I for one was mighty pleased about that. Everything came easily to the band, and they didn’t seem to make much of an effort or even break a sweat as they belted out this 65-minute set. That’s not a bad thing, that’s just how Motörhead roll.

The rarities were done with, and now it was time for the ‘hits’, the most popular live songs. ‘Going To Brazil’, ‘Killed By Death’ featuring Lemmy’s son Paul Inder and ‘Ace Of Spades’ formed the last portion of the main set. As expected, the crowd went wild and by this time the entire front GA pit was an actual mosh pit. It’s fun to look at mosh pits in general, but I thoroughly enjoyed seeing the one dude sitting on his friend’s shoulders and happily circling inside that pit. The encore had one major surprise. ‘So now, we’re going to do a Thin Lizzy cover, because you know, we can’, said Lemmy as they treated us with a cover of Lizzy’s ‘Are You Ready’. Motörhead doing a Lizzy cover? That’s a rare gem if I’ve ever seen one. Don’t forget us, we are Motörhead, and we play rock ‘n roll’, said Lemmy as he addressed the crowd for one final time before they went into ‘Overkill’. For the entirety of the song, we were absolutely flooded by strobe lights. I think I can still feel the daze in my head as a result of that. The song ended and with it the proceedings for the night, as the band took a collective bow and gracefully departed the stage, leaving their instruments switched on, with the volume turned up the maximum.

Performance-wise, as I said earlier, everything came naturally and easily to them. They’ve done this perfectly right for way too long to screw it up now. Obviously, with such a plethora of music tucked away in their mighty arsenal, not everyone would be satisfied with a Motörhead set, no matter what they play. Songs like ‘Iron Fist’, ‘Bomber’, ‘The Hammer’, ‘Fire Fire’, and many others were truly missed, but I’m sure the band is saving those for another time. My only gripe is, they could have played a couple more songs and made it a 75-minute set, but in general it was a satisfactorily awesome and deafeningly loud Motörhead set, well aided by modern marvel Club Nokia’s state-of-the-art acoustics. Here’s to many more Motörhead concerts and new albums in the near future. \m/