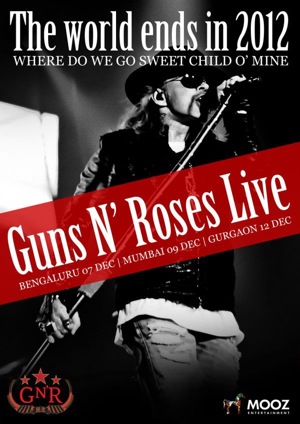 December 9th 2012, MMRDA Grounds, Bandra-Kurla Complex, Mumbai, India: Having performed in Bangalore a couple of days ago, Guns N’ Roses brought their first ever India tour to the city of Mumbai. Their Los Angeles gig last year was, in my absolute honest opinion, one of the best live performances I’ve ever seen, so I had high expectations from them this time, and waited eagerly for this show ever since the time it was announced. The day finally arrived, and I got to the venue at around 5.30. The line of people was extremely long for both the Silver and Gold ticket sections, but the organizing staff was handling things quite professionally, and it wasn’t long before we got inside, picked up our passes, and went to see the Mumbai-based opening band Goddess Gagged, who had just started their set.

I’ll admit, I hadn’t heard their music before seeing them at this show. When I first heard the band’s name, I was imagining a grindcore-type band, but I was completely wrong. They’re more like a modern progressive post-hardcore band with clean vocals, if that makes any sense to you. The majority of the vocals were of the clean variety, sung by Siddharth Basrur, while Bhayanak Maut vocalist Sunneith Revankar joined in on the growls, and Skyharbor guitarist Devesh Dayal is also in this band. I tried my best to like their music and get involved in their set, but it just wasn’t happening. To me, their material simply didn’t come across as strong enough to capture an audience in which the majority of people weren’t even familiar with the band. There was no great energy or stage presence either. Siddharth and Sunneith did a good job with their respective vocal deliveries, but it wasn’t really gelling with the music. Devesh Dayal was the saving grace, for sure. I enjoyed most of his solos, and he’s a guy I’d definitely want to see perform again. I don’t have any frame of reference as I’d never seen them before, but I think it’s safe to say this wasn’t Goddess Gagged’s best ever gig, and they didn’t fit in with the Guns N’ Roses style of music either.

Right, on to the Guns N’ Roses part of the review then. A word of warning: if you’re a hater of the current GNR lineup, or a hater of Axl Rose, I’d suggest you to stop reading right about now because you’re certainly going to be upset by what I’m about to write in the rest of this review.

There was a 30-minute break following Goddess Gagged’s set. I was a bit surprised to find that there was no alcohol sale inside the venue. Some people seemed pissed off but probably forgot about the alcohol soon, and just watched the show instead. At 6.45, a representative from the promoters Mooz Entertainment came on stage and told us that the band would hit the stage in just a few minutes. Sure enough, at 6.56, 4 minutes before the scheduled set time, the lights went out, and the band appeared one by one while an intro bit was played on the PA. They started out with ‘Chinese Democracy’, the title song off of the latest album, and the crowd were ecstatic to finally get to see this band right in front of their eyes, after an eternally long wait. But the fun part really began with the next song, none other than ‘Welcome To The Jungle’. The tone for the performance was set, and the band went from strength to strength, delivering the old classics, the Chinese Democracy tunes, as well as cover renditions, all with equal aplomb, energy and dedication. If you took a glance at their facial expressions during the show, you could tell that each member was having an absolute blast up on that stage. This was not a band simply going through the motions. This Guns N’ Roses lineup was putting its entire heart, soul, sweat and musical prowess into this performance.

In terms of their playing, the band pretty much nailed every single song they had on this truly epic set list. I probed deep, but to my eyes and ears there were no apparent mistakes. In fact, songs like ‘It’s So Easy’, ‘Estranged’, ‘You Could Be Mine’, ‘Sweet Child O’ Mine’, ‘November Rain’, ‘Civil War’ and ‘Patience’ were done so well that it was goosebump-worthy for many in the audience. Besides the original tunes and covers, they also had individual solos and jams wherein each of the three guitarists Ron ‘Bumblefoot’ Thal, DJ Ashba and Richard Fortus got a chance to take center stage and showcase their guitar-playing. Even though these solos broke up the set list, and I could sense a degree of impatience among a few members of the audience, I thoroughly enjoyed them. I’m very much appreciative of the band for doing this, because we got to witness the talents of these three amazing musicians. Fortus and DJ Ashba did excellent solos, but for me the highlight was, yet again, Mr. Ron ‘Bumblefoot’ Thal. Quite honestly, he’s one of the most delightful guitarists I’ve ever seen perform. He enjoys playing guitar so much that it transfers onto the audience as well. He proves that a guitarist doesn’t need to compose million-note solos if he or she can learn to play each and every note with feel.

As for Axl Rose, his incredible level of performance in 3-hour sets such as this one continues to leave critics and haters dumbfounded. He was full of energy, and his vocal delivery was intense. For their own pleasure, the haters can keep on posting the same stupid internet memes about Axl being ‘late’, ‘fat’ or ‘unable to sing’, but the reality is totally different, and the 20,000 people that turned up for this show got to experience the real Axl Rose.

Sound-wise, everything was great, at least from where we were standing, and the high quality of the sound system played a crucial role in us being able to hear what these musicians were doing on stage. The evergreen ‘Paradise City’ was the final song for the night, and right when the song kicked into gear, the entire Gold section got engulfed in paper confetti. At the end of the song, the band took a collective bow and thanked the Mumbai crowd for their attendance. People left the show thoroughly satisfied at getting to see a band that gave them their money’s worth, and then some. For me, the highlight was still ‘November Rain’. There’s just something about that song and the perfection with which they play it. The memory of that rendition is going to stay in my mind for a while.

All in all, Guns N’ Roses lived up to my expectations and put on an insanely fantastic performance. This was a ‘rock concert’ in its truest sense.