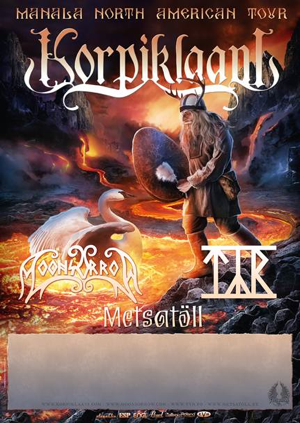 September 12th 2012, Whisky A-Go-Go, Hollywood CA: The air was electric at the world famous Whisky-A-Go-Go as Tyr, Moonsorrow and Korpiklaani were set to take the stage. The Whisky was filled to capacity and despite the police-like search that the security staff meted out on everyone who tried to enter the venue, the fans were in good spirits and ready to party. The first band up was Helsott, a band straight out of California.  I unfortunately missed most of their set, but what I did hear was pretty great. They’re definitely a band worth checking out. The next band up was Metsatöll, from Estonia. I had never heard of them before seeing them, and I have to say, they were absolutely phenomenal. Their use of native folk instruments was quite a treat and their stage presence was intense. I really loved how they interacted with the crowd and made everyone feel like they were a part of something big with their genuine crowd appreciation; true showmen. While the music was great, the sound at the Whisky was abhorrent and everything kind of ran together after a while. Still; they definitely made their mark on the crowd.

Next up was Týr; Scandinavian metal at its finest. Sadly, the same unfortunate sound issues were quite prominent throughout their set. The guitars were mixed far too low, the vocals were too low, and the bass was a little too high. Still, they managed to put on a great show and really got the crowd going. They played a wonderful mix of both new and old music, and pumped the crowd up even more. I can’t say I’m too familiar with their material, but the crowd really seemed to love them. The only drawback was the mix. It was quite unfortunate, but they made the best of what they were given.

The next band in queue was the legendary Moonsorrow from Finland. When they came out on stage, I had a pretty good laugh at their ridiculous image; heads and faces covered in fake blood. I thought it was pretty cheesy, but the moment they started playing, they sounded great. Their eclectic mix of folk and black metal was the perfect sound for the Whisky. The crowd seemed to be really into them, especially when they played some of their much older material. Their amount of energy, presence, and overall showmanship was nothing short of awe-inspiring. The Whisky’s sound still left a lot to be desired, as the keyboards were basically nonexistent in the mix, but Moonsorrow managed to play through the crap and kick some major ass.

Finally, it was time for Korpiklaani. They opened the show with Tuonelan tuvilla and the crowd went wild. The sound issues were finally fixed and Korpiklaani was free to power through their set without any issues. I noticed something was off about their sound, and it took me a minute to realize that Jonne wasn’t playing his guitar, as he seemed to have a sprained finger. Their sound wasn’t as rich and full because of it, but they still managed to sound fantastic. The band delighted the crowd with songs both new and old, and the atmosphere in the Whisky was beautiful. If you’ve never been to a Korpiklaani show, it can only be described as one big party where nobody understands the language, but everybody is still on the same page; truly magical.

Their set was filled with tunes both old and new, and each song got progressively better as the night went on. They chose the perfect plethora of songs to play, diving into their older albums, as well as their new album Manala. In the middle of their set, the music stopped and the band left the stage. It took me a minute to figure out what was going on, but before I knew it, Tuomas Rounakari was sitting in the middle of the stage on a roadcase, playing an absolutely blistering fiddle solo; no background instrumentation, just a man and his violin. I never realized the violin could be such a badass instrument, but he made it work.

The band came back and began to play their more well-known songs.  Vodka, Rauta etc…One of the most memorable moments of the night was when they played Happy Little Boozer and Ville Sorvali from Moonsorrow came out to sing with Jonne. They sang together for a brief moment before Ville managed to knock Jonne and himself to the floor while still singing; true partying.

The band played on, performing Tequila and Beer Beer before ending their set. They left the stage for a brief moment to come back and play one of my all-time favorite Korpiklaani songs, Wooden Pints. The crowd went into full party mode during Wooden, with people drinking, dancing, and laughing. It was wonderful. They ended the set with Pellonpekko and off they went.

All in all, this was a fantastic show, minus the ridiculous sound issues at the Whisky. It was a night full of true folk metal and good times. Korpiklaani really knows how to throw a party!

(All set lists courtesy of metalsetlists.com)