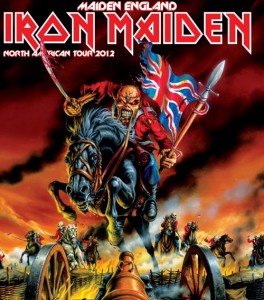 August 3rd 2012, Shoreline Amphitheater, Mountain View CA: An Iron Maiden show isn’t any ordinary heavy metal concert- for hundreds of thousands of fans all over the world, it’s the live event of the year. I’ve been lucky enough to see the band on the last two times they came by before this Maiden England tour, and I’m happy to report that Iron Maiden has once again reasserted their status as the greatest live act in metal. Shoreline Amphitheater was the setting for this go around, and twelve thousand metal fans along with myself were treated to a spectacular live experience. Maiden England is a tour that is not to be missed, and any music fan with even a passing interest in heavy metal can expect a phenomenal show from Iron Maiden in 2012.

Coheed and Cambria were the opening act on this date. I’m going to be honest and state right away that I’m really not a fan of their music. These guys are definitely very talented musicians, and they certainly do a great job of bringing their complex studio songs to the live environment, but I just didn’t enjoy what I heard. In their defense, there just isn’t a group out there that could ever be a successful opening band for Iron Maiden. Even a legendary artist that I love like Alice Cooper, who has opened the dates in the East Coast and the Midwest, is a bit out of place playing before Iron Maiden. Again, while Coheed and Cambria are a more than respectable outfit, they (or anyone else for that matter) just aren’t a fitting opening band for Iron Maiden.

When Coheed’s set ended, the audience surged towards their places at Shoreline Amphitheater, and the entire venue was packed to the gills with rabid fans. Every seat was filled, and the lawn was jammed with fans fighting for the closest view they could get. This was the highest attended Iron Maiden show I’ve been a part of yet, and it truly made me happy to be among the thousands of fanatics at Shoreline. On the merchandise end of things, the band once again offered a huge and varied assortment of shirts, posters, flags and other goodies for fans to blow their cash on. A California event shirt was available as expected, and the tour shirts with unique designs were consistently impressive. However, these items were massively overpriced, coming in at $40 for one shirt. This was downright appalling, as I had never attended a metal show with such expensive merch. Some of the tour shirts, nearly all of the posters and many of the event shirts can be found on Iron Maiden’s website for way cheaper than what you’ll find at the show, so I encourage fans to take that route instead of buying items at the concerts.

At 8:55 sharp, “Doctor, Doctor” began to play over the PA and everyone knew what was coming next. After a tape of the song’s intro played, Iron Maiden stormed out of the gate with “Moonchild,” a fantastic choice to open the show. The band tore through “Can I Play With Madness” and “The Prisoner” with hardly a break, save for a quick apology from Bruce. Shoreline’s stage was sadly too small to accommodate Iron Maiden’s full show, and Bruce graciously said sorry and promised to show off plenty of pyro to make up for it. Indeed, pyrotechnics were a solid part of the show, and Eddie still managed to make an appearance during “The Trooper.” Much to my surprise, Bruce opted to lay off the speeches and the band instead blew through the songs very quickly and efficiently. His longest spiel of the night was an introduction to “Afraid to Shoot Strangers,” a song that he himself admitted was a bit out of place in the set. I love that the band decided to throw the fans a curveball with this song, but I think it could have come at a better place in the set- having an epic like “Afraid to Shoot Strangers” coming in so early in the show definitely felt strange.

This was the one exception to an otherwise expertly paced set- every warhorse and set staple was followed by a fan favorite that wasn’t played too often. For me, “The Prisoner” was the absolute highlight. Pulling this song out was not only a great way to match the Maiden England video’s tracklisting, but also to showcase an awesome song that hadn’t been performed in over two decades. I also loved hearing the songs that I didn’t get to see on 2008’s Somewhere Back in Time Tour, like “Phantom of the Opera” and “The Evil That Men Do.” It’s impossible to talk about this Maiden England tour without mentioning the band’s performance of the title track to “Seventh Son of a Seventh Son” though. Maiden absolutely did this complex and amazing song justice, and even showed off their live keyboardist, Michael Kenney, during the song’s atmospheric middle section.

The set worked great for both longtime fans and folks seeing the band for the first time, but the lack of “Hallowed Be Thy Name” has to be noted. Its absence certainly didn’t detract from the show, but its inclusion would have been more than welcome and would have made an already great set absolutely perfect. Otherwise, new and casual fans got to hear every song they would have wanted, and the more hardcore and older fans were given enough treats to justify their attendance. Iron Maiden advertised this tour as being purely focused on old songs, and they delivered on that end. I do hope that the band does eventually bring a show with an even balance of old and new songs to North America soon however.

As for the band’s performance, there isn’t much to say that hasn’t already been said by fans for the past thirty years. Bruce Dickinson is quite frankly, the greatest heavy metal frontman alive, constantly running all around the huge stage and giving his still amazing voice a total workout. Even if his voice is starting to show signs of wear (he sounded noticeably strained on “The Evil That Men Do”) I have yet to see a performance matched by any other heavy metal singer. Nearly everyone in Shoreline was in total awe when he hit his insanely long note during the middle of “Seventh Son of a Seventh Son” with ease. Steve Harris of course, gave his usual energetic show onstage, and his basslines easily cut through the great mix. There wasn’t a single guitar solo that was buried, and every piece of Nicko McBrain’s drums were audible. Janick Gers remains a total goofball compared to Adrian Smith and Dave Murray’s more laidback stage presence, which some fans seem to dislike, but I honestly don’t mind it. As far as I’m concerned though, he should stay far away from Adrian’s solos and stick to the ones he originally played on- hopefully a more balanced set in the future will allow this. Adrian had the opportunity to sing a few lines during “Wasted Years”- something that I thought made the song even better, especially considering what an underrated vocalist Adrian is.

After the traditional set closing pair of “Fear of the Dark” and “Iron Maiden,” the band took a short break only to return for a more than solid three-song encore. The fan favorites “Aces High” and “The Evil That Men Do” kept the excitement flowing, while “Running Free” was both a nice nod towards the band’s roots, and a fun way of having Bruce introduce everyone while still involving the audience. The show had finally ended, and nearly everyone around me were unable to contain their praise for what they had just seen.

Despite my minor complaints, this Iron Maiden show was as phenomenal a live experience as I could have asked for. Sure, I would have liked to have seen the full stage show, and no Iron Maiden show will ever truly be perfect without “Hallowed Be Thy Name” but as it stands, the Maiden England tour is an astounding show to see. The members of Iron Maiden continue to age, but their prowess and ability as a live act continue to be unmatched by any heavy metal band around. This live ability coupled with one of the greatest catalogs in metal history make for a live show that has to be seen. An Iron Maiden show is one of the most dependable two hours of music a metalhead can invest in, and every one of their fans can count on an amazing time if they decide to attend the Maiden England tour.