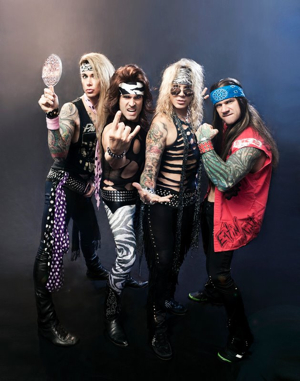 July 12th 2012, The Regency Ballroom, San Francisco CA: Having been born in 1993, I’ve never had the opportunity to see a genuine hair metal concert. Many of the original bands are well past their prime and no longer deliver the spectacle that they put on night after night in the late eighties. A lot of those old “hair metal” bands don’t even have much hair anymore! Steel Panther are the closest thing to having that musical void filled, and ever since “Feel the Steel” was released in 2009, I’ve always wanted to experience the band live. Despite this desire, I had truly taken Steel Panther for granted throughout my time living in Los Angeles. Even though the band has played weekly shows at the House of Blues on the Sunset Strip, I had never gone out to see the band until now. This show at the Regency Ballroom in San Francisco has shown me what an amazingly fun time I have been missing however. Steel Panther put on an insanely fun show, one that featured astonishingly tight musicianship, great songs, and some of the most over the top and entertaining stage antics I have ever had the pleasure of witnessing.

The show began with an opening set from Oakland’s Electric Sister. Their songs, a mix of Guns ‘n’ Roses style hard rock and classic metal, were a perfect match for the older crowd. Singer Thadeus Gonzales’ full throated wail was what impressed me the most about the band, although Jason Lucero and Nicholas Hernandez’s dueling guitar solos and harmonies were nothing to scoff at either. There was no screaming, Cookie Monster-ing, blast beats or down-tuned chugging to be heard here, only classic, testosterone-charged rock and roll. For the first time however, I actually saw a band that was too active onstage. Normally, I am an advocate for band members running around the stage and interacting with the audience, but this was just too much. Thadeus was literally always in motion onstage, constantly running around and jumping onto the floor. If this was a punk or thrash concert, this type of activity would be appreciated, but given Electric Sister’s hard rock songs, it just came off as strange. Jason and Nicholas even managed to pull off power slides during the last song of their set, but it really was more silly than cool. Electric Sister’s songs were good enough for the audience to get over these shortcomings however, and the band received a well deserved applause at the end of their set. This is a band that would easily benefit from a more focused and monolithic presence onstage, and I hope that is what I see the next time I catch Electric Sister. In the mean time though, I’ll happily listen to their first and only album, “The Lost Art of Rock and Roll.”

After a rather long wait, Steel Panther and kicked off their set with the “Supersonic Sex Machine,” a speed metal number from their latest album, “Balls Out.” I was immediately blown away by Michael Starr’s vocals, which were shockingly close to his performances on Steel Panther’s records. The man absolutely nailed every banshee scream, and only had the audience sing words when it was really called for. Everyone else in the band also delivered extremely tight and flawless performances; there wasn’t a bum note to be heard from guitarist Satchel, and Lexxi Foxxx and Stix Zadinia were as taut a rhythm section as any band could ask for.

After tearing through the first two songs of the set, the band engaged in an introduction segment that lampooned overly long chats in between songs. Where I would normally complain about such a long break in the middle of the music, this bit was absolutely hilarious, and had the entire audience in stitches for its duration. Michael even alluded to his and Satchel’s past role in the Atomic Punks, a Van Halen tribute act, by introducing Satchel as being faster than Eddie Van Halen (Satchel of course, quoted “Eruption” upon this introduction). The other fairly big break between songs was Satchel’s guitar solo segment, which managed to be a good bit of fun. He mainly showed off classic metal riffs like “Iron Man,” “Master of Puppets,” “Breaking the Law” and quite a few others, but threw in some of his own shredding for good measure.

The band failed to break character throughout the entire set, and their politically incorrect non-sequiturs and shenanigans brought a huge amount of laughter to the Regency. Lexxi would tend to his long blond locks during the breaks in between songs, Satchel engaged in every clichéd guitar pose you could think of, and he and Michael were always asking women to remove their shirts (for the record, a handful actually did). This isn’t a show for those easily offended- consider yourself warned. As over the top as these guys were, it’s easy to imagine the original hair metal acts being as ridiculous as Steel Panther were at this show. Just watch Whitesnake’s video for “Here I Go Again” if you don’t believe me! As I said earlier, the band members’ performances were top notch, but there was just one element that bugged me throughout the set. The guitar harmonies during Satchel’s solos seemed to come out of nowhere- he moved around onstage too much for it to have been a harmonizer pedal, so either a second guitarist was playing backstage or the harmonies were being piped in. This was the one thing that made me question the musicianship onstage. The fact that their performances were otherwise spotless only made that issue more jarring.

Besides that complaint, I had a blast throughout Steel Panther’s whole set. All of the songs in the set translated well live, but “Community Property” easily stole the show as the highlight. Nearly everyone in the thousand-plus audience sung along throughout the entire song, and this was one of the rare instances where Michael had the audience sing some words. The songs from “Feel the Steel” were given a somewhat warmer reception from the crowd, but the chant during “Gold-Digging Whore” was something that the audience was more than happy to participate in and proved to be another highlight of the show. The band even invited an army of girls to invade the stage for “It Won’t Suck Itself,” which was definitely a fun way to have some of the audience be a part of the show. From what I know, Steel Panther tend to perform covers in their House of Blues sets, but I was very pleased that the band stuck to only original material for this show. I have to admit though, I would kill to see the band do a Van Halen cover- Michael Starr could easily trounce David Lee Roth at his own game these days.

There wasn’t a dull moment throughout Steel Panther’s 90 minute set. If the audience wasn’t rocking out, they were laughing, or possibly doing both at the same time. The band capped off their main set with their classic “Death to All but Metal,” but returned for a two song encore of “Eatin’ Ain’t Cheatin'” and “17 Girls in a Row.” These two were rather random choices to finish the show, but their placement in the set certainly couldn’t be considered a detriment. Despite the $25 ticket (that’s before the service charges!), I feel that Steel Panther absolutely gave the audience a show that was worth their money. The fact that the bill was short and unified in terms of the music presented only made the show stronger as a whole. In short, I absolutely encourage anyone to go see a Steel Panther headlining show if they can, I certainly don’t plan on taking these guys for granted any longer.