After an eventful start with the first three shows in Scottsdale AZ, Albuquerque NM and Austin TX, Night Demon’s tour with Holy Grail rolled further into Texas and then Oklahoma City and Kansas City, and this part of my ‘Heavy Metal Utopia’ tour blog brings you all the scoop from these past three shows. But first, read Part 1 if you haven’t yet.

The short three-hour drive from Austin to Dallas was smooth and we were blessed with some very fine weather here in Texas, and thankfully so, as this would become an important factor for our show in Dallas. The Gas Monkey has two establishments under its name across the street from each other, a big theatre venue and a bar & grill. At first we were sent to the wrong one, only to find out that our show was on the outdoor stage at the bar & grill, not in the theatre. I had never done an outdoor gig with Night Demon and this was the band’s first show of this kind in America. I was blown away by the professional and top-notch setup here. They had a whole in-house crew loading our gear in, and were available at all times for any help and to answer any questions we had. The food was great too, and with hugely increased eating capacities through past Night Demon tours, I was able to consume a hefty serving of the Gas Monkey Garage Burger without falling into a food coma. This was a fantastic setting for the show, with a big stage, standing room for a few hundred people, and the entire enclosure surrounded by water. We got lucky with the weather, otherwise an outdoor show in December could have been an entirely different story. As it turned out, the show was a lot of fun for all involved, and my initial concerns about whether our lighting setup would be adequate for a stage this size were erased during the set, because as you can tell from photographer Lewis Leveridge’s snaps, the lights did the job.

This being the 11th anniversary of Dimebag Darrell’s tragic and sudden death, Holy Grail rightfully did a little tribute with a Pantera teaser to end their set. It was quite fitting for us to be in Dallas, Texas on this date, as Pantera’s influence can not be felt to the same extent anywhere as much as it is in Texas, and Dallas in particular. This has been a tricky, hit-and-miss town for us on past tours and even though the Black Dahlia Murder/Goatwhore/Iron Reagan show taking place at Trees the same night may have affected the turnout, it was still a good time. One more thing that deserves a mention here is the refreshing anmoly of the house DJ/sound guy playing a selection of tunes from young bands like Enforcer, Cauldron and Striker instead of the same old ‘classics’. In my opinion there is enough new heavy metal out there today that clubs do not need to play any old music whatsoever, and I’m glad at least someone agrees, although it was strange that Holy Grail was included in the playlist.

Next up was another short drive from Dallas to Oklahoma City, for a show at 89th Street Collective, formerly The Conservatory. But before that, we made a quick stop on 420 Elm Street in downtown Dallas to visit the ‘X’ that marks the spot where President John F. Kennedy was assassinated. And we were there just a little after 1 PM, which garnered a lot of ‘Dallas 1 PM’ comments on social media. Old-school metalheads will get the reference here. 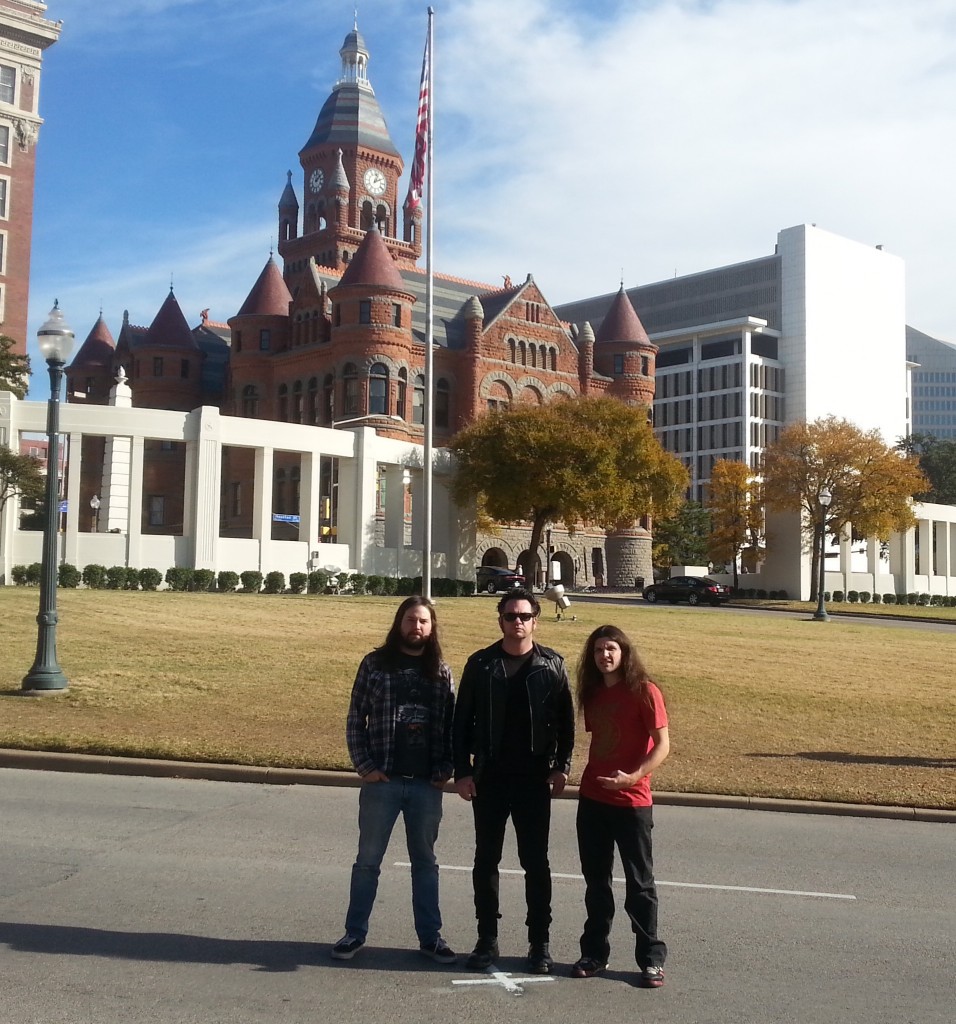 Just over three hours later, we arrived at 89th Street Collective. It’s a cool DIY/warehouse style venue and the sound was far better than I imagined when I first stepped in. It was the lightest turnout of the tour so far, so Brent and Jarvis decided to experiment with an almost completely different set list from what we’ve been doing at these shows. ‘Lightning To The Nations’, ‘Road Racin’, ‘Axe Crazy’ and ‘Livin’ Dangerous’ were played and some of the regulars were dropped. ‘Lightning’ is most definitely my favorite song to do lights for, and I had absolutely no problem with the band opening the set with that song. It just sucked the crowd in and the set switch totally worked. There were some real Holy Grail diehards that turned up even before doors opened, but they watched Night Demon and looked like they became fans for life. This was Night Demon’s first time in the city and state of Oklahoma, and won’t be the last. This Holy Grail tour has been really ideal for Night Demon as a support act, as it’s putting the band in front of an audience that has similar taste but at the same time there’s also a much-needed element of crossover, given Holy Grail’s slightly more eclectic and modern interpretation of traditional metal. Plus, they are all great dudes, which certainly doesn’t hurt. Their setup is different from Night Demon in almost every aspect, as they travel in a van with a trailer and do not have any additional crew members. So they take turns to do merch every night and I’ve been getting to know each member of the band as a result.

Driving to Kansas City always automatically instills a good, positive feeling, because we’ve never had a bad show here. We arrived at the Riot Room for our third show at the venue this year. Night Demon has developed a strong fanbase in this part of America, so we were confident of a good outing, but the greatness of this evening far exceeded our expectations. It felt like second home, much like Cleveland and the state of Ohio has, every time we’ve been there. Hometown classic metal stalwarts Vanlade played a righteously solid set right before ours, the song ‘Hail The Protector’ standing out as particularly glorious. As has been mentioned in an article I posted very recently, they are one of the best bands I’ve had the fortune of discovering this year and fans of the genre must pick up their latest album ‘Rage Of The Gods’. As soon as their set ended, I heard somebody screaming ‘I am ready to drink from the chalice!’ and I knew this was going to be a great set. People gave Night Demon such a tremendous response, it was incredible. Heads were banging, words were being sung along, and people were clearly waiting for me to get on stage as Rocky because they lost their minds as soon as I did so. So far on this tour I must admit I’ve felt awkward on stage as the crowds haven’t responded as much as I’d like, but I really enjoyed my time on the Riot Room stage. Doing lights here was just as much fun and even more crucial, and I felt that the Night Demon set stood out from the other bands because of our lights. I’m so used to operating my console nowadays that I can multitask while doing so, and on this occasion I tried my hand at taking an instagram video with success.

The tasty local KC brew Pillsner was available for a mere $3 at the bar, and on the generous tab the venue gave to the band, I consumed many of those. It was awesome seeing so many familiar faces at this show, although the not-so-familiar folks and Night Demon first-timers still sometimes mistake me for Brent or James Paul Luna and get extremely disappointed when I tell them they’re wrong. Talking of Luna, he’s been doing a splendid job on Holy Grail’s renditions of ‘Fast As A Shark’ and ‘No Presents For Christmas’ on this tour. Seeing them every night keeps bringing back memories of all the times I’ve seen them in the LA area, and it still feels a little surreal to be on tour with them all these years later. Songs like ‘Call Of Valhalla’ take me all the way back to the early days of Holy Grail, and even some of the members’ pre-Holy Grail bands. In fact, I just downloaded White Wizzard’s ‘High Speed GTO’ on my brand spanking new Spotify Premium account, and shall crank it full blast on the drives between shows. After the show, all of us in Night Demon and Holy Grail indulged in a great bonding session while the Riot Room remained open for some after-hours dance music where a dude stood on stage with a laptop, bass guitar and pedal board, and got KC’s hipster crowd grooving. As remotely different as it was from the metal show, it was kind of interesting, and the guy showed talent. All kinds of music except for rap and hip hop have positive traits, and this certainly was as I came very close to busting a move.

Before the two bands meet up with Flotsam And Jetsam for two regional Southern California gigs, we have four shows left on this run, and I’ll bring you up to date with those in the next part of the ‘Heavy Metal Utopia’ tour blog. Until then, follow Metal Assault on your favorite social networks.