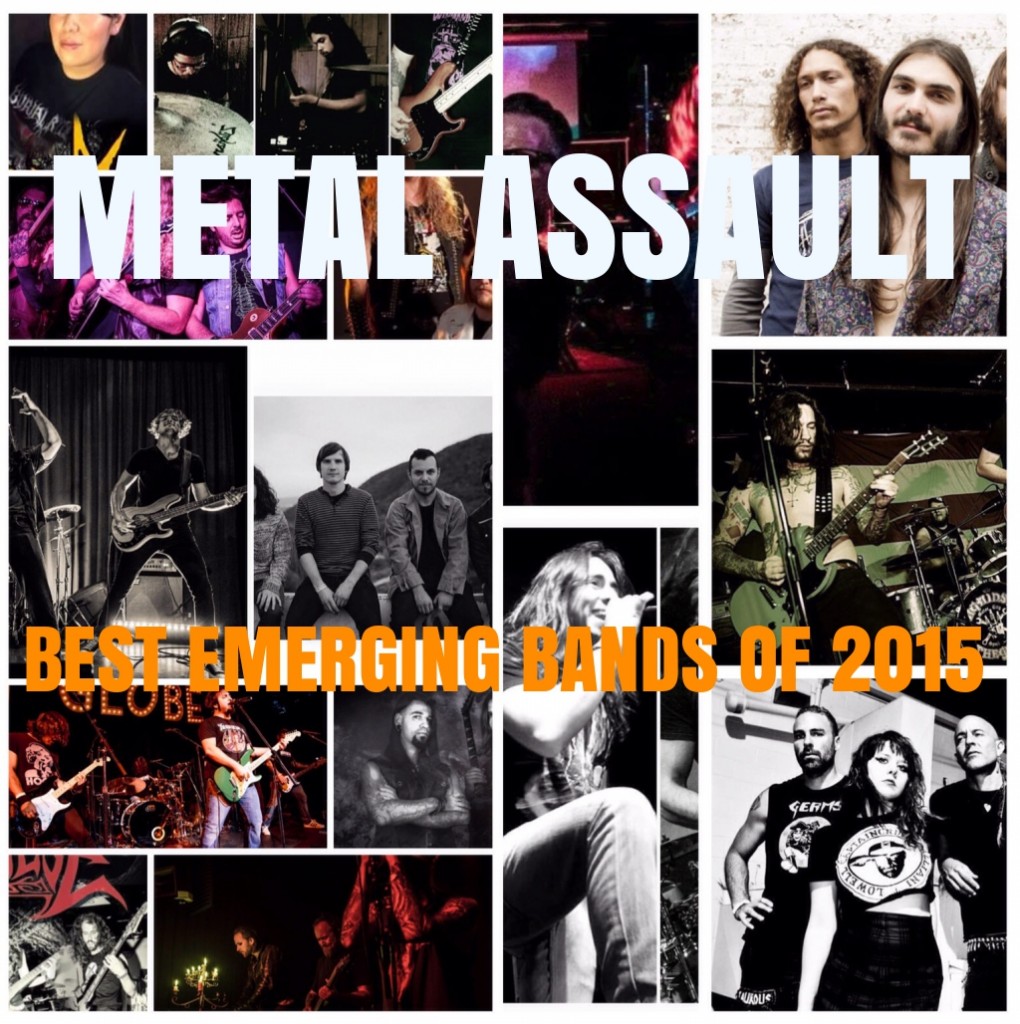 The year of 2015 has witnessed the emergence of numerous hard rock and heavy metal bands, some brand new, and others rising up in a manner they hadn’t done before. The Los Angeles metal scene treated me to a few such acts, but throughout my travels on US tours this year I got a chance to discover more talent than in previous years. For starters, LA rock ‘n roll quartet Others would have certainly made this list if I wasn’t working with them as their lighting tech, so they deserve an honorable mention. Without further ado, here are my picks for the top 20 emerging bands of 2015:

20. Deth Crux – Featuring Farron Loathing (Lightning Swords Of Death) in their ranks, Deth Crux is a new Los Angeles-based death rock group that released their debut EP ‘Pears Of Anguish’ and played their first shows this year. Deth Crux’ dark, haunting tunes with clean vocals and elements of punk/post-punk definitely make an impact and stand out, as they are one of the very few new bands pursuing this style. Through Deth Crux, these talented underground musicians are presenting new, previously undiscovered facets of their creativity and are off to a great start.

19. Suspended – Based out of Albuquerque, New Mexico, all-female death metal trio Suspended have been around in their local scene for a number of years but with a change in lineup in 2014 and its solidification in 2015, they announced their true arrival with stage-scorching live shows and compelled first-timers to take notice this year. When it comes to combining technical playing skill and brute force, there isn’t a rising force stronger than Suspended.

18. Tartar Control – A hardcore punk band with two members dressed as mormons and a robot drummer, Tartar Control is the most unique and intriguing entity Metal Assault, or anyone for that matter, came across this year. They played one of the most insanely entertaining shows ever at the Roxy in West Hollywood opening for The Dickies, and won themselves a whole new fan base.

17. The Rare Breed – Los Angeles-based heavy riff worshipping trio The Rare Breed put forth a string of impressive performances as local openers for national touring acts at LA area venues like Complex, Loaded and Los Globos, and garnered the unanimous approval of every single person that saw them. Pulling off a giant coup of a feature in a Metal Hammer compilation CD towards the end of the year, The Rare Breed are all set to rise much further in the stoner rock genre through 2016 and beyond.

16. Sonic Pulse – Boston, Massachusetts power/thrash/shred quartet Sonic Pulse have been a band for nearly five years but garnered attention in 2015 through their excellent performances opening for the likes of Skull Fist and Night Demon in the New England area. With tunes filled to the brim with speed and power, and indulging in unabated Marty Friedman worship, Sonic Pulse live up to their name and carry the hopes of the power/shred/thrash world on their young shoulders.

15. Thorns Of Sin – LA blackened thrash/melodic death metal group Thorns Of Sin is the brainchild of multi-instrumentalist, composer and producer Sergio Varela and has been developing as a concept and studio project for a number of years, but Varela finally managed to find the right group of musicians to take the band on stage more actively than ever in 2015, playing a streak of impressive shows in the Los Angeles/Orange County area. For fans of extreme metal, Thorns Of Sin is certainly a band to look out for in the next few years.

14. Ironaut – Los Angeles-based stoner rock trio Ironaut, presenting the talents of Erik Kluiber (ex Gypsyhawk, ex White Wizzard) in a new role as a frontman playing bass and singing lead vocals, started out as an instrumental trio in early 2015, then incorporated vocals into the mix, and having decided upon that as the way forward, released a fantastic self-titled debut EP and played some good local gigs, including an opening slot for Crowbar. Ironaut promise to serve as worthy representatives of stoner rock.

13. Mammoth – Los Angeles-based instrumental progressive metal trio Mammoth caught eyes and ears when they served as the local opening act for Mr. Big at the Saban Theatre in Beverly Hills in February this year, and since then, they released a splendid EP called ‘Innate’ and played on stages much smaller than the Saban but brought a show of the the same level to leave prog fans gasping for air. This talented bunch infuses the complexity one would expect from an instrumental prog band, but also bring some catchy, heavy grooves to keep things interesting. Mammoth have made the kind of impact that justifies their name.

12. Grand Lord High Master – LA extreme metal group Grand Lord High Master came across as the weirdest new band of the year and left an indelible impression on first-timers that saw them open for bands like Cattle Decapitation, Castle and King Parrot, and at this year’s Knotfest. Their 2015 self-titled debut EP gives listeners a fair indication of what the band is about but in the live setting the impact is enhanced much further. Grand Lord High Master have proved themselves to be a must-see live act.

11. Socionic – LA progressive metal group Socionic released their new album ‘Dividing Horizon’ this year and were active as a live band, their performance at the Viper Room in November standing out as particularly memorable and overwhelmingly powerful. Taking inspiration from the likes of Tool, Socionic infuse their own elements of heavy music and great clean singing to form their interpretation of prog, and come across as a worthwhile entity for fans of the genre.

10. Vanlade – Kansas City classic metal champions Vanlade have spread their gospel of denim, leather, clean vocals, melodic guitar harmonies and galloping riffs and rhythms more in 2015 than they ever have in their short career so far, and keeping up their performance levels as well as appearances, they have all it takes to satiate metalheads of the old-school kind. As witnessed by Metal Assault firsthand, Vanlade already has a solid following in Kansas City and surrounding areas, and this year made giant strides towards building a nationwide fanbase with successful touring. As long as Vanlade keep moving forward at this rate, epic heavy metal is in good hands.

9. Gygax – Ventura, California quartet Gygax prides themselves in saluting vintage rock ‘n roll, but with lyrical content and imagery based on Gary Gygax and Dungeons & Dragons, they have all the ingredients to cater to the nerd population and old-school rock/metal fans alike. Boasting of Eric Harris (ex Gypsyhawk) as their frontman, Gygax specialize in smooth jams and good times. D&D RnR forever.

8. Yeghikian – Stoner rock group Yeghikian formed in 2014 and released their debut album ‘You’re Next’ the same year, with frontman Alexy Yeghikian writing and recording it within 8 days and playing all the instruments. But he then put together a full band, and Yeghikian surfaced in the Los Angeles scene in 2015 in a manner very few other bands did, bringing some extremely catchy jams that put this band head and shoulders above most in the genre, boasting of unmatched clean singing, exemplary guitar tones and crushing grooves. A great band in the making.

7. Sisters Ov The Blackmoon – LA female-fronted stoner doom metal quintet Sisters Ov The Blackmoon is a very new band that started performing only this year, and they’ve already succeeded in not only composing some of the catchiest and most memorable riffs but have progressed by leaps and bounds with every live show, ending 2015 as one of the best bands to have surfaced out of the Los Angeles area this year, a band that blends seamlessly in both the so-called mainstream and underground scenes in the city. Aside from their LA shows, Sisters also ventured on a short tour or two, and are poised to bring the doom to an even greater extent in 2016.

6. Deathkings – LA doom/sludge outfit Deathkings wowed audiences in the local underground community with mesmerizing live rituals, presenting some new material that bodes well for the next full-length release. Even with lengthy songs, they successfully handle the challenge of keeping listeners and audiences interested, and their transitions between ethereal mellow passages, violent outbursts and slow heavy doom are expertly crafted. For doom fans seeking newer underground bands, Deathkings is a no-brainer.

5. Yidhra – LA doom stalwarts Yidhra have been around since 2008 but enhanced their reputation much further than ever in 2015 with tremendous new material on the ‘Cult Of Bathory’ EP and captivating live shows, matching the sonic stature of heavy giants like The Skull and Crowbar when sharing the stage with them as opening act. The only stoner/doom band to incorporate the usage of the theremin as an instrument, Yidhra have stamped themselves very strongly in doom fans’ memory this year.

4. Novareign – Brand new LA progpower quintet Novareign made a huge impression this year with a righteous combination of soaring clean vocals, spellbinding guitar harmonies and skillful rhythmic shifts. The songs they’ve written so far have the potential to win fans at first listen, and as a live band they bring the musicianship with personality and stage presence to create a winning combination. Novareign is already a powerful band boasting of solid musicians, and even great things are expected from them in the near and distant future.

2. Against The Grain – Besides putting out ‘Road Warriors’ which is without doubt one of the finest albums of the year, Detroit, Michigan hard rockers Against The Grain destroyed every stage they stepped on in 2015 and blew away every other band that shared these stages with them. Inspired by the likes of Motörhead, Nashville Pussy, High On Fire and The Sword, and fueled by a real, wholehearted, honest Motor City rock spirit that has given us so many legends throughout the history of the genre, Against The Grain are setting the world afire with some high-octane speed rock.

1. Crobot – Pottsville, Pennsylvania rockers Crobot undoubtedly ruled supreme as an emerging band in 2015, touring with bands like Motörhead, Saxon and Anthrax, rocking the Motörboat Cruise, winning new legions of fans and conquering all frontiers they ventured in. With energy levels that know no bounds and musicianship that so simply and effectively strikes just the right cord amongst listeners and audiences, their brand of rock ‘n roll, both in its studio recording and live rendition, is a winner all the way and is well and truly poised to catapult Crobot to becoming one of the biggest bands on the planet in the near future.