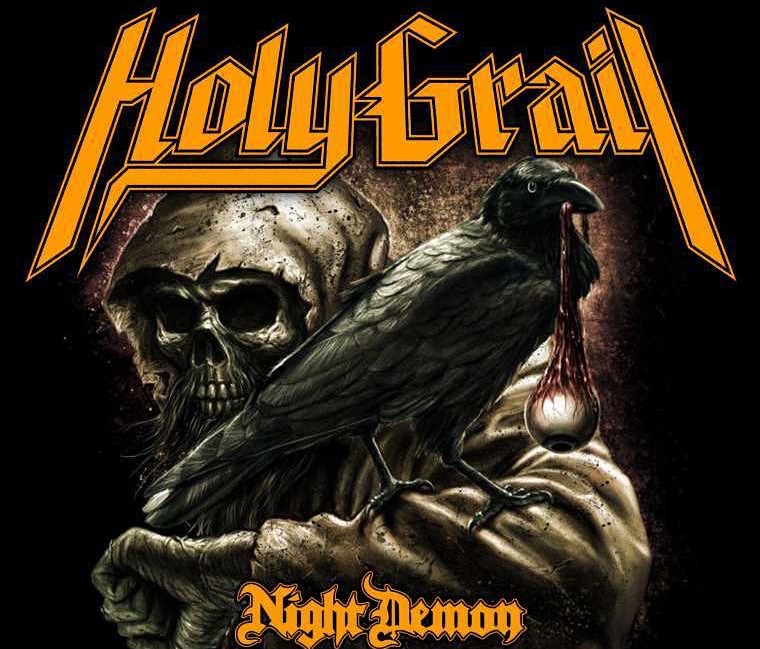 To close out a highly active and successful year of 2015, Night Demon embarked on one final run of US dates as support act for Los Angeles metal warriors Holy Grail, and of course, I hopped in the van to accompany them on this short journey, carrying out all the tasks I’ve been handling as part of their crew this year (tour managing, merch, lights, mascot). I stayed busy and prolific in Los Angeles in the four-month period since the last long tour with these guys, but I was certainly looking forward to this tour ever since I was told about it. While I became a huge fan of the bands Night Demon opened for on previous tours, i.e. Raven, Skull Fist and Elm Street, it was only because my liking for those bands grew through those tours. But in the case of Holy Grail, I’ve already been a fan for six years, and they are by far one of my favorite bands, so this tour was a far more exciting prospect for me. They’re one of the first young bands I really got into when I first started going to shows actively, and if not for them I probably wouldn’t have had as much faith in new bands as I do. I’d even go as far as saying I discovered bands like Cauldron and Night Demon because of Holy Grail. The tour promised to bring two of the best young old-school metal bands in front of US audiences, and as a firsthand witness, I bring you some stories and behind-the-scenes insight from the road in this 3-part tour blog. Here’s Part 1:

All four of us are so used to the tour life, it comes as second nature, and I think I speak for everyone in this band when I say that being on tour is better than staying home. So, the first day is always fun, getting back to what we now define as ‘normal’. But the pre-tour preparation is invariably stressful and hectic, trying to make sure that we don’t forget any of the million things we have to take care of before leaving. As a result, it was almost noon by the time the guys departed Ventura on Friday December 4th and picked me up in LA an hour later, to head to Scottsdale, Arizona for the first show of the tour at Pub Rock Live. Arizona does not set its clock back for Daylight Savings, so we were going to lose an hour too. We arrived at the venue at 8:30 local time, and with our set time scheduled for 9:30, it needed to be our fastest load-in and setup ever.

It was slightly chaotic to say the least, and with the number of t-shirt designs we have this time, there was nearly not enough room for me in the merch area. But I dealt with it the best I could, and focused on getting the lights set up on stage instead. By 9:30, we were more than ready to go, and ended up doing a set two songs shorter than what was discussed as the tour set list. The intro sample for ‘The Chalice’ has been missing from the sampler for a while now, so I usually put on my mask and gloves to be in full costume during the intro for ‘The Howling Man’. But that song wasn’t played in this set either, so I did it during ‘Curse Of The Damned’ instead and wore the full costume for two whole songs while doing lights before ‘The Chalice’ as a result. Good thing the weather was cool, but that’s a lot of layers. Plus, I didn’t have the best time on stage as ‘Rocky’, as Dustin’s drumkit was set up in front of the riser which already had Holy Grail’s kit on it, leaving me hardly any space to move about.

But overall, this was hands down the best crowd Night Demon has ever had in Arizona, both in terms of turnout and response. The applause between songs was pleasantly loud. Arizona has been a tough market for the band but we never give up, and this show once again proved that there is a great crowd waiting in just about every town, and it’s only a matter of time before you experience it.

The merch area was directly facing the stage, so I got to see the entire Holy Grail set and it was great to finally witness how a crowd outside the LA area responds to their show. They played a long set, got a well-deserved encore, and along with the new material and staples from the two full-length albums, they included songs they hadn’t done in a very long time, like ‘Rains Of Sorrow’ and their cover of Accept’s ‘Fast As A Shark’. I am thrilled at the prospect of seeing this band every night on this tour, and I’ll be sure to nag them to include more rarities in the set as well.

It was strange to have a day off after the first show, and even more so to have it on a Saturday. But it was our only day off on this run, so we laid low and got as much rest as possible before heading out of Arizona on Sunday morning for the 8-hour drive to Albuquerque, New Mexico for a show at Sister Bar, this time thankfully with no time zone change to account for. Of course, when asked for the destination by the navigation app, the answer was obvious: Frontier Restaurant. We’ve enjoyed the amazing Green Chile Stew at this place without fail on the last three tours, and this was going to be no exception. We arrived at Frontier at 3:20, with the perfect amount of time to get our fix before the 4 PM load-in time at Sister Bar which is located in the same area.

The pre-show ritual here was completely contrasting to that of the Scottsdale show. We got there on time, before Holy Grail, I had all kinds of room to work with in the gigantic merch area and we had ample time to load the gear in. I spent the next three hours doing inventory count and re-organizing the stock. The limited edition holiday special design is available as both shirt and sweatshirt, and has already been attracting everyone’s attention, but we have as many as six shirt designs in total this time, along with four different patches and the heavy metal mixtape. There is more than enough at the Night Demon merch table to compel people to make a purchase, and it keeps me busy, but I love it, as there is nothing worse than sitting idle at the merch table.

The venue staff was very welcoming and accommodating towards both bands, providing us with buyouts for food which doesn’t happen as often as it should. The drink tickets they gave us were good for nearly everything on the beer menu, and drinking legit high-alcohol beer off of these tickets once again reminded me just how much cheaper bar drinks are as soon as you step outside of California. I also tried the Vegan Frito Pie from their kitchen menu and it was fantastic. Everything had been smooth so far and we were in good spirits for the show itself, and the Night Demon set turned out to be a very positive experience. The band is sounding great, the lights are looking good, and this time we got to do the full 9-song set. I could hear people screaming and whistling every time I hit the strobe button on my lighting console. We always get Albuquerque on a Sunday for whatever reason, but the die-hards always come out and the band’s fan-base grows every time.

People lined up at the merch as soon as the set ended, and looked blown away by the performance. Fans/friends were buying me beers throughout the remainder of the evneing. One person came up to me and recognized me as ‘Metal Assault!’ which is always a good feeling. Holy Grail played a slightly different set from the previous show as well, although they didn’t do ‘No Presents For Christmas’ like they said they would. This was an early show, and good thing it was, as we had a 12-hour overnight drive plus 1-hour time change to Austin, Texas ahead of us. Dustin, handling all the driving as always, was went to sleep in the van straight after the Night Demon set to prepare for the long drive. Besides the driving he also packs the back of the van during load-out every night as he knows exactly where everything goes and with the amount of things we fit in there, it sure is a game of tetris. But I had to pack the merch without his help this time. I have no idea how I pulled it off, and the only explanation is, drunk load-out is best load-out. 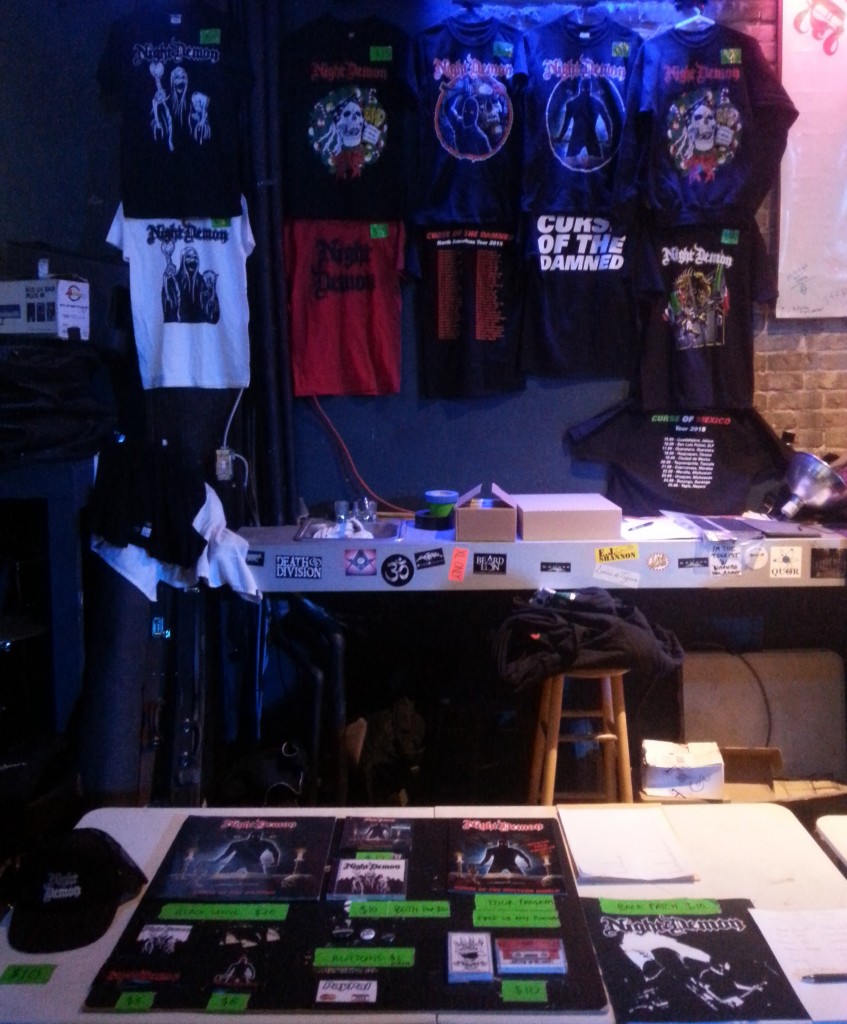 With no day off between Albuquerque and Austin, we had a very long overnight drive, so we hit the road straight after load-out in ABQ, and traveling the long distance through multiple refueling stoppages, we arrived in Austin at 4:30 PM Central Time. It was definitely the longest drive we’ve ever had between two shows, and it felt like it would never end. But Austin has always been great to Night Demon, so we knew it was going to be worth the effort. After freshening up, we made our way to the Dirty Dog Bar to load in and set up, and with four local openers before us, there was no real rush but it was good to get all the pre-show rituals squared away early. Except for the Night Demon set during which I do lights, I never leave the merch table, so the guys bring me food if they go out to eat. This time they went to a place called Chupacabra and brought me a ‘West Coast’ style chicken burrito which I had picked from the menu, and considering our high standards for Mexican food, this burrito was surprisingly excellent. The turnout here for the show was equally excellent, and it kept building up through the evening. The assortment of local talent was bizarre to say the least, with the first band playing a cover of Limp Bizkit’s ‘Break Stuff’, and one of the other bands playing without a bassist and trying to sound like ’90s Metallica, ending with a sloppy cover of ‘Creeping Death’. Finally at 10:15, it was our turn, and the set went really well, probably better than the last two shows, as Rocky got a better response from this crowd too. Holy Grail also upped their game, I felt, and ‘No Presents For Christmas’ was indeed played on this occasion.

Besides the turnout, this was also the best day of the tour so far weather-wise and it felt at least 20 degrees warmer than Albuquerque. We went through some rough weather on the October-November tour last year and thought it would be worse in the month of December, but knock on wood, it has been mild up till now. The longest drive of the tour is about to be followed by the shortest one as we head to Dallas next, and I’ll bring you all the scoop from that show and a few others after it in the next part of the Heavy Metal Utopia tour blog. Until then, follow me on the Metal Assault social networks to keep tab on my activities through this tour. 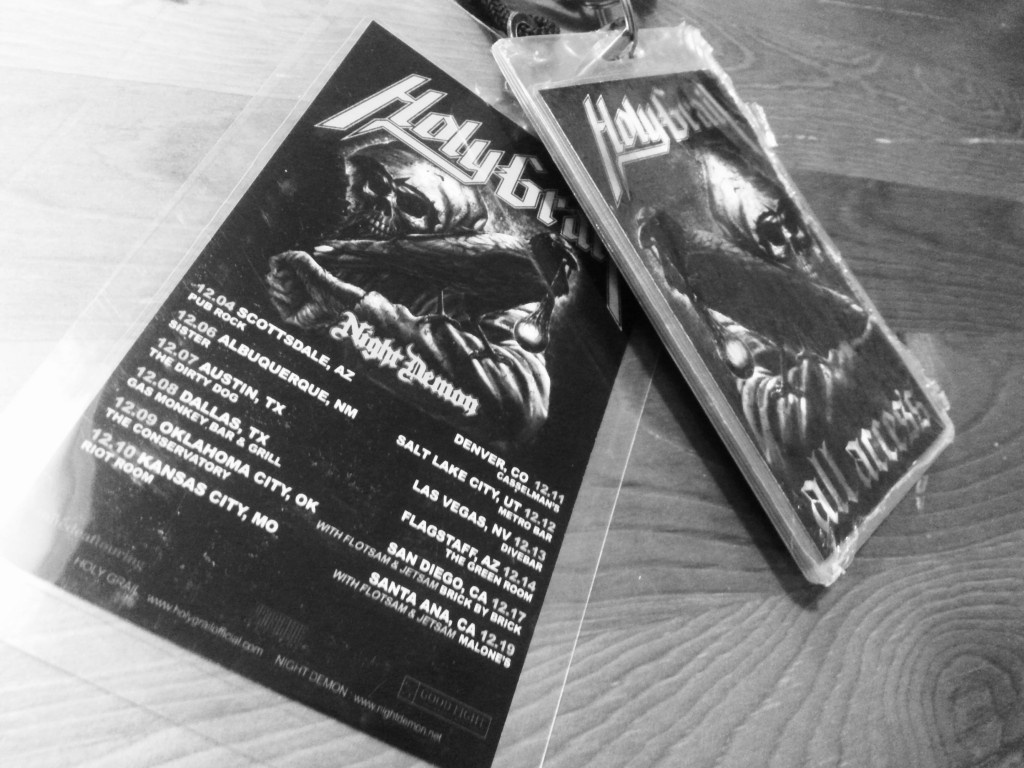