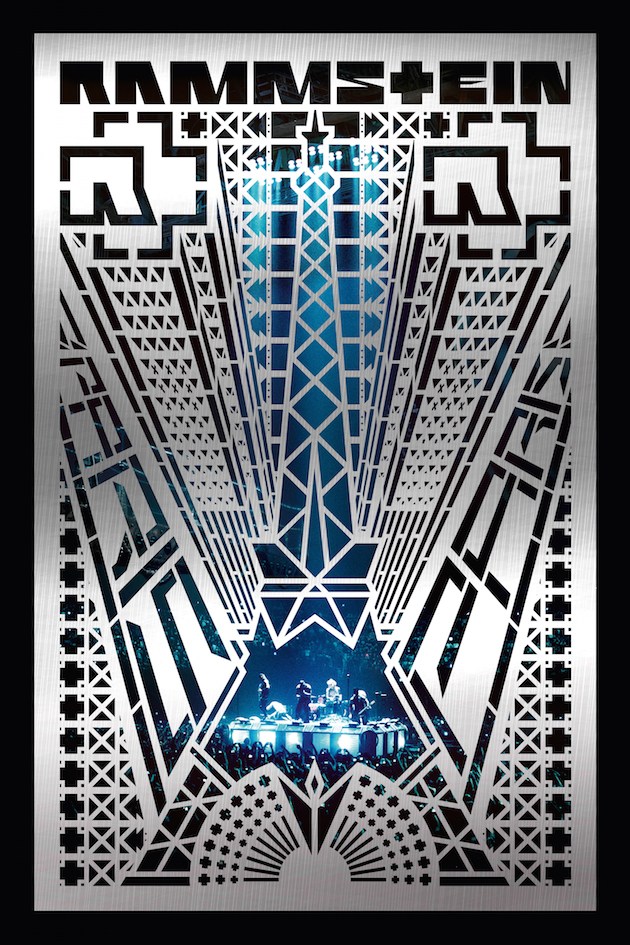 In an age of hi-resolution cellphone cameras and low-quality YouTube uploads, the production of elaborate, professionally shot concert films has decreased quite noticeably, as concert-going humans can now not only record and upload their own personal concert videos but can also easily broadcast them live to their own audience at the tap of a touch screen. Understandably, lesser number of bands are investing in full-on concert films, and many in the heavy metal realm simply purchase footage from music festivals and release them as is without adding any perspectives or flavors unique to the band. Enter Rammstein. Following their previous four concert films ‘Live aus Berlin’ (1999), ‘Lichtspielhaus’ (2003), ‘Völkerball’ (2006) and ‘Rammstein in Amerika’ (2015), the German industrial metal group is back with another breathtakingly spectacular video project. ‘Rammstein: Paris’ is set for release on DVD, CD and Blu-Ray via Spinefarm Records on May 19th, and opened to theatrical screenings worldwide this week, as the first Los Angeles screening was held at the Downtown Independent last night, Thursday March 23rd.

Filmed through two sold-out concerts at the 17000-capacity Palais Omnisports Arena in Paris in 2012, ‘Rammstein: Paris’ is the creation of Swedish director Jonas Åkerlund, who has worked with the likes of Blink-182, Satyricon, Madonna and Lady Gaga, but to capture and do full justice to the visual scope of a Rammstein concert is no mean feat, and Åkerlund has surely outdone all his past efforts with this one. The film presents an expansive assortment camera angles perspectives, many of which are strange, unique and abnormal to this genre.

It is clear from the get-go that the band left no stone unturned in making this their most state-of-the-art concert film till date, and were on a mission to set the modern standard in this realm. ‘Rammstein: Paris’ showcases the band’s ultra-massive stage production, and the film achieves the seemingly insurmountable task of capturing and detailing all of it. It would have taken a nearly unlimited budget to produce a concert and film of this magnitude, but as attendees at last night’s screening would agree, it’s going to turn out to be well worth the investment for the band because this is a film certain to be universally enjoyed by one and all.

From the epic intro through all of the band’s hit songs and the grand farewell at the end, ‘Rammstein: Paris’ presents the band in full glory, sonically and visually, and director Åkerlund puts his touch on it with the use of shocking, contrasting, and at times confusing style of video editing in the transitions between frames, scenes and angles, which is most definitely deliberate and by no means an editing oversight or flaw, even though it might appear so at first.

The band’s performance is, as expected, top-notch, while the stage production is taken to new levels, specially in the pyrotechnics, a signature element of the Rammstein live concert experience. The Paris fans respond fully to the band, and majorly contribute towards some spine-chilling moments during the film. The set list of songs is a perfect encapsulation of their best work over their two-decade existence, although the abridged theatrical version does not show all 22 songs that constitute the DVD/CD/Blu-Ray release. Given some of the lyrical themes and song titles, of course this film has to be categorized as NSFW/Parental Guidance, and to that effect, it was hilarious and endearing to see a woman escorting her little daughter out of the theatre in Los Angeles last night during the songs ‘Buck Dich’ and ‘Pussy’. Bringing your kids to a Rammstein film but knowing what parts to let them consume is indeed good parenting.

Liking or disliking Rammstein’s music is simply a matter of opinion and no one is factually right or wrong about it, but there is no doubt their live show is a visual spectacle like no other, and concert films like ‘Rammstein: Paris’ go a long way towards changing the minds of non-fans and non-believers to make them gravitate towards the band. This is why such releases are important, and one wishes more bands would have the means and desire to invest into this genre. You can have your own low-quality, shaky, noisy personal cellphone video recordings, or you can have a film as epic as ‘Rammstein: Paris’ which you can watch repeatedly and savor for life. Besides the DVD/CD/Blu-Ray formats, if ever there was a concert film worthy of a theatrical release, it’s this one.

Concert organizers and venues can apply all kinds of police-like security measures to prevent people from using their cellphone cameras but it never works to full effect, and the best way to eradicate it is through splendidly presented films like this, the quality and scale of which can only be achieved by the band and their own team.

‘Rammstein: Paris’ is the true mütter of all spectacles, and is packed to the maximum with the power to thrill Rammstein fans and non-fans alike.

To pre-order the DVD, CD or Blu-Ray or find showtime and ticket information for theatrical screenings near you, visit the dedicated ‘Rammstein: Paris’ website, here.