In this week’s ‘From The Archives’, we revisit our interview with original AC/DC bassist Mark Evans. This interview was conducted on September 22nd 2011 and originally posted as audio. During this time, Evans was doing press to promote his autobiography ‘Dirty Deeds – My Life Inside & Outside of AC/DC’. In this interview, he gave us a taste of some of the things he writes about in the book, and we thought you would enjoy reading an excerpt from the in-depth conversation here.

Mark, your book comes out November 11th. It’s the first book by any member of that early AC/DC lineup. Do you think that makes it all the more special?

That’s right! It’s interesting on a couple of levels. As you mentioned, number one, no one from the band has really written a book before. And also, it’s a very important time of the band, and the book takes you right back to very early on in the band’s career. The part that relates to AC/DC and my involvement is just basically when the very first album came out here in Australia, which was early 1975. It was the ‘High Voltage’ album here in Australia, which was slightly different from the international version, a combination of the ‘High Voltage’ and ‘T.N.T.’ albums. But yeah, it takes you right back to the start of the band. When I joined AC/DC, it was very, very early days. We were doing gigs in Melbourne and only 25-30 people were turning up to the gigs. So, it was the formative days of the band, and of course that was the time Bon Scott was with the band too. So, I think the book is interesting on quite a few levels, for fans of AC/DC, and also for people who want to know what it’s like being on the road with a rock n’ roll band. The book is not completely about the AC/DC days, there’s other stuff in there too, but the major part is about AC/DC. I wrote this mainly to pay back all the supporters that have come to the gigs over the years and have always asked what it was like to be in the band. These people have had a very genuine interest in that, so hopefully I’ve been able to give them an insight into the band’s early days with this book.

One thing you talked about in the prologue of the book is that the city of Paris has been an inspiration to creative people because of its atmosphere. You being a person who has traveled everywhere, what other places inspire you in a similar way?

The ones that immediately come to my mind are New York, Paris and London. I lived in New York for quite some time in the ’70s and I’ve been back to visit often. But yeah, outside of my hometown of Sydney, I’d say those three are the ones that have inspired me. They’re just great cities, and particularly with London and Paris, there’s such great history in those towns, the type of European history that dates back a thousand years, at least, and I find it really attractive. And as for New York, you simply can’t go to that town without being absolutely engulfed by it. It’s just a fantastic place. 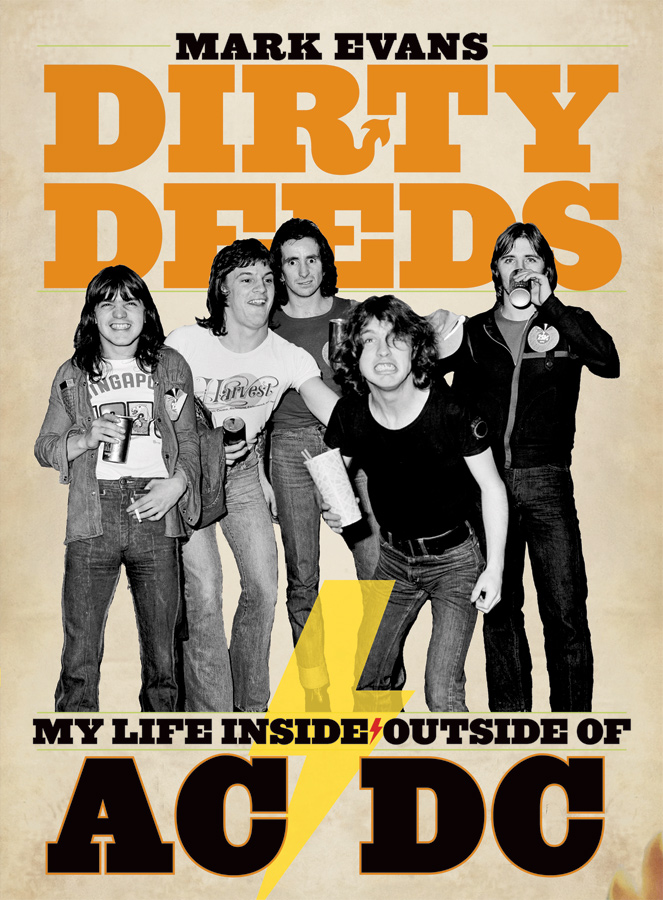 In Chapter 6 of the book, you mentioned that only three songs from the ‘Dirty Deeds Done Dirt Cheap’ album, the title track, ‘Problem Child’ and ‘Jailbreak’, actually made it into the live set on a regular basis. In your opinion, why were the other songs neglected? There are some great hidden gems on that album.

Oh, I love the album! I’ve always thought it’s a great record. But the main reason for that was, at that stage of the band’s career, we were pretty much based in the UK and Europe because we were touring so extensively there. We did proper support tours with Ritchie Blackmore’s Rainbow and then with Black Sabbath. When you go out touring in Europe, having Bon Scott and Ozzy Osbourne leading the band, it can lead to very interesting nights out, you know (laughs). But what happened was, we were probably doing only 25-30 minutes a night, and all we were promoting was ‘Dirty Deeds’, which at the time was the new album. We just basically didn’t have a lot of time. We started off playing a song called ‘Livewire’ and then finish with ‘Baby Please Don’t Go’. So, in the core of the set, we were only left with at best 20 minutes to play a few other songs. So, a lot of songs from ‘Dirty Deeds’ couldn’t be played simply out of necessity and time limitations.

The thing that struck me about this book is, it’s very honest. You’ve clearly talked about things you liked and didn’t like. In that sense, do you feel that autobiographies are better than somebody else’s account?

Yeah you see, one of the motivations of writing ‘Dirty Deeds’ was, a lot of times people would tell me about or give me AC/DC books, and there’s been a lot of books written about the band, obviously, but I’d read these books and even though sometimes I thought it was pretty good, most of the time I’d be reading it and thinking they were talking about another band! No one really captured what it was like. They’d be relying on secondhand views or repeating what was in other books, or interviewing someone that knew the band. So, it was getting filtered through a couple of people that were around the band. One of the main reasons I wanted to write the book is put the people that are interested in the band, inside the band, to indicate to them exactly what happened. With other books, I don’t think they were purposely inaccurate, of course, no one would do that. But no one really captured the character of the band or the people in the band.

Have you received any feedback for this book from the other members of AC/DC, from back in that lineup or the current lineup?

Not at all, actually. We don’t have any relationship at all. I haven’t had any contact with the band for quite a number of years now. We’re obviously in very, very different circles. I wouldn’t expect to have any feedback from the band. I would be very happy if any of the guys chose to read the book, and if so, I would hope it brings them some great memories for them, because we had some great times. We did a lot of work, but I’ve got to tell you, we were very tight as a unit. But there was a whole news story about the book on the front page of the band’s official website, and that’s the only indication that they know about the book. Certainly nothing from anyone inside the band personally.

One great line in the book is, “Every member of AC/DC had a different personality.” Do you think that quality was instrumental in the band’s early success, the combination of these different people?

Oh yeah, definitely. We were all different but what united us was a common cause. Except for Angus and Malcolm being brothers, I don’t think any of us would have had a lot to do with each other had we not been in the same band together. We were in the only band we ever wanted to be at that stage, and that band had a very, very strong team mentality. We didn’t have a lot of respect for any other bands (laughs), there was certainly quite a lot of arrogance about the band back then. I wouldn’t have thought that would have changed much over the years. The different personalities became part of the band, and once you were in it for the good or the bad, you did tend to lose yourself a little bit. It wasn’t necessarily for yourself. You were there to be part of the band and you had to committed 1000 per cent. Part of the issue that led to me getting sacked was that I probably wasn’t as committed. I never really saw that, but I think we’ll have to agree to disagree on that point even now. But with Angus and Malcolm, they were put on this earth to be in AC/DC. They had a great vision of what they wanted the band to be. They were so ultimately committed to what they were doing for that cause, I don’t think anyone’s commitment could be as high as theirs. But those guys have done an amazing job with the band and I’ve got nothing but respect for their work ethic and for them as musicians.

If you’re interested, you can listen to the entire 33-minute interview here.