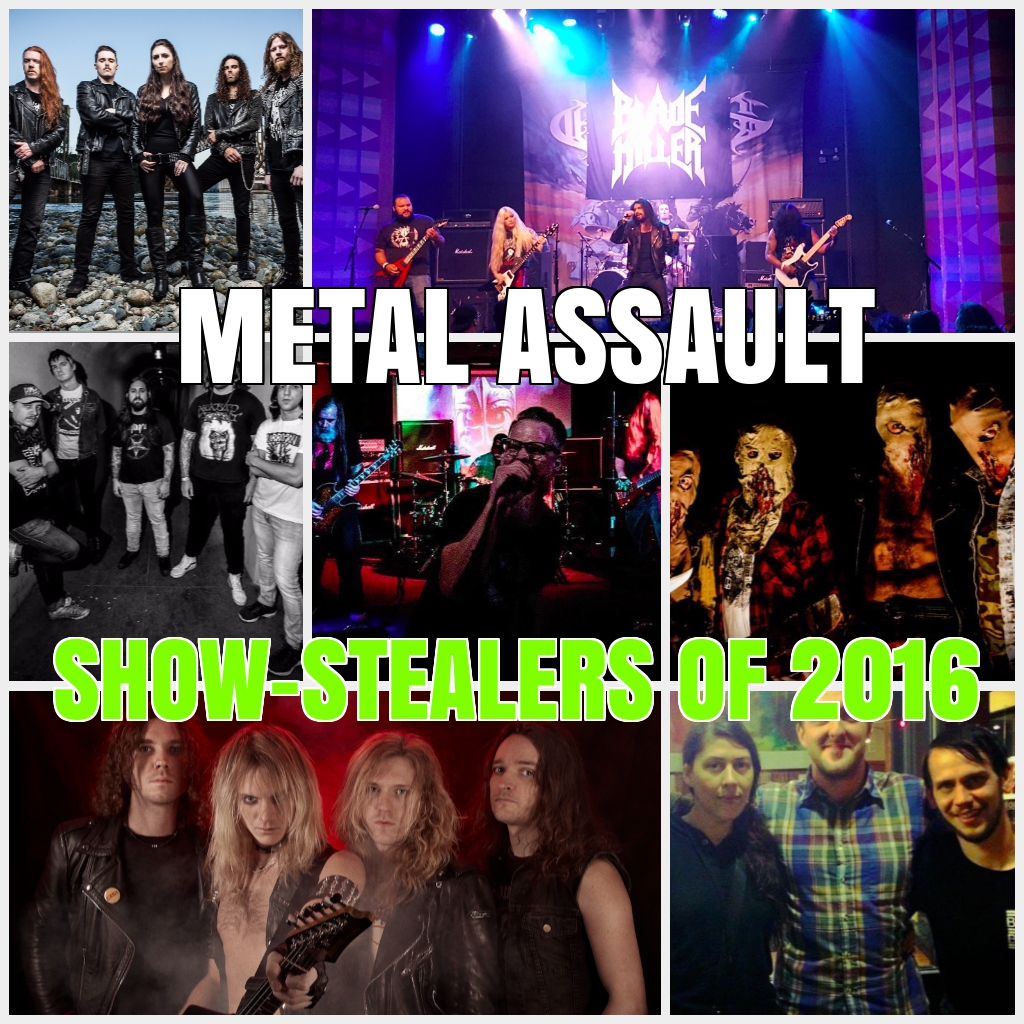 Around this time of the year we celebrate the best albums, shows and new bands of the 12 months gone by, but also equally deserving of the recognition are bands that not only played in front of audiences that were in attendance to see someone else, but ended up superseding the efforts of their respective headliners and stealing the show. I witnessed many such instances in 2016, as the habit of going to shows early enough to catch all bands on the lineup (and never caring or asking for set times) is deeply ingrained in me. Here are the seven best show-stealers of the year, in chronological order.

Yidhra (supporting Conan & Serial Hawk) @ Complex, Glendale CA 3/20: Los Angeles based stoner doom masters Yidhra have often served as the ideal local opening act for national and international bands coming through town, but on this occasion, Yidhra stood out as the best band of the show, by far, as they were in fact the only band to showcase any kind of musicality and structure to their heaviness, while the other two bands were busy turning it up as loud as they could and shaking the foundations of the venue but failing to make anywhere near as much of an impact as Yidhra did early on in the evening. Los Angeles is lucky to claim Yidhra as a “local band”, as they showed here that they’re very much on par and in some cases better than bands from afar.

Unleash The Archers (supporting Anvil) @ Pub Rock, Scottsdale AZ 6/4: Hailing from Vancouver BC, female-fronted melodic death/power metal band Unleash The Archers opened for Anvil this year, and UTA outclassed their fellow Canadians by quite some margin, as anyone and everyone who saw the two bands on this tour was left wondering why it wasn’t the other way round, and why UTA did not headline instead. They’re the better band and they drew a much larger audience to the shows by themselves. Led by the soaring vocal highs and compelling stage presence of Brittney Slayes and well backed by the skillfully crafted musicianship of her band mates. After UTA’s spectacular set, there was no hope in hell for Anvil.

He Whose Ox Is Gored (supporting Ghost Bath & Underling) @ Complex, Glendale CA 7/15: Seattle-based progressive sludge/doom/post-rock group He Whose Ox Is Gored opened this show, at a venue they’ve headlined in the past, and with seemingly minimum effort but maximum output, they easily turned out to be the most dynamic and memorable band of this event. They created quite the atmosphere with their dark, tense, psychedelic passages and established a strong grip on a visibly stunned audience early in their set. They only went from strength to strength with each song, showcasing all of their repertoire within the short time allotted to them, and made a long-lasting impression, much more so than the bands that followed. He Whose Ox Is Gored left this audience floored.

Ghoul (supporting Carcass & Crowbar) @ The Roxy, West Hollywood CA 7/24: Northern California crossover thrash marauders Ghoul have been known to take no prisoners and leave nothing but sheer devastation in their wake, and this being another instance wherein a band that previously headlined a venue returned as an opening act, Ghoul showed why they’re one of the most entertaining live bands in existence, and neither Carcass nor Crowbar were able to come close to matching them. Obviously playing a shorter set than they would as a headline act, Ghoul packed the intensity and theatricality of a full set into the 30 minutes they got here at the Roxy. Fast and deadly precise tunes accompanied by humorous gore theater and lots of stage blood instigated non-stop circle pits and left the crowd wanting more from Ghoul, and made the following two bands’ sets feel like yawnfests in comparison.