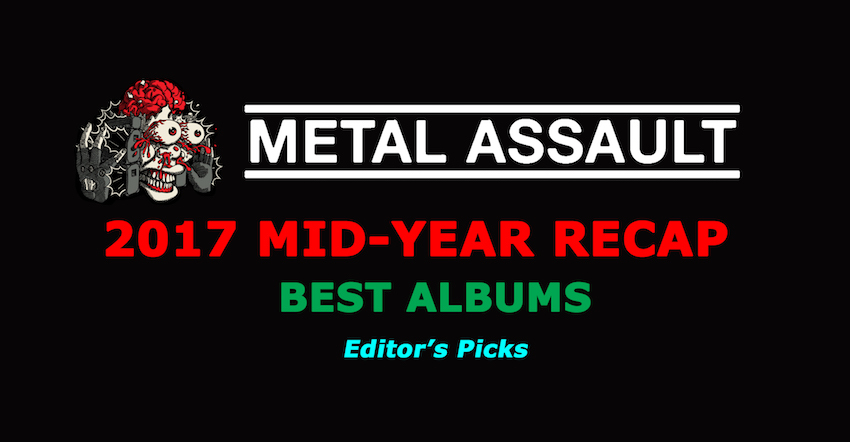 It is that time of the year again, time for our mid-year recap of the best album releases so far. Year after year it’s proven that great new music is easily accessible to those who want to give it a chance, and 2017 is no different, as we’ve already seen some fantastic releases in metal. As usual, the selection criteria for this list is full-length studio albums of all new material only (no EPs, live albums, compilations, reissues and re-releases). Without further ado, here are the editor’s picks for the top 20 albums released between January 1st and June 30th 2017. (Also check out our Staff Picks article).

#20. Lecherous Gaze – One Fifteen: Oakland, California psychedelic hard rock / proto-punk outfit Lecherous Gaze started out in 2010 and had already garnered the admiration of the heavy music underground with their first two full-length albums, other releases and insane live performances, but they’ve really outdone themselves with their third LP ‘One Fifteen’, striking the right chord with ultra-trippy psychedelic jams boasting smooth flowing guitar work, raspy vocals and crafty rhythm fills. This part punk, part psych masterpiece has absolutely no dull moments, and is a trip worth taking.

#19. The Drip – The Haunting Fear of Inevitability: Following three EP releases, Richland, Washington grindcore quintet The Drip marked their tenth year as a band in 2017 with the release of the long overdue first full-length, ‘The Haunting Fear of Inevitability’. “Crushing” would be an inadequate description, because 13-track, 31-minute monster is beyond that. This album would make grindcore legends such as Napalm Death and Terrorizer extremely proud of what they’ve inspired, because The Drip has taken that influence and evolved the genre into an unrelenting yet dynamic art form that retains its old-school values but stands strong in the modern-day. Breakneck fast grindcore meets ominous extreme metal and dark melodies, as The Drip put forth a fantastic debut LP that truly makes for an apt soundtrack to the inevitable apocalypse.

#18. Walpyrgus – Walpyrgus Nights: Raleigh, North Carolina traditional metal group Walpyrgus was formed in 2012 but comprises musicians who have played (or are still playing) in well-established bands in their area for several years, While Heaven Wept, Twisted Tower Dire and October 31 to name a few. They brought great pedigree to this new band and created an entity that deserves recognition far beyond their home territory. They kept teasing fans with singles and live albums through the past three years, but their first full-length studio release ‘Walpyrgus Nights’ finally arrived in 2017, and has come as a breath of fresh air for fans of Thin Lizzy/NWOBHM-inspired old-school metal. Guitar harmonies, soaring clean vocals, galloping rhythms, blazing solos, catchy choruses. ‘Walyrgus Nights’ is nothing less than an instant classic.

#17. Grand Lord High Master – Self-Titled: In their mere two-year existence thus far, Los Angeles based hardcore/sludge/thrash/psych/noise quartet Grand Lord High Master has captivated hometown audiences with their mind-numbing weirdness, and after honing their craft through countless live performances, they emerged with their self-titled debut full-length in 2017. This band has clearly left no stone unturned in expressing themselves to the fullest in these 53 minutes of sheer sonic madness, but as wild and violent they sound, there is method behind the mayhem. Passages of destructive brute force are intertwined with moments of delightful finesse. Influenced in equal parts by bands like Refused, genres like jazz fusion, and everything in between, the 14 tracks on Grand Lord High Master’s self-titled LP spin the same sonic thread but differ so vastly from each other, the album as a whole reaches jaw-dropping levels of dynamism, and marks a stunning debut.

#16. Crystal Fairy- Self-Titled: Formed in 2016, Crystal Fairy was purely a result of an on-stage jam between the Melvins and Le Butcherettes when the two bands toured together. Buzz Osborne (guitar) and Dale Crover (drums) joined forces with Teri Gender Bender (vocals, guitar, keyboards), and the Crystal Fairy dream team was complete when Omar Rodriguez Lopez (At The Drive In) entered as bassist. The band’s self-titled debut surfaced in early 2017, and smashes every negative connotation surrounding the word “supergroup”. This somewhat unlikely, unexpected combination has succeeded in creating a sonically perfect album that is impossible to dislike, and constitutes some of the best work each of these musicians has done till date, even when pitted against their illustrious careers. Please do not let this be a one-off, please do not let the Crystal Fairy vanish.