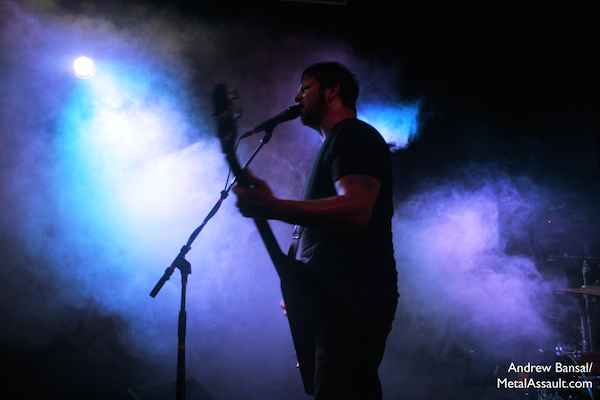 The last installment of my ‘On The Road With Night Demon’ tour blog took you through our adventurous week in the rainy North-West, and in this part I’ll bring you up to speed with the trials and tribulations of Night Demon’s gigs in Boise, Salt Lake City, Denver, St. Louis and Columbus. But before that, read parts 1, 2, 3, 4, 5 and 6 if you haven’t yet.

Following a long drive from Seattle, we arrived at the Shredder in Boise in the early evening, and on the way we received word from Raven that they were still facing issues with their RV and were trying their best to get to Boise. As the support band of the tour, Night Demon were in a difficult position as the risk of making such a long drive to get there and having the show canceled on us due to the headliner’s absence was very much imminent, but thankfully that didn’t happen and despite Raven being unable to make it after all, the show went ahead as scheduled and Night Demon ended up as the eventual headliners, winning some more new fans in the process. The sound was great, and this was the first venue of the tour with its own fog machine and stage floor lights which made it easier for Night Demon to put on their full show, sonically and visually. This is most certainly one venue Night Demon will want to return to on future tours.

After the Boise show we headed on another long drive straight to Salt Lake City, and slept in the van for a few hours on route in bone-chilling temperatures, the most brutal in-van sleeping session of the tour thus far. Getting to Salt Lake City and basking in the blazing sun after a whole week under clouds in the North-West felt absolutely amazing and instilled positive thoughts immediately. We got to the Lo-Fi Cafe for the show, and upon our arrival, John Gallagher approached me and asked me to handle merch duties for Raven, as their guy had to stay back in Washington to get the RV fixed and they had traveled in a rented mini-van with just guitars and drums to play this show. I was expecting this predicament to be a possibility and was mentally prepared, but actually handling merch for both bands was quite a challenge, and even though things turned quite chaotic, I think I scrambled through it successfully.

Meanwhile, the Night Demon guys were definitely feeling the effects of playing 13 shows in a row and were slightly burned, which is only natural and human. The most to suffer from it was Jarvis, as his voice had all but disappeared completely by this point. But, through a frantic hot water and beverage laden medication he was able to pull it off and deliver a good show and play the usual 35-minute set for the Salt Lake City audience which showed its appreciation for Night Demon, and couldn’t possibly have been able to guess that Jarvis’ voice was hurting all the while he was on stage.

Metal Blade recording artist Visigoth were the local opener for the show, and put on quite an impressive display of pristine heavy metal themselves, shining as possibly the best opening band we’ve seen on this tour. Seeing and hearing them play, and observing their local fan-following at this venue leaves no one in doubt about their signing to the Metal Blade label and they clearly have a bright future ahead.

On an insane journey starting in San Bernardino on October 22nd, we had finally reached Denver, Colorado for the last in the run of 15 consecutive shows before a much-needed off-day on November 6th. The drive to Denver was rewarding as Dustin and I were able to witness a beautiful sunset on one side and a full moon on the other at the same time. 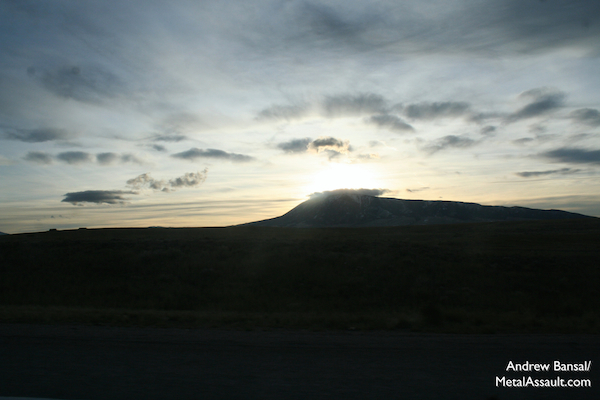 The Salt Lake City show left Jarvis’ voice more strained than ever before and he was barely talking at all on the way to Denver, giving more than 100 per cent effort to save it for the show. He was even dreading the prospect of Night Demon playing an all-instrumental show at the 3 Kings Tavern, but it didn’t come to that and he toiled through it once again. John Gallagher impulsively walked up on stage to sing along one of the chorus lines in ‘Curse Of The Damned’, a truly heart-warming moment (which I failed to capture on camera as I wasn’t ready for it, unfortunately).

I was pulling double duty at the merch table once again as Raven’s merch dude was still not with them, but I was much better prepared to handle it on this occasion. The vibe at the venue was welcoming and there was a decent crowd, most noticeably decorated with a greater percentage of pleasant-looking females than anywhere else on this tour so far.

The guys were well-rested, thanks to the off-day, and geared up for the longest drive of the tour from Denver to St. Louis. Fuel stoppages included, it took us a total of 14 hours, of which Dustin drove a whopping 9 hours non-stop, to reach the Fubar in St. Louis in the early afternoon on the 7th. We loaded in and set up for the show at 6 PM. Jarvis was still suffering vocally, wasn’t talking in the van, and yet again we faced the possibility of an instrumental Night Demon set. This time, he even asked the local opener October 31 to switch slots and play after Night Demon, purely because he felt he wasn’t physically capable of delivering his 100 per cent at this show and would rather have the local band take over as main support. Even though I was completely able to understand the position he was in, I personally had no doubt in my mind that he would in fact sing the vocals once he got up on stage, because knowing him for the past year and seeing Night Demon so many times in concert, it’s clear to me that they leave no stone unturned in giving their best to an audience on any given night. They’re in it to win it, and they sure did so here in St. Louis. I was kept extremely busy at the merch table as a new horde of Night Demon converts were lining up to make purchases and subsequently get their CDs, LPs and posters signed by the band. 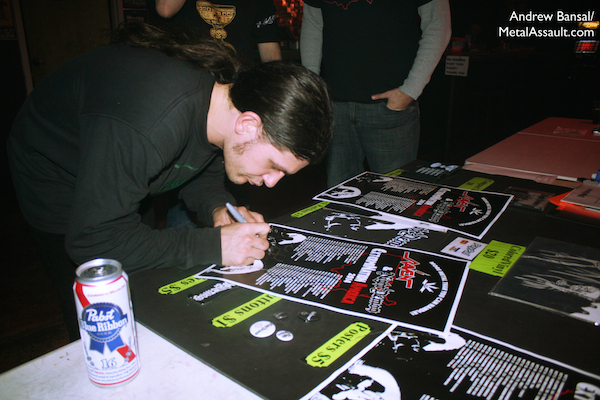 The most entertaining moment of the set was Jarvis remembering to call out a fan who’d labeled Night Demon a Diamond Head ripoff on the internet and dedicating the ‘Lightning To The Nations’ cover to him. Besides, Indiana-based band Stone Magnum played just before Night Demon and put on quite a good show laden with righteous stoner doom metal. Judging by its past and upcoming concert listing, the Fubar seemed like a properly legit metal venue with plenty of good shows coming through it. Reading, Pennsylvania’s promising extreme metal outfit Rivers Of Nihil headlined the venue’s other room the same night. It was nice to talk to some of their members before the show, and I’ve realized that running into people you know in a town that neither you nor they call home is one of the unique and most rewarding aspects of heavy metal touring.

Having amassed six weeks of this tour already, I feel like I’ve formed an indelible bond with all three Night Demon guys, and Dustin has started introducing me to people as the ‘fourth member’ which is certainly better to hear than ‘merch guy’. I have identified common interests and personality traits with each of them, like with Brent it’s our affinity towards cola drinks, with Jarvis it’s all things Megadeth and fear of cats, and with Dustin it’s obviously glam rock.

By this day, Jarvis was able to fully recover his voice, but in the best interests of the band for the rest of the tour, he decided that he will not be doing any more Joe Hasselvander impressions and will not be singing any more Raven songs in the van, sadly. Aside from the performance time on stage and all the pre-show and post-show activities, Jarvis is all-business 24/7. When he’s not getting click baited into reading articles on sensationalist news sites and not watching Bollywood dance videos on YouTube, he’s always switched on and as a person who strives to be as productive as humanly possible, it’s inspiring to observe. 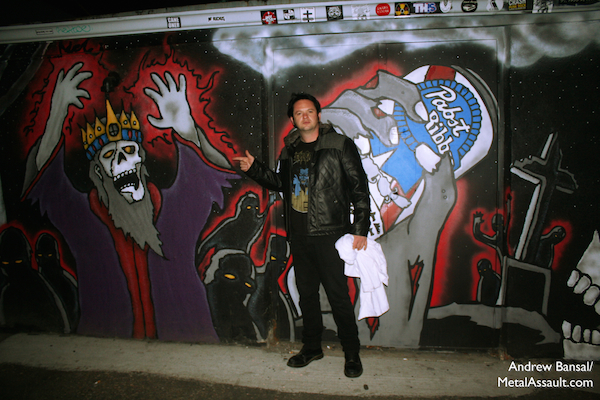 As we crossed the state line into Ohio, I was reminded of the best song about state lines written in recent times, by Gypsyhawk. The show in Columbus was at the Shrunken Head, and being a Sunday evening it rightly started at 7 PM with Indiana-based band Zephaniah scorching up the stage with a great set of prog-power metal. Night Demon sounded extremely loud in that tiny bar and in front of an audience that almost solely comprised Raven fans who weren’t familiar with Night Demon, they turned some heads as was evident from the constant crowd at the merch table after the set. The merch area in the venue was set up such that people would have to go through it on their way in and out of the place, which was absolutely ideal, and the food catered to us was top-notch as well.

But because the show ended as early as 10:45 PM, the evening was far from over. After packing the van, we went to a bar called Ace Of Cups down the street for some after-hours entertainment, at the suggestion of the bartenders at the Shrunken Head. Ace Of Cups were having a Sunday night karaoke thing, and the prospect of drunk folks singing bad karaoke seemed promising at first but the predominantly hipster crowd kept choosing the most depressing songs on earth which was no fun at all. For us though, it was worth the hang in the end because Jarvis went up to deliver quite an excellent rendition of Marvin Gaye’s ‘Sexual Healing’ which blew all the competition out of the water and perfectly capped off a great day for all of us. 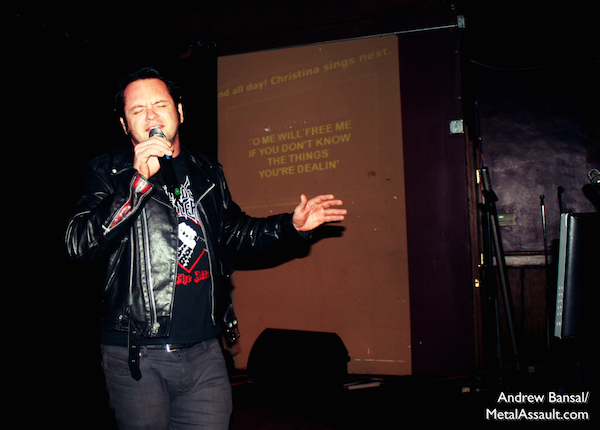 We now have a few days of down time before we begin another brutal run of 13 consecutive shows towards the home stretch of this tour, and I’ll bring you some of that madness in the next part of the blog.