The previous installment of my ‘On The Road With Night Demon’ tour blog concluded on the morning of the Mesa AZ show on October 15th, and in Part 4 I’ll take you through the events in Arizona, Las Vegas and the first few shows of the Southern California leg of the tour. But read Part 1, 2 and 3 first, if you haven’t yet.

The AZ show was at Club Red in the city of Mesa, but before that there was an in-store signing with both bands at a place called Asylum Records. Unfortunately due to a scheduling conflict between the record store and the venue where doors to the show opened at 6, I had to be at the venue to do merch and wasn’t able to go with the band to Asylum, so I can’t give you a firsthand account of proceedings there, but from what I hear it was a fruitful visit for both bands, and a specially big step for Night Demon to be participating in such an event, to be photographed and framed on the wall of fame amidst other bands and artists that have done signings at Asylum. 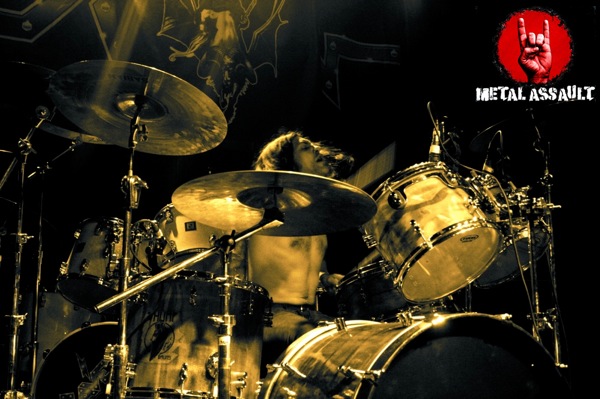 The show itself was another good one for Night Demon, winning over yet more new fans amongst first-time listeners in the audience and as a result the merch was moving. While I sincerely enjoy being the merch guy, some aspects of it are starting to grind my gears, like being asked for directions to the restroom, but people placing their drinks on the Night Demon display board on the table being my pet peeve. There’s simply no way of communicating the message across without sounding arrogant, so I just silently move their drinks to the side. But it gets out of hand when I’m busy reaching for a merch item or with purchasers and not looking at the table. I’d like to think that there’s still a semblance of intelligence left in humanity to be able to understand on its own without a giant ‘NO DRINKS’ sign that placing drinks on the board is rude and risks damage to the items on display, but here’s my request to everyone coming out to the remaining 30+ shows of the tour. No drinks on the display board, please!

After the show we set out for Ventura as the band decided that they wanted to spend the off day on the 16th in their homes and would drive back and forth for all the Southern California shows coming up. The guys looked thrilled to be in their hometown and enjoyed a welcome day off in fine SoCal weather.

We left for San Marcos for the show at the Jumping Turtle, well in time at around 1:30 PM, but it took us five whole hours to get there, treading through at least 10 different ‘freeways’ in an attempt to beat traffic but running into traffic everywhere anyway. We got to the Jumping Turtle after this unexpectedly tiring drive, and the first thing I noticed at the venue were the two classic tour posters on one of its walls, the Judas Priest ‘Defenders Of The Faith’ tour of 1984 with Ted Nugent as the opening act, and Van Halen opening for AC/DC in the late 70s. One of the local openers at this show was the San Diego-based power metal band Cage who put on a good show but the singer’s off-stage interaction with Jarvis about the name of their album ‘Ancient Evil’ which is obviously also a Night Demon song title, was hilarious to observe. The pizza the Night Demon guys ordered for us here was tasty but so greasy and heavy that three slices of it (perhaps one too many) left me dozing off behind the merch table later. Night Demon’s performance at the show itself was smooth as silk, although I wasn’t able to enjoy it as much as usual, owing to the pizza effect and also being slightly under stress throughout the evening as I was told there might be a border patrol inspection on the way back to Ventura after the show and I didn’t have my passport on me. 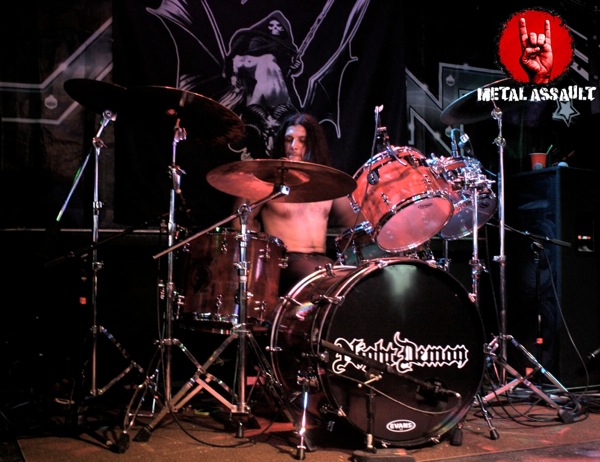 The tour had already taken us through quite an adventurous path up to this point, but the craziest show so far was undoubtedly at the garage in Biko House in Santa Barbara, located near UCSB and attracting a young, energetic crowd as a result. The tiny garage was packed to its capacity and then some, the merch tables had to be set up outside the garage but in its immediate vicinity so I could at least listen to the entire show. Local instrumental stoner band Smoke Wizard started off proceedings with an enjoyable set and they were followed by Orange County-based band Morbid Eclipse who bring together a mix of styles that makes them hard to describe and they put on a fantastic performance in every aspect, easily the best opener I’ve seen on this tour by a fair margin. The uniform studded jackets donned by all four members also gives them that rock ‘n roll element which enables everyone to identify them no matter where they are. When you see these guys as a group, you know it’s Morbid Eclipse, and that’s just great in itself. Taking this already warmed-up crowd under their wing and transcending them to the next level of madness, Night Demon got an excellent response, multiple mosh pits included, and even played the Jaguar cover ‘Axe Crazy’ at the request of Matt Harvey from Exhumed who was in attendance. Raven seemed miffed and confused when they arrived at this venue, and perhaps understandably so, but the place went absolutely nuts during their set which changed their mood at the end of the night to a large extent. In true punk style, the promoter of the event spray-painted Night Demon’s name on the inside wall of the garage as a perfect way to sum up the evening. The show ended at 11, much earlier than the norm for this tour, and some of us went to the In-N-Out joint nearby where we ran into several of the show’s attendees. The metal overload at the restaurant almost made it seem like an Iron Maiden or Slayer show had just concluded in the vicinity. It was also hilarious and awesome to see the Morbid Eclipse squad walk in. Santa Barbara rules!

Next up was a show at the Cheyenne Saloon (soon to be renamed Adrenaline Sports Bar & Grill) in Las Vegas, the same venue where Night Demon played the Doom In June festival earlier this year and the familiarity with the stage and its surroundings certainly propelled the band into delivering the goods that impressed the crowd, some of whom I knew for several years from being a former member of the Metallica fan club. Besides the original songs which are compelling so many people to buy CDs and LPs at every show on this tour, the Riot and Diamond Head covers in the Night Demon set are going down really well amongst crowds, both for the obscurity of the song selection and their execution on stage, but cleverly enough, Jarvis doesn’t announce them as covers and many in the audience perceive these tunes as Night Demon originals. 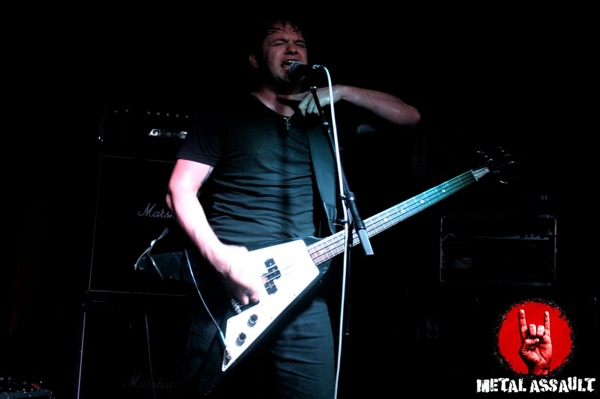 After the show we wanted to get a hotel room in Vegas as the trip back to LA wasn’t long enough to warrant an overnight drive, but even after trying in four different hotels, we couldn’t find a room. They all said ‘sold out’, which was strange because the deserted, funereal atmosphere in Vegas at 4 AM on a Sunday night/Monday morning certainly didn’t seem to imply it. I never thought anyone would ever have trouble getting a room in Las Vegas of all places. But, we faced the facts and headed straight to LA instead, pulling over for a few hours of shuteye in the van along the way.

After the first three weeks on the road with Night Demon, we arrived in Los Angeles. Aside from my India exile of 2012-13, I hadn’t been away from LA for this long and honestly didn’t anticipate how I’d feel being back in town for a day, but as it turned out, my excitement knew no bounds and for me it felt extremely great to be able to have this day in LA in the middle of the tour rather than at the start of it or waiting for it till the end. I’d probably never been happier seeing the marquee at the Whisky, not only because it had the words ‘Night Demon’ in giant letters, but because it was home territory for me. As the merch guy, I have the right to the wi-fi password at every venue that carries it as I need it for the Night Demon credit card reader at the merch table and for other devices, but when I acquired the Whisky’s wi-fi password, it felt strangely exciting as it was perhaps the only thing, living or material, that I did not know at this venue at this point. 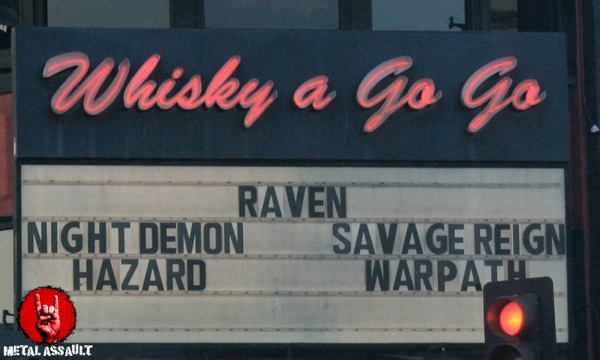 The merch tables here are always upstairs and it required a lot more physical labor loading and unloading the merch setup, but my position up there gave me a great vantage point for the show, more sonically than visually, and it was another aspect of the Whisky I was previously unaware of as I discovered that the sound upstairs is definitely better than on the floor. It was fantastic to see LA friends, musicians and industry folk, including those from Night Demon’s new label Century Media, original Metallica guitarist and Night Demon friend Lloyd Grant, and DJ Will who introduced Raven onto the stage. To me this clearly felt like the biggest show of the tour so far. Both bands only enjoyed some well-deserved and much needed press attention as they did interviews with LA journalists, and reveled in the spotlight on this Whisky stage, the first time here for Night Demon, and surprisingly enough, also for Raven. 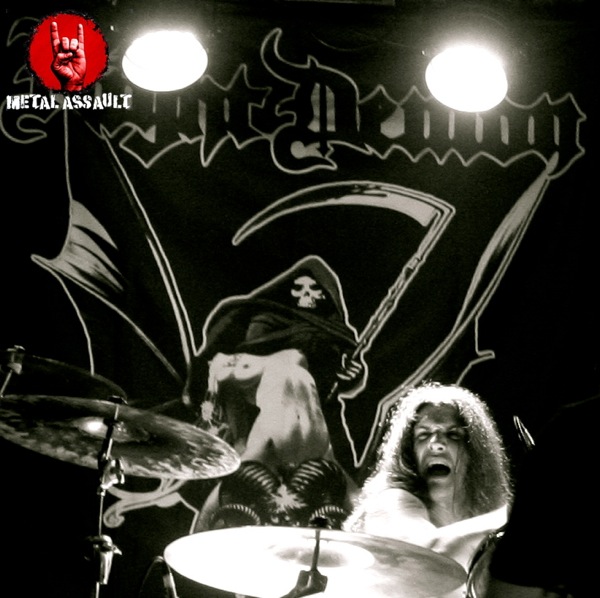 For Night Demon this was an important moment, a showcase event that would tell whether they’re capable of the big stage in such iconic venues, and even though they proved it already at the Wiltern opening for Samhain earlier this year, doing so here at the Whisky in front of the label at the home of rock ‘n roll on the Sunset Strip gives them the inspiration to succeed on the remainder of this long, grueling tour. I thought Raven’s performance was easily the best they’ve given so far on the tour, as finally they got a crowd that gave them the response they deserve. It was a great event for all involved, thanks also to the three local openers Warpath, Hazard and Savage Reign (featuring Erik Kluiber formerly of Gypsyhawk on guitar) each of whom played good sets to warm up the crowd for the touring package. And while we were on the way back to Ventura after the show, Iron Maiden’s ‘Wasted Years’ magically came on the radio, signifying the perfection that was this evening in LA.

Today is another rest day before we begin a run of 15 consecutive shows, the first 6 of them in San Bernardino, Fullerton, Ventura, San Luis Obispo, Sacramento and San Francisco, and I’ll bring you stories from those shows in the next installment of the blog.