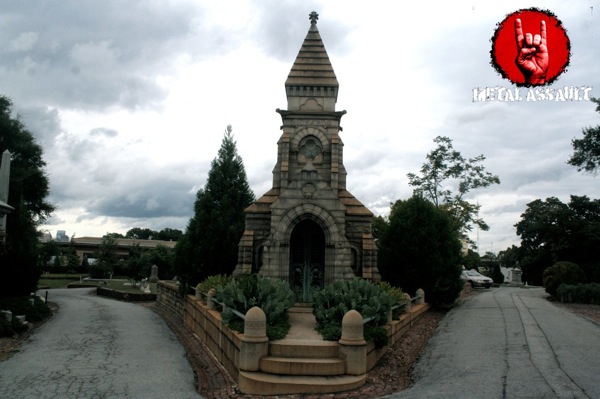 Following the long drive from Los Angeles and the extended buildup in Atlanta, Night Demon’s North American tour with Raven is now well and truly under way. In this part of the blog, while I sit at the Night Demon merch table and listen to Raven rocking New Orleans, I’m recounting the events of the past five days (read part 1 first if you haven’t yet):

We started the day by bidding goodbye to Exmortus who woke up in the early afternoon and set out towards Florida to continue their tour. While the Night Demon guys took rest at our host Amos Rifkin’s place, he took me to revisit the cemetery to check out a few spots we had missed the day before, including the mausoleum that’s featured on Atlanta stoner metal band Royal Thunder’s ‘CVI’ album cover (pictured above) and an epic tombstone that simply said ‘Thrash’. In the evening, all of us went to East Atlanta Village to scope out the 529, the venue for Saturday’s show, stopping at the Flatiron bar across the street for food and drinks. The Flatiron logo is beautifully etched in the classic Iron Maiden font, just another example of the legends’ omnipresence. 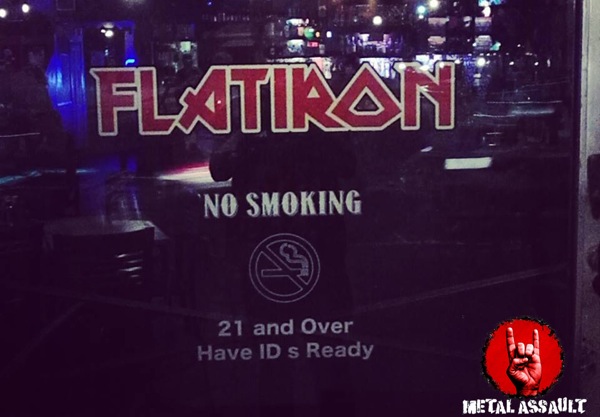 We then went to the venue and immediately dug its vibe, the Night Demon guys getting even more excited for the impending gig. I picked up a copy of ‘Stomp & Stammer’, a local free monthly magazine with Cherie Currie on the cover, and was quite impressed by the interview they did with her. But more than anything, I just couldn’t wait for this night to end and the tour to begin in earnest.

The first show of the tour was finally upon us. But before that, Brent, Amos and I went down to Criminal Records to check out an in-store gig featuring local death/thrash band Cemetery Filth. 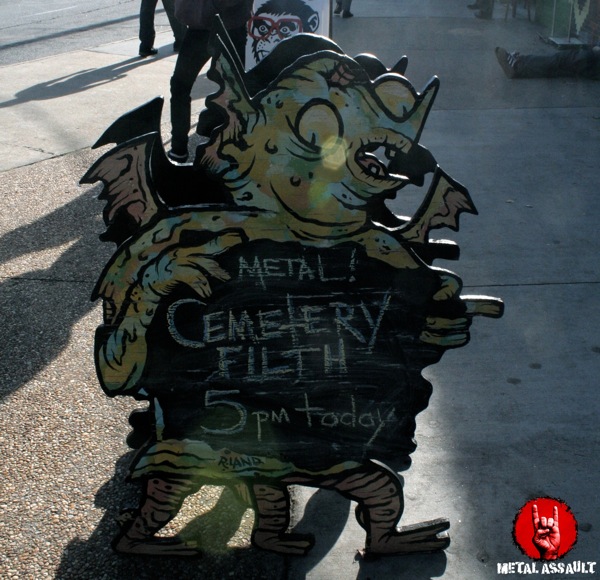 They played a 40-minute set starting at 5 PM and impressed a crowd of around 30 people with some nicely crafted extreme metal tunes of their own along with two well-executed covers, and aside from one of their guitarists wearing flip-flops on stage which should be a complete no-no for a metal band, everything about Cemetery Filth was likable, so much so that Amos asked them to open the Raven / Night Demon show and they instantly agreed. 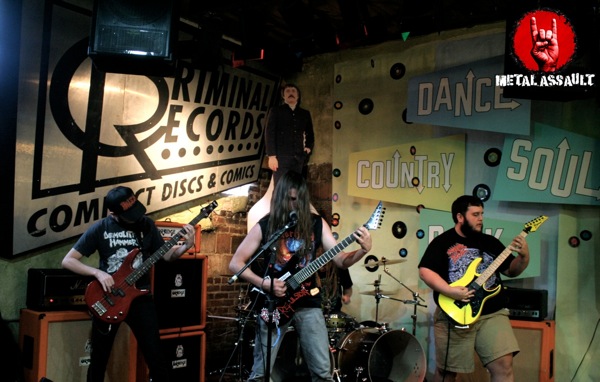 We arrived at the 529 at around 7, loaded in the gear and merch, this being the first show I had to count all the items in stock, which took quite a while and I wasn’t able to finish before doors opened at 9. Even the band seemed edgy and nervous. It was all a bit chaotic, and I got first-hand experience of what bands often talk in interviews about opening shows of tours. Cemetery Filth began the show at 10:15 and played a great set, bringing their fans to this show as well. Local openers are absolutely crucial for shows like this with touring bands depending on it to make money to continue touring, and Cemetery Filth showed what a good local (non pay-to-play) opener can and is supposed to do. 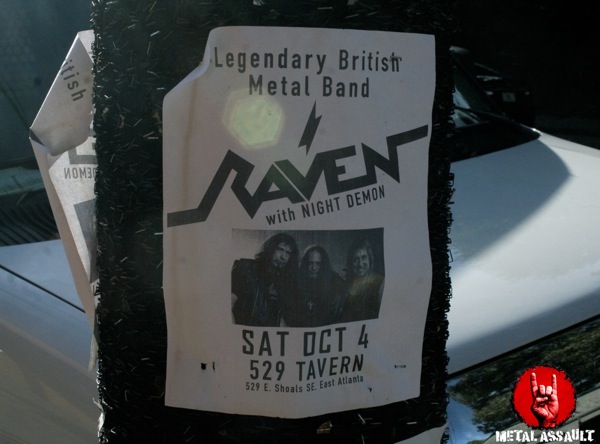 Night Demon’s set started at 11 and was straightaway hit with technical issues as Jarvis’ vocals were inaudible during the first song and the fog machine (which I left the merch table to operate) remained non-functional throughout the set. The band certainly sounded a little rusty and even skipped a song from the set list they had prepared for the tour. They still managed to win over some new fans amongst a capacity crowd of 50 people in this extremely tiny venue, ‘The Chalice’ turning out to be the most popular tune, and even though it was a decent start overall, we knew things needed to get better in every aspect.

Raven played a very long 100-minute set, ‘Rock Until You Drop’ clearly standing out as the highlight. A gnarly fight broke out in the middle of their set, knocking over the Raven merch table and definitely scaring some of the people away from the show. The Raven set ended at 2 AM which meant after packing up and loading out, we wouldn’t get back to Amos’ any time before 4 AM. We got only four hours of sleep before we had to rise to leave for our next destination.

We woke up early on Sunday, said our thanks and goodbyes to Amos, and set out straight for the next show in Memphis. Dustin handled the entire 7-hour drive all by himself, and at around 5 PM we reached the Hi-Tone Cafe, located in the midst of what looked like a ghost town with no human anywhere in sight. Doors to the venue were soon opened for us to load in and set up. They gave us free BBQ food which wasn’t bad. But we couldn’t find any flyers for the show, there was no local opener, and we had a bad feeling about this gig which was justified in the end, sadly, as Raven and Night Demon played to a grand total of 9 people, easily the lowest attended show I’ve ever experienced in my life so far.

But on the positive side, Night Demon really tightened their performance in comparison to the Atlanta show and delivered the goods, impressing all nine in attendance as Jarvis made extra effort to interact with this ultra-small crowd and make them feel good about choosing to attend a show nobody else did. Dustin sounded supreme on drums and no one from the outside could have guessed that he drove for 7 hours and got no nap time before the set. Raven shortened their set to an hour and this show was over much earlier than anticipated, perhaps rightly so.

But the highlight of this Memphis trip which was overall far less enjoyable than the last time we were here three days ago on the way to Atlanta came from an episode that transpired out of my sight while I was manning the Night Demon merch table. According to Jarvis and Brent, two stoner dudes who looked like the trailer park boys hung out with them in the band van and started singing Megadeth’s ‘Peace Sells’ pronouncing each word in a thick Southern accent. It was probably a good thing I wasn’t around to witness this first-hand as I would have most certainly died due to excessive laughter.

On the whole, although we couldn’t wait to get as far away from Memphis as quickly as possible, the band felt good about their performance and we all had new-found respect for Raven who are out here doing it in true DIY style, taking risks playing in places such as these with non-existent metal scenes. We proceeded to gorge ourselves at a Waffle House after which Jarvis drove through the night with me in the front seat as we cranked the Amulet debut full-length album ‘The First’, Accept’s latest and Stryper’s ‘Live At The Whisky’ among other new albums which kept us awake to varying degrees.

I passed out in the front seat at around 7 and woke up with the van stationary at a repair shop in Louisiana as Jarvis was trying to get a blown fuse changed. Without this we wouldn’t be able to charge our electronic devices while on the road. It was an off-day on the tour with no show on the night, and upon entering New Orleans and realizing that none of us knew anybody who would put us up for the night, the band decided that we should spend the day in a Super 8 motel room. After a largely sleepless first week of tour, we relished the motel room’s beds and literally slept all day and all night to recover from it and get ready for week 2 which would comprise seven shows in a row.

Re-energized from the marathon sleeping session, we checked out of the motel room at noon and cruised to downtown NOLA where we took a walk on Bourbon Street and the surrounding areas that are considered a tourist attraction, even though I personally didn’t find anything attractive and the area only succeeded in making us go round in circles. Restaurants, bars and diners don’t really count as tourist spots (unless they’re rock/metal themed) and to me the experience of visiting a unique or historical place, or attending a great event, would stand out in memory much farther than food or drinks down my stomach. Anyhow, I digress. We left that vicinity and arrived at Siberia, the venue for Raven and Night Demon’s NOLA show. 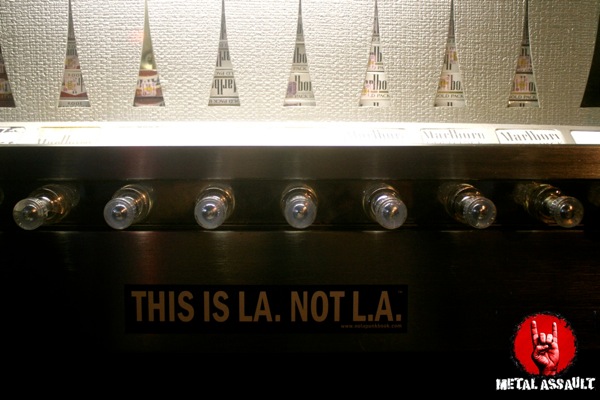 Thankfully there was a local opener this time, flyers existed, and the turnout was slightly better with 20 people in attendance. The bartenders and the venue’s staff were really friendly towards the bands and the free food they gave us was great. A sticker on the cigarette machine that said ‘This is LA, not L.A.’ was rather amusing to us L.A. folks. The show started at 10:15, Night Demon played at 11 and absolutely killed it, clearly getting better with every show. Every single attendee was impressed by Night Demon’s set, the fog machine worked for the first six songs of it, and even though it was such a small audience, a lot of merch was sold and it was definitely a successful gig for us. Raven took a while to start their set at 12:30 which was perhaps a little too late in the evening, even though they’re also sounding better with every show. 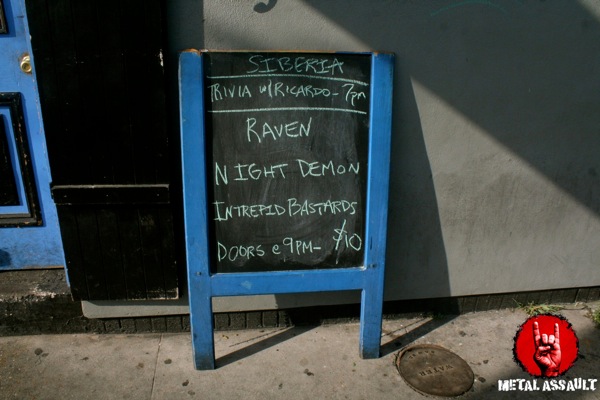 Due to Raven’s super-late finish, we got done loading out and exiting the venue not before 3 AM, and Dustin drove through the night this time amidst thick fog, me again in the front seat typing out this blog and as I finish this piece right now, it’s 8 AM and we’re still a few hours away from our next destination, Dallas. Inspired by the NOLA success, Night Demon is ready to conquer Texas, Arkansas and New Mexico during the remainder of this week. Stay tuned for more updates and blog posts.