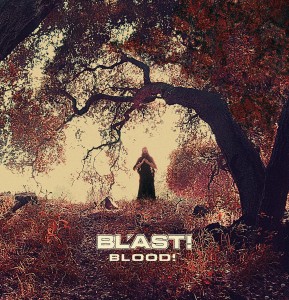 When you think of heavy and savage music in the Bay Area, what is the setting that you picture? Is it a small club in San Francisco, or a grimy warehouse in Oakland? Maybe it’s a house or a dilapidated rehearsal space in the vast recesses of the East Bay? Why not the surfer’s haven, Santa Cruz? That odd town hidden behind Highway 17 is home to one of the bay’s coolest secrets, a band called BL’AST! We’ll just call them Bl’ast from here on out- no need to yell after all. Back in the late ‘80s, Bl’ast was one of the Bay Area’s best contributions to the hardcore punk movement. Their music, noted by blinding speed, shredded vocals and jagged (yet incredibly heavy) riffs, was the logical successor to the sound first heard on Black Flag’s legendary My War LP. Fittingly enough, Bl’ast released three albums on Black Flag’s own label, SST Records, before calling it quits in the early ‘90s. In late 2013, the hardcore punk world found itself in for a treat- Bl’ast came back from the dead, and the band brought with them a new version of their second album, It’s in My Blood, now entitled BLOOD! As 2013 comes to a close, the members of Bl’ast are ready to play their second show since reforming. I meet with singer Clifford Dinsmore and guitarist Mike Neider barely an hour before they hit the stage at the Regency Ballroom in San Francisco, and they offer me a look at how they managed to return to the music world and resuscitate the raddest band to come out of Santa Cruz, CA.

The gears began turning when Neider stumbled upon the master recordings for It’s in My Blood. Neider explains that it was his pal, Southern Lord Recordings head Greg Anderson, that encouraged him to give those tapes their first play in twenty-five years. “I’ve been working with Greg for about ten years now, my personal business with his business. We’ve done shirts and merch and we always talk about [Bl’ast] all the time. He said, ‘Well send [the tapes] down to me man,’ we sent them down and decided to let him see what he could do with them.” Anderson, anticipating that the tapes would be in less than ideal condition, came up with a course of action. From what Neider has to say, Anderson’s decision making was sound. “It’s funny because after Greg got these tapes he said, ‘Oh, I’ll send it to Brad Boatright in Washington and see what he can do with them and see if they’re even usable.’ We thought they’d just be destroyed after all these years.  A couple weeks go by and he calls me up, ‘They’re so dirty that we can’t even play them. The machine is just caked. The only chance we have left is to bake these tapes. That can either destroy it or fix it.’ So we figured yeah, just go for it. Nothing to lose.”

Anderson’s gamble paid off- Neider was stoked. “We get a call a week later, ‘Holy shit, it totally worked. We baked these tapes and they totally worked, only thing is that it stripped out some of the tones.’” While that would spell disaster for most other bands, the event was a bit of a blessing in disguise for Bl’ast. According to Dinsmore, It’s in My Blood was made in a place where no one knew how to engineer hardcore punk. “The thing that was funny about back then was that it was totally the luck of the draw. There was no one you could really go to for that kind of music and get it right… If you were in Santa Cruz and went into an average recording studio and said, ‘We’re going to record this,’ you’re going to end up with someone who doesn’t know how to deal with it at all.”

For Neider, the project became just a bit cooler when an old friend got wind of it. “Dave Grohl found out about [the project] and said, ‘Fuck, bring them over to me and let me see what I can do about it.’ He got the tapes and took everything off of it, stripped it down to the bare bones and added what he thought was fucking insane. They worked on it for a day or two or something, called Cliff and I and said, ‘Fuck, get down here man. Check this shit out.’ We went down and it was insane.” Grohl gave It’s in My Blood the mix it always deserved using his Neve 8028 console, the legendary piece of gear featured in his film Sound City. “Dave stripped it down, took off all that ‘80s stuff that was supposed to make it sound super huge but ended up just compressing it. So now it’s like Bl’ast in 3-D, it’s crazy,” Neider explains. BLOOD! would be released on September 3rd 2013, and the reception would be largely positive. This was the way Bl’ast should have been heard all those years ago.

Though the ‘80s drum reverb was now gone, there was a rather cool sonic element freshly added to the new mix: guitar tracks played by former member Kip DuVall. These days, Kip goes by his birth-name of William and sings for a band called Alice in Chains. DuVall gave Neider and Dinsmore his blessing, and Dinsmore was even able to reconnect with his old buddy when Alice in Chains rolled through town. “It was cool because all of [DuVall’s] tracks got brought up and it sounded insane. We thought, ‘Man, we better give him a call!’ He called me back and he was really excited about it. Alice in Chains came out to Shoreline Amphitheater in San Jose, and it was really cool. He had a day off so I went over the hill and hung out with him and we just talked for hours and hours.”

Neider and Dinsmore’s new collaboration with Southern Lord brought up the obvious possibility of Bl’ast returning to the stage. Dinsmore, who remained a fixture of Santa Cruz’s heavy music scene, recalls that the current incarnation of Bl’ast with Hoss Wright on drums and Nick Oliveri on bass was almost assembled sarcastically. “It was funny because I work at a place called The Catalyst in Santa Cruz and Mondo Generator was playing there. I had the night off so I was just hanging out and that was the night I met Hoss and Nick. I was talking with Nick and he was telling me, ‘Dude, you gotta get Bl’ast back together.’ I mentioned that Southern Lord was going to reissue all the records. He’s like, ‘What, really?’ I said, ‘Yeah, I think there’s going to be some live shows,’ and I was just joking. He asked, ‘Who’s playing bass?’ ‘You are!’ and he’s like, ‘Fuck yeah, I’ll do that shit!’ and he kind of surprised me. All of a sudden Mondo plays and Hoss is drumming and I call up Mike and tell him, ‘Dude, you gotta check this out.’”

The journey to the stage was not going to be easy however, especially for Dinsmore. “At that point in time, I was really out of shape and injured. I had gotten in a wreck a couple months before that. For me it was like, ‘Okay, sure…’ It was like the physical transformation that would have to take place, it was going to be a race against time to make it happen. It happened though, it gave me a lot of good discipline in my life, doing the physical therapy and having it be so intense.” The rehearsals with Wright and Oliveri would take some effort, but Dinsmore was well aware of the commitment. “[The rehearsals] were awesome, they just kind of progressed because it took a lot of time to get back into it. It’s not something you can do half-assed, it’s gotta be all the way. It took some work to get there.”

This lineup of Bl’ast would spend nearly six months rehearsing away. Neider was chomping at the bit to play before an audience. “We were actually a lineup since June or May. We had shows lined up that fell through, but six months later we finally got to play. It was like this anxiety thing that was like, ‘Alright, we can finally play!’” On December 28th 2013, Bl’ast would play their first show in over a decade at The Observatory in Santa Ana. Many of their friends and peers from back in the day would be in attendance, and Dinsmore knew that they’d be the band’s toughest fans to please. “[That night] we just had the heaviest panel of critics. People who were there from twenty years ago and were at all the shows. Greg Anderson, Scott Hill, Fred Hammer… people who had seen us so long ago and would be hardcore Bl’ast critics. They were stoked, but we were worried. ‘What are these people going to think?’ They were our monitor.”

The next day, Bl’ast drove up to the Bay Area for their homecoming show. Their thirty-minute set proved to be muscular and lethal, with Neider headbanging like his life depended on it and Dinsmore instilling fear into the hearts of those in the audience. The songs sounded simply monstrous in the live setting, with the title track from It’s in My Blood bringing the set to a crashing and heavy as hell finish. It was a triumphant return by any standard. Dinsmore was pretty dead on when he did his best to describe Bl’ast as a live unit. “It feels better than ever right now. We’ve got that violent aggression that the music has always carried, and we’re really positive in the way we play right now. Hoss and Nick have brought this whole new element to it, they’re tight and punchy. It’s just insane, there’s an energy right now that feels really good.”

As for what the future holds, Dinsmore says fans can expect a remastered version of Bl’ast’s first record, The Power of Expression, to be released via Southern Lord. “From there on it’s a toss up between new stuff and try to fix Take the Manic Ride. There’s not much we can do with that one because we don’t have the original tapes-” “Other than re-record it,” Neider says as he finishes Dinsmore’s sentence. “That’s a concept that’s been thrown around. That’d be a pretty big project to take on so many years later, but it would be kind of awesome.” Neider laughs at the challenge. “We’d be stoked to do it.” Until then, for those who want to catch Bl’ast live, they are playing on January 10th at The Echo in Echo Park with Nails and The Shrine, and on January 25th at Brick by Brick in San Diego. Bl’ast is back, and they are out for blood.