While some of the better-known names in the world of hard rock and heavy metal had a great 2013, others failed to live up to their past reputation. But amongst these were some who were relatively unknown, and based on what they did this year, they were able to stake their claim as the best emerging artists. Below are my picks for the top 13 in this category: 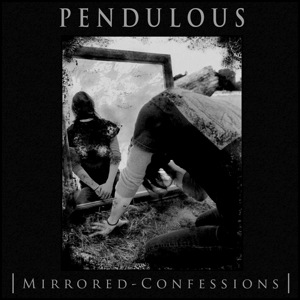 13. Pendulous – Los Angeles-based doom metal quartet Pendulous released their debut EP called ‘Mirrored Confessions’ this year and played a number of impressive gigs in and around the LA area. Portraying a very expressive variant of doom, this band brought pride to the local underground metal scene with their mesmerizing performances in 2013, and looks set to continue to do so in the coming year.
facebook.com/PendulousDoom 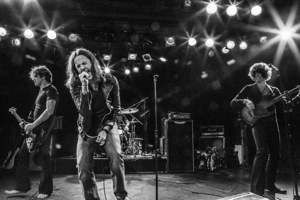 12. Black Belt Karate – Punk-infused rock n’ roll outfit Black Belt Karate began their journey last year and went on to put out their self-titled debut EP in 2013. To promote its release they played a string of shows, including one incredible performance at the Satellite in late April which really drew me towards this Los Angeles-based band in the first place. They also showed versatility by playing an acoustic show at the Mint later in the year. Their music crosses over extremely well with fans of heavy rock n’ roll, punk and indie, and with this kind of diversity their future looks bright.
BBKOfficial.com 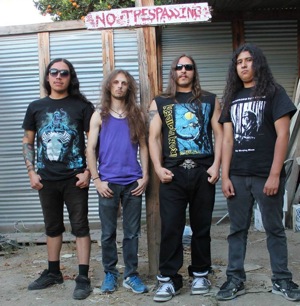 11. Madrost – Based out of Lake Forest, California, thrash band Madrost have been around since 2007 and have continued on with a DIY approach, as an unsigned band. Following various demo and EP releases, they came out with their debut full-length ‘Maleficent’ last year. But during the year of 2013 they really announced themselves as an active band and stamped their authority on stages across Southern California as they opened for bigger acts and left their mark whenever they performed. Led by frontman Tanner Poppitt’s ferocious personality and musicianship, the band managed to impress audiences and with the imminent release of their second full-length album, thrash fans in Southern California can expect to see a lot more of Madrost in 2014.
facebook.com/Madrost 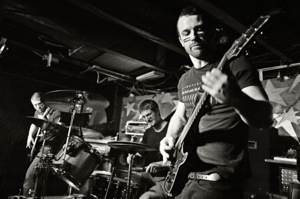 10. Lazer/Wülf – Hailing from Athens, Georgia, experimental metal trio Lazer/Wülf toured North America with Orange Goblin and Holy Grail this year and came to the LA show of the tour at the Satellite as a largely unknown entity, but walked away winning over a majority of those attendees who arrived at the show early enough to catch this band. Their all-instrumental style allows them to express their individual and collective musicality to a great extent, as is proven on the two EPs they’ve released thus far, and their upcoming debut full-length should be a worthwhile offering for fans of instrumental/experimental/prog music. Aside from this album release, Lazer/Wülf is an unmissable live band and will hopefully demonstrate more of that quality in 2014 through active touring.
LazerWulf.com 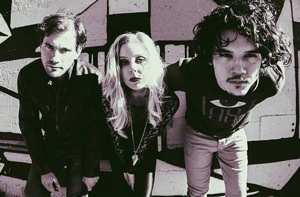 9.  The Vim Dicta – Spreading their ‘psycho groove’ to the masses, a new talent has emerged in Los Angeles this year in the form of The Vim Dicta, a trio of massively creative musicians bringing forth a blend of psychedelia and a very old-school hard rock approach a la The Doors, early Led Zeppelin and several others. Their live shows have a hypnotic impact on audiences and their debut EP ‘Von Tango’ is equally compelling. This was a completely random, out-of-the-blue discovery for me, and in retrospect I’m certainly glad I decided to check them out on an exploratory whim. They look set for greatness in the near and long-term future, and I’ll be rooting for them all the way.
TheVimDicta.com

8.  Sirion – Melodic/folk metal band Sirion have hit Los Angeles’ local scene harder than anyone else this year, and their efforts have paid off. They did a large number of ‘pay-to-play’ gigs opening for nationally touring acts, but the gigs were very well-chosen and helped them build a fan base as they played with like-minded bands and catered to receptive audiences. That’s where they stood head and shoulders above the plethora of local bands doing pay-to-play gigs. Their performance level was always stellar no matter who they opened for, and at times they were as good or even better than the headlining acts. This band is undoubtedly destined for even bigger and better things in the coming years.
Sirion.US.com 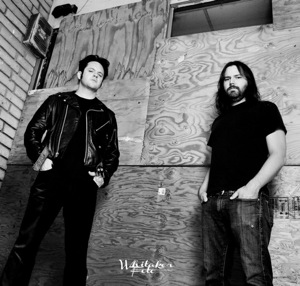 7.  Night Demon – Ventura, California-based old-school heavy metal band Night Demon are still a very new entity but have made rapid and long strides as a band this year. They first caught my eye and ear when they opened for Cauldron at the Five Star Bar, and they’ve only gone upwards since then with killer gigs both as headliners and as an opening act, including a three-show run with Diamond Head and Raven. Their self-titled debut EP has garnered widespread attention and acclaim, satiating the desires and tastes of old-school metalheads. With grand plans for a full-length album release and gigs in North America, Europe and beyond, 2014 should in all probability be the year of the Night Demon.
NightDemon.net 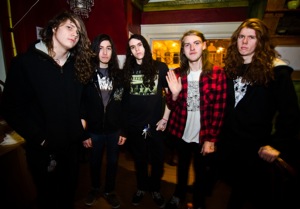 6.  Noisem – Baltimore thrashers Noisem have announced their arrival onto the global metal scene in a big way, with a hugely impressive debut full-length album called ‘Agony Defined’ released via A389 Recordings, and a tour with The Black Dahlia Murder and Skeletonwitch which exposed them to large audiences across the North American continent even though their involvement in the tour was cut short by a road accident and vehicle damage. The average age of this five-piece lineup is only 18, and by the looks of it, they’ve set themselves for a long career ahead.
facebook.com/NoisemBaltimore

5.  Twelve Foot Ninja – Australian band Twelve Foot Ninja most definitely came across as the surprise package of the year, with their truly unique style of musicianship which presents a fusion of 90s hard rock, modern metal, jazz and reggae. They’ve been around since 2007 but 2013 was the year of their formal introduction to North America, with the release of their debut album Silent Machine and their first ever tour alongside Periphery, Born Of Osiris and Dead Letter Circus. At the Los Angeles show of this tour, they absolutely blew all other bands off the stage and put on a stunningly good show. People checking them out for the first time became immediate fans, such was their impact, and these fans are already looking forward to more new music and touring from Twelve Foot Ninja in the near future.
TwelveFootNinja.com 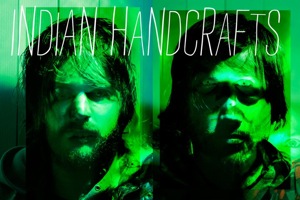 4.  Indian Handcrafts – Canadian duo Indian Handcrafts started out in 2010, but this year they covered some solid ground in their quest towards redefining musical creativity as they demonstrated their wildly eclectic brand of musicianship on North American stages during their tour with Red Fang and The Shrine as well as other one-off gigs and tours through fantastic performances. Even as a two-piece band they achieved astounding levels of heaviness and diversity in their live music, to the extent that it dwarfed several bands with more than two members. The world of heavy music is fortunate to have Indian Handcrafts, and this band fully deserves to showcase its talent to an even larger set of audiences from here on.
IndianHandcrafts.net 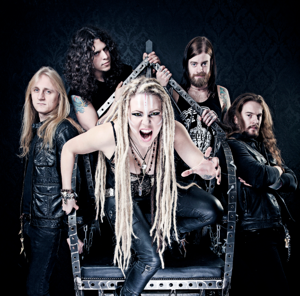 3.  Kobra And The Lotus – Canadian female-fronted heavy metal band Kobra And The Lotus underwent an incredible transition this year as they got signed to a major record label and toured actively with the likes of Fear Factory and Amaranthe in North America, along with festival appearances abroad. Led by Kobra Paige’s pristine vocal delivery and well-supported by her band mates, the band’s music on their self-titled debut album has turned out to be epic in the true sense of the word, on the studio version and specially in the live setting where it has impressed one and all. There is no doubt that mainstream female-fronted metal bands have an inescapable stigma associated with them and a lot of people have preconceived notions when it comes to such bands, but Kobra And The Lotus are defying the stereotype and proving the detractors wrong.
KobraAndTheLotus.com

2.  Anciients – Vancouver, Canada-based Anciients took the world of progressive heavy music by storm this year with the release of a beautifully creative and compelling debut album called ‘Heart Of Oak’ via Season Of Mist records, followed by some high-profile tours where they demonstrated the true power of these compositions. Comprising of a combination of mellow and heavy musical patterns, Anciients’ tunes have struck the right chord with fans of the genre, and as they prepare to work on the next album, the momentum from 2013 would certainly inspire them towards achieving greater success and their creativity should know no bounds.
Anciients.com 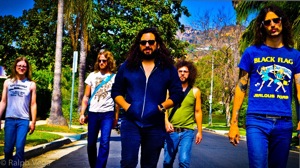 1.  Scorpion Child – Based out of the ever-artistic Texan city of Austin, Scorpion Child have certainly been the most successful new band this year. It started with their signing to Nuclear Blast Records for a worldwide deal and snowballed into a stellar year as they toured with Clutch and Orange Goblin, released their self-titled debut album, appeared on the Mayhem Fest trek, and then did their own headline tours across North America and Europe. A nod to Zeppelin-esque classic hard rock but with modern tendencies, Scorpion Child’s music is easily accessible for any and all fans of hard rock and heavy metal, and the energy they bring on the live stage is infectious. They’re reviving a bygone era of heavy music without being strictly revivalist, which is what separates them from the multitude of retro-rock acts in existence today. Scorpion Child have graced our favorite genre as a breath of fresh air.
ScorpionChild.com