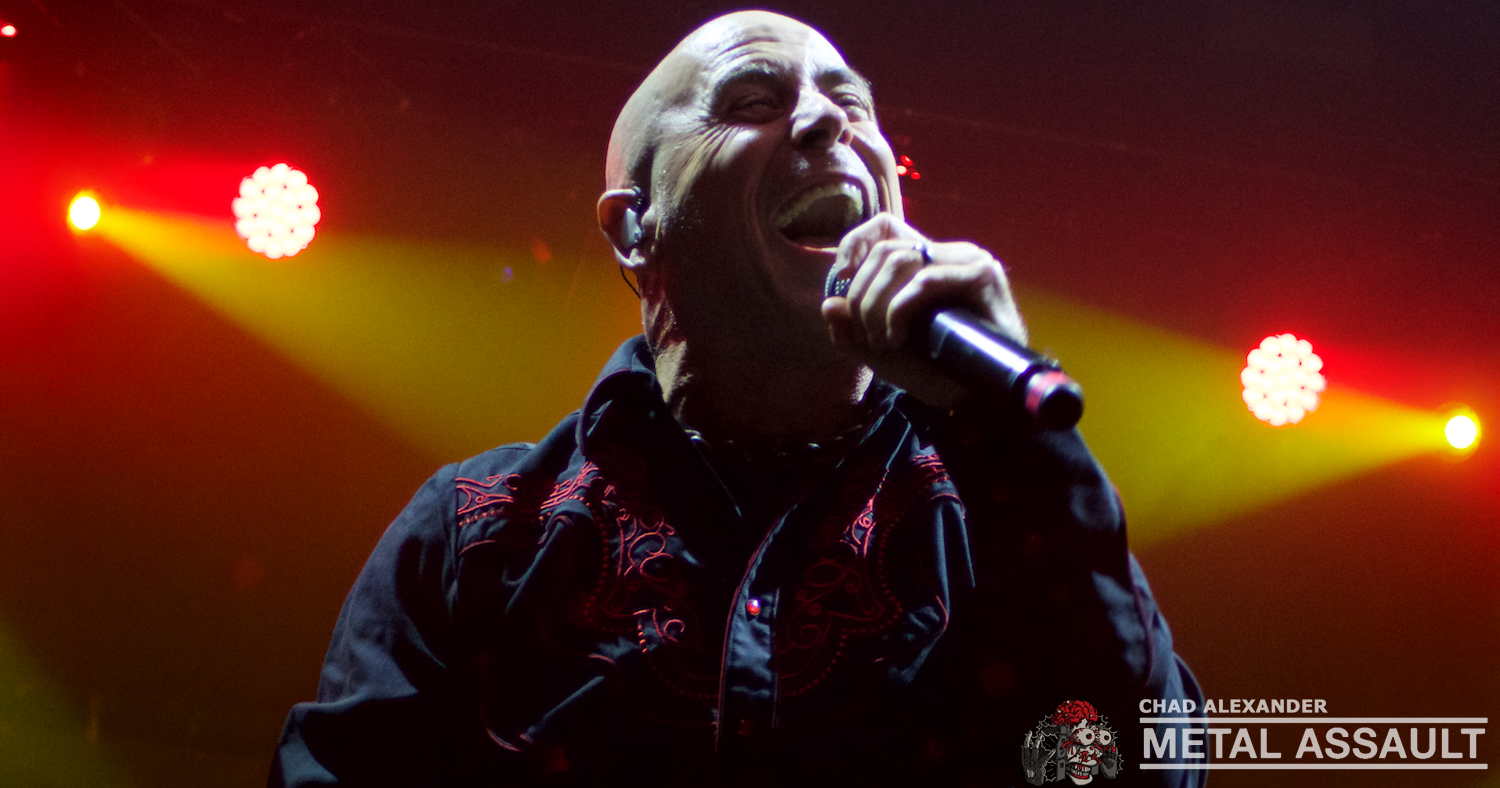 August 18 2018, The Regent, Los Angeles CA: When one talks of Los Angeles’ contribution to the world of heavy metal over the years, it is often the glam and thrash genres that take center stage in that discussion. But the real and original Los Angeles metal scene lied somewhere in between, and got lost in the shuffle because the bands representing it stayed true to their authentic sound and did not cater to either the glam or thrash scenes. One such band, Armored Saint, formed in 1982 and is still going, perhaps stronger than they’ve ever been, still releasing great new music and doing full justice to their legacy through scintillating live performances. This year, they decided to perform their ’91 album Symbol Of Salvation in its entirety on tour, and ended the run in their hometown, with an unforgettable sold-out show at the Regent in downtown Los Angeles last Saturday.

Doors opened at 7, and opening act Act Of Defiance took the stage promptly at 8 PM for a 45-minute set. Formed by Chris Broderick and Shawn Drover in 2014, immediately after they both quit Megadeth,  Act Of Defiance gave a good account of themselves with a selection of songs from their two full-length albums released till date, presenting their blend of speed, thrash and modern metal. The one most notable aspect of this band’s music and live performance is that it very much revolves around the guitar mastery of Chris Broderick. With a career boasting stints in bands like Nevermore, Jag Panzer and Megadeth, Broderick is undoubtedly one of the finest modern-day metal guitarists, and aside from his brilliance as a player, his songwriting abilities are now coming to the forefront in Act Of Defiance. He and his band put forth a solid performance here and received a largely positive response from a room full of Armored Saint fans. Two albums in, this band has had a successful launch, but one gets a feeling that they will express themselves even more in the years to come. All in all, an ideal opening act for this show.

At 9 o’ clock, the lights went out and the packed-to-capacity Regent theatre went into sheer delirium in anticipation of the headliner’s appearance on stage. Armored Saint came out all guns blazing, playing one song each from the first three albums, starting with their most loved classic “March Of The Saint” and following it up with “Long Before I Die” and “Chemical Euphoria”. The band sounded incredibly loud throughout their performance, and the deafening roars and cheers after every song raised the volume levels inside the building even further. Let it be stated with no hesitation that alongside Bruce Dickinson, John Bush is the best singer in heavy metal, and the intensity and ferocity with which he hit every single note and fronted the band through this initial segment was a clear indication that fans were in for a very special treat here, as the main course was yet to come.

The fantastic start meant that fans were more than warmed up and primed to hear Symbol Of Salvation in its entirety. With “Reign of Fire”, Armored Saint wasted no time in launching into it and the crowd’s excitement knew no bounds. The band proceeded to play all 13 tracks comprising the album, as John Bush shared stories behind every song before they played it, and along the way he gave due reverence to original guitarist Dave Prichard, who wrote a large chunk of the album but passed away before the band recorded it. Seeing the band play this album live now in 2018 makes you realize that Symbol Of Salvation was the first album this current lineup of Armored Saint recorded together, and admirably, this lineup has stayed together since then. It’s only fitting that the same members are getting to perform this album now. Many bands tour to celebrate anniversaries of classic albums these days, but in most cases they no longer have the same lineup, and this is where Armored Saint stood out and did it for the right reasons, with the right personnel. A much-loved album among fans, it sounded just as excellent live as it does on the studio recordings, and longtime fans were thrilled to hear songs they’d never heard played live before, not even on the original Symbol Of Salvation tour. During his speeches, Bush also addressed the fact that four-fifths of the band grew up in the El Sereno area of LA, which drew massive cheers from the El Sereno faithful in the crowd.

The band finished the Symbol Of Salvation portion of the set, but we were far from done yet, as a very special “encore” followed. It felt like an encore but the band never stepped off the stage and John Bush even poked fun at the fact that calling it an encore is pointless because everyone knows it’s inevitably going to happen anyway. The band turned back the clock to ’83 to dust off a very rarely performed song “On The Way”, off of the self-titled debut EP, a very unexpected bonus. Then came the title track off of their 2015 album Win Hands Down, proving that this is by no means a nostalgia band and the newer material is just as strong as the old. John Bush’s son joined the band on stage for “Can U Deliver”, and Armored Saint truly brought the house down with the final song, “Madhouse”.

John Bush was at the absolute peak of his powers throughout the entire set, as were his band mates, Joey Vera (bass/vocals), Jeff Duncan (guitar), Phil Sandoval (guitar) and Gonzo Sandoval (drums). Individually and collectively, all five members were giving more than their 100 percent into this mind-blowing, spellbinding, fist-raising, neck-breaking performance. Much in the same way that it’s special to witness a San Francisco Bay Area thrash band in their hometown, or a German classic metal band at Wacken, there is nothing quite like seeing Armored Saint in LA, and this show at the Regent proved this beyond any doubt. If you’re a fan of the band and live elsewhere, you’d be well advised to travel to Los Angeles to catch their show here instead of in your hometown. As Bush rightly pointed out during the show, this band draws influences from German and British classic hard rock legends but certainly carries an LA feel in their music. Armored Saint should be synonymous with Los Angeles metal, and in an ideal world, they would be.

The Saint still marches on, stronger than ever. Best show of the year, bar none.