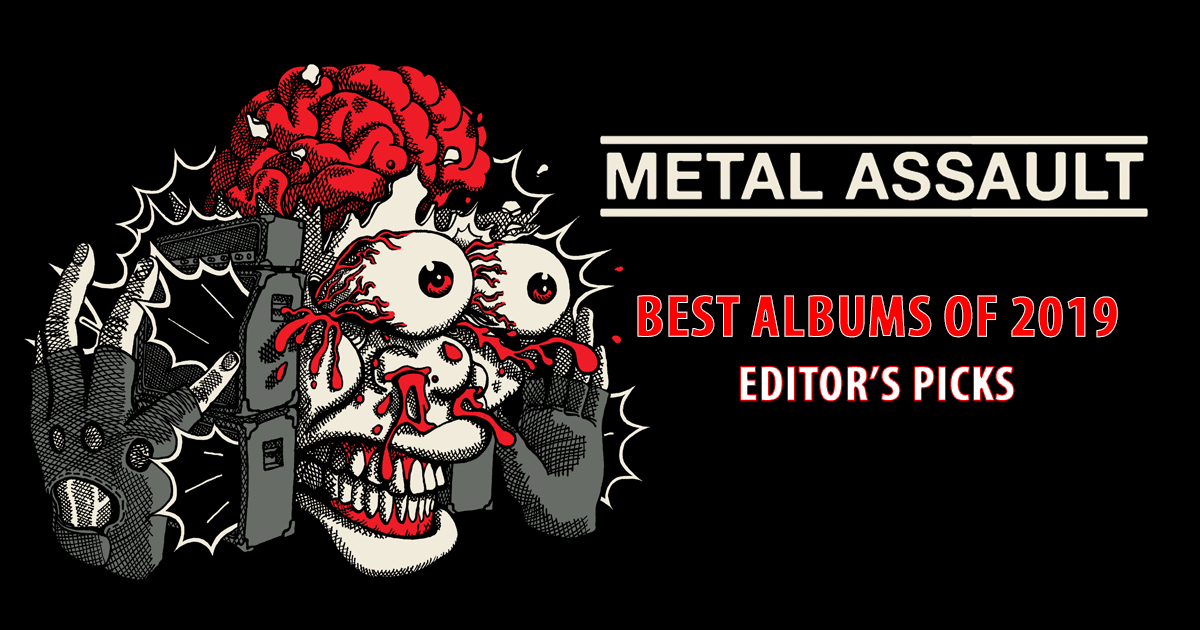 #5. DEATH ANGEL – Humanicide (Nuclear Blast): To make compelling thrash metal in the year 2019 is no easy task, but one band that continually excels and keeps getting better at it is Death Angel. In the 2010s, this band has kept the same five-member lineup and released four stellar albums that have only witnessed the San Francisco Bay Area group going from strength to strength. Their 2019 album Humanicide is a powerful reminder of why Death Angel is not only still relevant but continues to keep their creative juices flowing into fierce, intense, hard-hitting tunes. Boasting 11 songs and a runtime of 48 minutes, Humanicide is unparalleled thrash metal firepower from start to finsh.

#4. OPETH – In Cauda Venenum (Nuclear Blast): From the progressive death metal that they had so wonderfully mastered over more than two decades since their 1989 inception, longstandingSwedish band Opeth underwent a clear, notable shift to a more melodic ’70s-prog-inspired sound – sans growling death metal vocals – with their 2011 effort Heritage. The follow-up albums Pale Communion (2014) and Sorceress (2016) came across as sequels or extensions of the same idea, but to longtime fans and listeners of the band it felt like Opeth was in transition, like they were building up to something massively brilliant. That something is the 2019 release, In Cauda Venenum, the best album Opeth has released in a long time. Unlike any releases of their past, they went the extra yard to record English as well as Swedish versions of this album. To many, the Swedish version may sound more organic, but the English version also stands on its own. In Cauda Venenum sees Opeth explore and put forth a plethora of sounds across multiple layers, and stands out as one of the most fascinating albums of recent times.

#3. DREAM THEATER – Distance Over Time (InsideOut Music): The term “progressive metal” is defined by Dream Theater better than it is by any other band. In addition to the progressions in sonic patterns within every song and album, Dream Theater has also showcased progressions in their creative mindset over the years, as they underwent a major lineup change or two along the way. In the year 2019, the band’s lineup of musicians has remained the same for nearly a decade and this is where Dream Theater found themselves striving for fresh creative ideas while grappling with the nostalgia of their own past work. The result is their mind-numbingly scintillating new album, Distance Over Time, which sees them take inspiration from modern contemporary prog while simultaneously bearing resemblance to their output from two decades past. The sheer class and quality oozing from every single note of Distance Over Time puts the record firmly in the top 5 for 2019 releases, and the band in a league of its own.

#2. KING GIZZARD AND THE LIZARD WIZARD – Infest The Rats’ Nest (Flightless/ATO): What happens when an ultra-prolific, supremely eclectic and wildly experimental group of musicians decides to put its collective focus and energy towards doing something they never did before? And what if that project happens to be a heavy metal album by an otherwise not-so-heavy-metal band? You would have never guessed the answer to be King Gizzard And The Lizard Wizard. The Australian group has only been in existence for nine years, but they released their 15th (!!) studio album this year. Infest The Rats’ Nest is King Gizzard’s take on thrash metal, with sprinklings of hard rock and stoner doom thrown in. With this album, King Gizzard show how to put together an instant classic of an album that flows seamlessly from one song to another. The vocals are atypical, the riffs are fantastic, the songwriting is expert-level, and the production is exemplary. Such is the unfathomable genius exhibited on this record, King Gizzard And The Lizard Wizard completely smash into pieces the very notion of a comfort zone and beyond any doubt prove that a band can create anything if it has the inspiration and desire to do so.  Sometimes it takes a non-heavy-metal band to make one of the best metal records of the year.

#1. IDLE HANDS – Mana (Eisenwald Records): It is rare for gothic rock and traditional heavy metal to be combined at all, and even rarer for it to be done with any level of success. Portland, Oregon band Idle Hands has orchestrated a meteoric rise to break through and above the underground in a very short span of time, gaining widespread recognition for their fresh, unique sound. Formed in 2017 following the extinction of their previous project Spellcaster, Idle Hands got instant attention with their 2018 debut EP Don’t Waste Your Time, a four-song release that captured the imagination of the hard rock / heavy metal underground. This year, the full-length debut Mana has truly shone the spotlight on this band, and deservedly so. From the unique vocal stylings to the captivating melodies, to the memorable lyrics, Mana is more compelling and repeat-worthy than anything released this year. Even with its highly depressive lyrical themes, Mana is strangely uplifting, such is the beauty and brilliance with which it is presented. The true impact of this album can only be experienced firsthand, and cannot possibly be described sufficiently in words. This, is the best album of 2019. Proceed with caution, because once you press ‘Play’, there is no turning back.