Many consider the British band Paradise Lost to be the fathers of the gothic metal genre. Well-known for their ever-changing and inventive sound, these guys are always surprising their faithful fans. Formed in 1988, four out of the five members have been there since the beginning. This tight-knit group is a prime example of a hard working band who knows how to stay original and creative. After exploring and experimenting on albums like ‘One Second’ and ‘Believe In Nothing’, Paradise Lost got back to their roots in 2015 with the release of ‘The Plague Within’. They embraced their dark, death metal background once again and it seems to be sticking. Their newest release, ‘Medusa’, coming out September 1 through Nuclear Blast Records, is their 15th full-length record and one of their heaviest albums to date.

The record rolls out with the track, ‘Fearless Sky’. An eerie organ opens the piece that creates a grim and gothic scene that remains set throughout the rest of the album. Just after 80 seconds into this eight-minute song, Nick Holmes’ vocals kick in and jolts the band’s gruesome, gloomy sound to a whole new level. His menacing, harsh screams penetrate and illuminate the listener with dread. The guitar work of Gregor Mackintosh and Aaron Aedy provide relentless thick, cunning riffs that cut right through the mix, making them the most outstanding part of the record. These guys have been working together for almost 30 years and you can tell in their expert and complementary tones. The sense of foreboding is lost near the end of this opening track when it kicks into an upbeat, rock n’ roll number which really catches the listener off guard. Up next, ‘Gods Of Ancient’, is chock-full of incredibly dirty riffs that sweetly settle on your soul. Gregor knows the fine balance of being rich and fluid while still executing gnarly riffs. Similar to Mikko Lindström from the band HIM, he knows how to cultivate those chunky, gothic tones. The force of the guitars and the drumming of Waltteri Väyrynen guide the listener through the band’s aggressive, substantial sound. 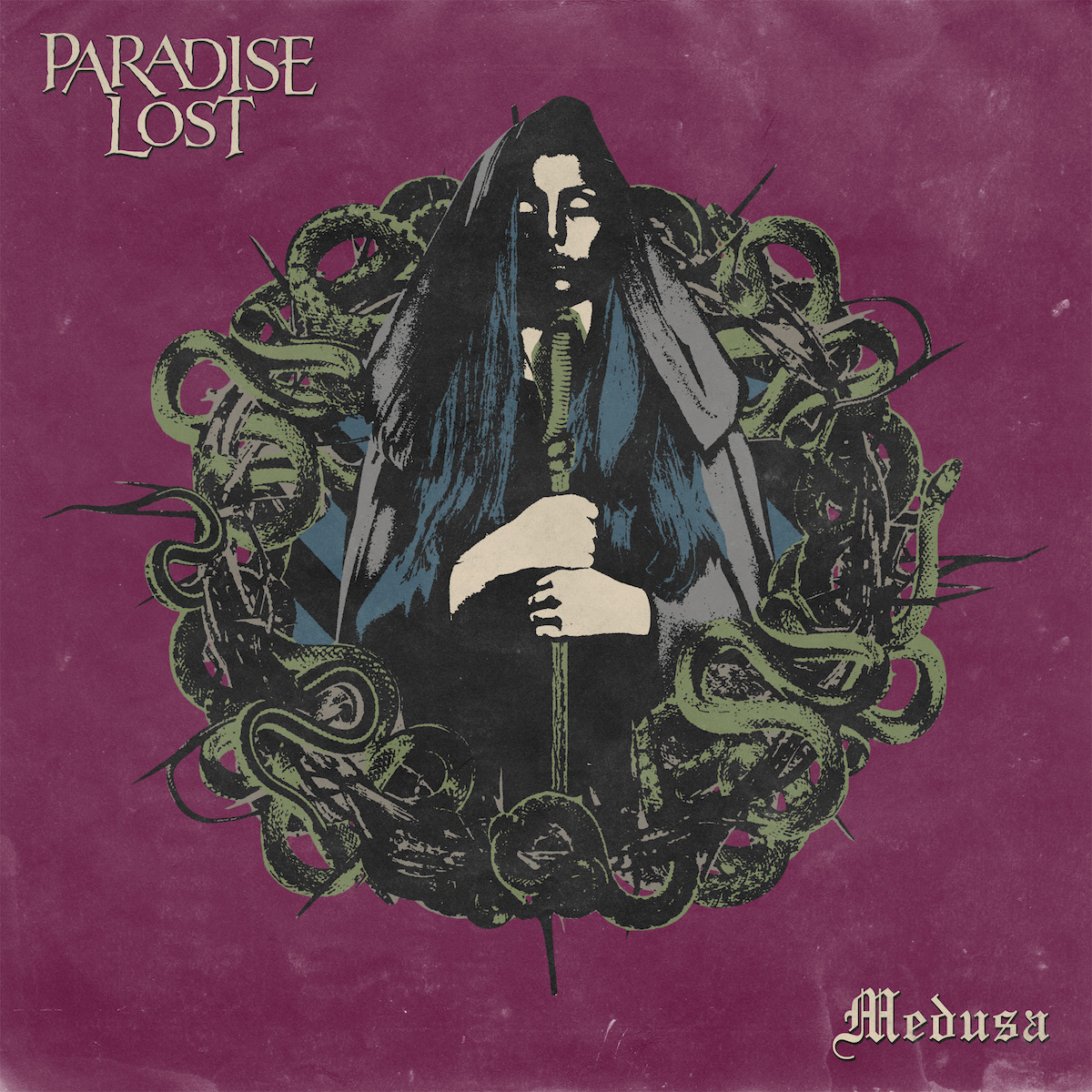 You hit ‘The Longest Winter’ and feel the chilling lyrics as the band slips into a somber, sludgy abyss. The thick distortion of the guitars conjures a real melancholy vibe, giving voice to the band’s pessimistic perspectives. Bass player Stephen Edmondson adds a nice extra layer of heaviness by making these gloomy songs even more dynamic. The title track ‘Medusa’ trudges down into the death metal pits with Nick’s ambient cleans and Gregor’s honest, heavy techniques. You can lose yourself in their distortion and honesty. They grip the listener by providing intrigue, their surprising twists in their song structures allow you to lose yourself in their humdrum of sadness.

Paradise Lost keeps things spicy with their proggy piece ‘No Passage for the Dead’ and their super primal number, ‘Blood and Chaos’. The fluidity and variety of each song grips the listener from beginning to end. The record ends on a heavy note with ‘Symbolic Virtue’. The band contemplates death and darkness while fully indulging in heavy, heavy guitar riffs. Their bleak, compelling content lingers with you and makes a lasting impression. Being the masters of gothic doom and gloom means they know how to be dark, while still being interesting and vibrant.

Paradise Lost is an ever-changing, highly skilled group of guys who have proved for years they know what they’re doing. They were pioneers to the gothic metal scene and on this 15th studio album they continue to define and explore the genre. Truly one of the most inspiring, distinctive, and respected acts in European metal. Go buy this album, you won’t regret it.