Ozzfest meets Knotfest will return to San Bernardino, California in 2017, and is set to take place at Glen Helen Amphitheater & Festival Grounds, Saturday-Sunday November 4th-5th, with a pre-fest kickoff event on Friday November 3rd (exclusively for all ticketed campers). Tickets go on sale Friday July 14th at Ozzfest.com and Knotfest.com. Early ticket prices range from $29.00 for a single day GA lawn ticket to $239.00 for two-day GA pit passes; a variety of VIP packages are also available for each day. The full lineup for the festival has been revealed. Check it out below, along with quotes from Ozzy and Sharon Osbourne, Clown and Corey Taylor.

Ozzy: “Last year’s show with Black Sabbath was just incredible and I’m thrilled to be coming back this year with Zakk, Tommy, Blasko and Adam to headline the 21st anniversary of Ozzfest.”

Clown: “It’s that incredible time again where Ozzfest and Knotfest meet up to bring all music fans together for two days of Rock and Roll. Let’s not forget the beautiful culture we are involved in and the history that is being written. Join the true passion of our concepts. I’ll see you there. Stay (sic).”

Sharon Osbourne: “Ozzfest Meets Knotfest is coming back for another round. Last year we had over 75,000 people attend and we have another great lineup this year with Ozzy’s first solo show in L.A. in more than six years. This is not just another show…it’s Ozzfest Meets Knotfest! And this year’s event means the world to me as we’ll be amongst friends like Prophets of Rage, Rob Zombie, Deftones, Marilyn Manson and Stone Sour… it’s going to be another amazing weekend.”

Corey Taylor: “Knotfest was never supposed to be exclusively about Slipknot. It was always about the things that fueled the spirit of Slipknot: music, art, passion, insanity, and the tribes that give it power. So it would make sense for Knotfest to carry on these ideas, even without Slipknot. Because these things are the gasoline of creativity, and there’s plenty to go around, with plenty of great bands, acts and things to see. Teaming up again with Ozzfest means another weekend of the biggest, baddest, loudest and best. I hope you all will join us; it’s going to be (sic).” 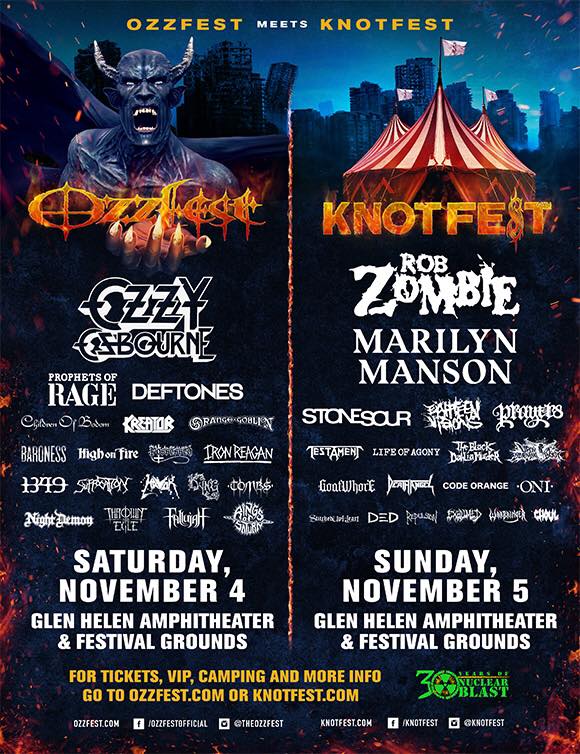