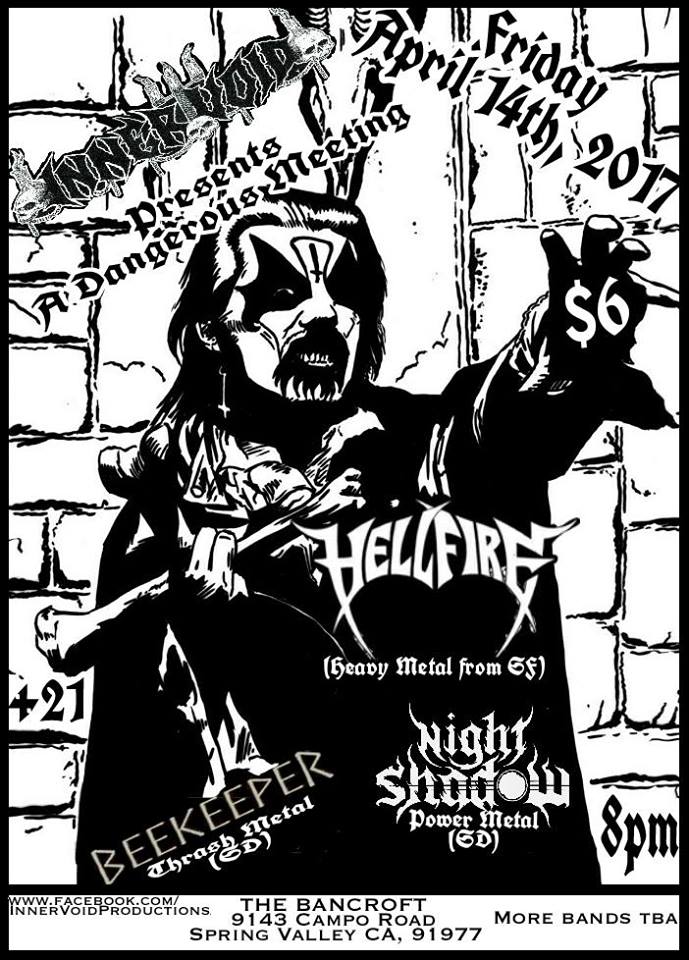 April 14th 2017, The Bancroft, Spring Valley (San Diego) CA: It was one of those Fridays where you are coming home after a long work day and you fire up your social media applications and see a flyer from one of the local bands about a show the same evening about a 10-minute drive from where you currently are. It was a typical ordinary day but this Friday evening really showed something promising; especially for the San Diego metal community.

You see, San Diego is a peculiar market to grasp, and time and time again, online publications, artists, and the like constantly blackmark the city as a weak metal market, or a stop that not a lot of bands decide to take. There are probably a handful of metal venues out here and The Bancroft, your typical run-of-the-mill dive bar in the outskirts of the major city, is one of those metal venues that traditionally has been the stepping stone for bands getting into the scene. You know what I mean if you follow the local scene. There is always that one spot where you can count on getting a show if you are a musician, however, the more established bands seldom set their foot back into these types of joints.  Crowds at the Bancroft could be hit or miss, but this evening, a showcase of two out-of-town bands and two emerging hometown groups drew a healthy crowd and really felt inspiring in a way twofold. One that San Diego is slowly starting to develop some serious traction for artists to come down here and play a show, and the other, that the local scene is starting to cultivate in an expansive way.

Now do not mistake me for this particular evening being an all-out banger, but in many ways this evening really demonstrated the caliber in which the San Diego metal scene is growing into and the development of it as an emerging metal market. It was special in my opinion, and as an artist myself, I felt like for many bands out here that there is a crowd to tap into and that really wants to consume the local metal community. It really shows some promise for the times to come.

Anti-Hero, a Los Angeles thrash metal outfit that has flashes of NWOBHM and flavors of the classic ’80s speed metal canon, opened the show. The crowd had not really settled in yet but this band’s youthful enthusiasm drew the crowd in a little bit. A really young band, both in appearance and in their career, had their way of showing to the audience their vulnerability and their genuine enthusiasm for being in a heavy metal band. Their music had the classic chugging thrashy riffs with throaty vocals to complement the driving rhythm section, and in some moments, flashy guitar abilities with solos in a few songs. I could hear song strong jazz influences which was refreshing too. At times, the music sounded a little punk, and at other times they sounded like the late ’80s style thrash that mimic the sounds of Overkill and Razor.

One moment that I found particularly charming was that the band had seized the opportunity to play on the promotional theme of the evening, which was titled “A Dangerous Evening,” and actually performed Mercyful Fate’s ‘Don’t Break the Oath’. Granted, any band wishing to cover the King has their work cut out for them. I felt their efforts were cut a little short, but I give them kudos for attempting a performance that requires serious guitar and vocal ability.   I had a chance to speak with their talented drummer Ben Richardson for bit and he made mention that their recent studio recordings should be mixed and mastered shortly and to expect a release very soon. For an incredibly young band that has the drive to make the trek down here early on in their career shows promise. But they certainly have a long way to climb, and have a bit of a journey to really mature into genuine musicianship. I really am excited for this young group and hope they continue producing music that would fall under the new wave of American heavy metal, since they have a knack for it.

Beekeeper, a local San Diego thrash metal outfit, has been slowly making some waves down here. Their drummer, Dylan Marks, really does not need much of an introduction to the scene. He plays in a handful of well-established acts down here, and not to mention is an incredibly talented drummer. I spoke to the group and they mentioned that they have been around for years, but really did not get serious with the project until late 2016.

Their performance, which promoted their brand new debut record ‘Slaves to the Nothing’, really drew in the crowd. The power trio, fronted by vocalist and guitarist Ally Levine, encompassed a wide range of thrash metal. One could hear flashes of Sepultura and sprinkles of Slayer, washed down with some Kreator and Pantera. The band is not necessarily flashy, but they have this uncanny ability to transition well in their song structure. The vocals complement the band’s sound well, and they accomplish what they set out to do. An in-your-face thrash attack that in an almost visceral way, draws you closer to the band on a personal level. Levine would growl and shriek in the songs, and then give the crowd a dainty “check out our merch” showing a completely different side of her.

Their overall performance went really well. Marks’ drumming ability helps fill out the speedy chugging riffs and prevents it from becoming stale. The song ‘Vargas’ really encapsulates the bands high level of musicianship and their ability to navigate leaps and bounds in different metal genres. The song ‘Vegeta’ slowed down the speed attack, and sounded like the band could emulate the more industrial and even grungy sounds from the ’90s. But before you think that the band is going into a nu-metal tune, they jump right back into their classical thrash roots. Well done.

The band looks to set the bar really high. Levine and Marks mentioned that they contacted an agency to book a tour along the west coast during the summer, and will continue to keep performing throughout Southern California. Keep your tabs on this band because I certainly have high hopes for them to make a name for themselves in the thrashverse.

The third band of the night, also performing in support of their recently released EP, was the power metal outfit Nightshadow. A relatively new band on the scene, Nightshadow has easily become one of the most active performing bands down here. A band that has dramatically improved in a course of a year in overall musicianship, their recent studio release contains everything one could think of in a power metal group. They have the prototypical flying guitar leads, blazing fast guitar chugs, extended solo breaks and over the top vocals.

What really makes this band shine is their impressive guitar work. The duo of Danny Fang and Nick Harrington, relatively new to the metal scene themselves, easily puts them into San Diego’s higher echelon of guitar players. They often trade solos in their 5-7 minute long song structures, exchange guitar leads during bridges and choruses, and are incredibly sharp.

The anthem ‘False Truths’ opens with a moving guitar lead, slowly building up until the entire band comes in. A headbanger in every sense of the word, the chorus gang vocals and standard 16-note chugs are prevalent throughout the catchy song. One song that I particularly enjoyed was ‘False Truths’. It had a mild progressive metal element in their song writing with the extended ambient guitar intro. The guitar leads here is superb, especially into the bit after the second chorus that goes straight into battling twin guitar solo section. The closing of the solo section with harmonizing lead guitar tapping was particularly expressive, highlighting the immense musical ability in Fang and Harrington.

The band has no intentions to lighten up on their performance schedule and is really a treat to see if you have the chance. Go pick up or stream their new record and really hear for yourself. On the one hand the band has an incredible potential to being San Diego’s premier power metal outfit, especially in the guitar proficiency of Fang and Harrington and their aptitude in producing power metal with some progressive elements, but also must come into their own in terms of showmanship. Then they can truly grow as a group.

The highlight of the evening was certainly the headliner, Hell Fire, a San Francisco NWOBHM band that was wrapping up their mini California tour. They had everything a successful band could have in terms of a live performance, a charismatic front man with the ability to move the crowd, and shred-style guitar work on top of catchy-as-hell tunes. They have the sound that reminds you of the classic NWOBHM era in the ’80s with metal bands decked out in spandex or leather, but Hell Fire also have a polished thrash element in their sound. One would have to hear it for themselves to distinguish it. The band is really skilled in each of their respective music instruments too.

The short-statured vocalist Jake Nunn had a commanding charisma to him and easily had some of the most impressive vocal work throughout the whole evening. His high pitched screams were eyebrow raising and he made it seem effortless.  The touches of speed metal are really well done and are utilized to piece the shred guitar bits together with the choruses. Their sound is definitely reminiscent of Di’Anno era Iron Maiden. The crowd was really digging them too and as the night came to a close they still had a healthy crowd to keep their spirits moving during their headlining set. They played some of their new stuff too which was exciting, and I am looking forward to see what they have up their sleeves going forward.

As the band falls within the genre confines of the New Wave of American Heavy Metal, they really are an expression of the growing and sudden revival and musical turn to the heavy metal of the 1980s. It is an exciting musical development to see and they really have what it takes to make themselves a pivotal band in the exploding traditional metal scene.

Overall, a flawless evening of killer heavy metal from San Diego, San Francisco and Los Angeles at the Bancroft, and here’s to many more.