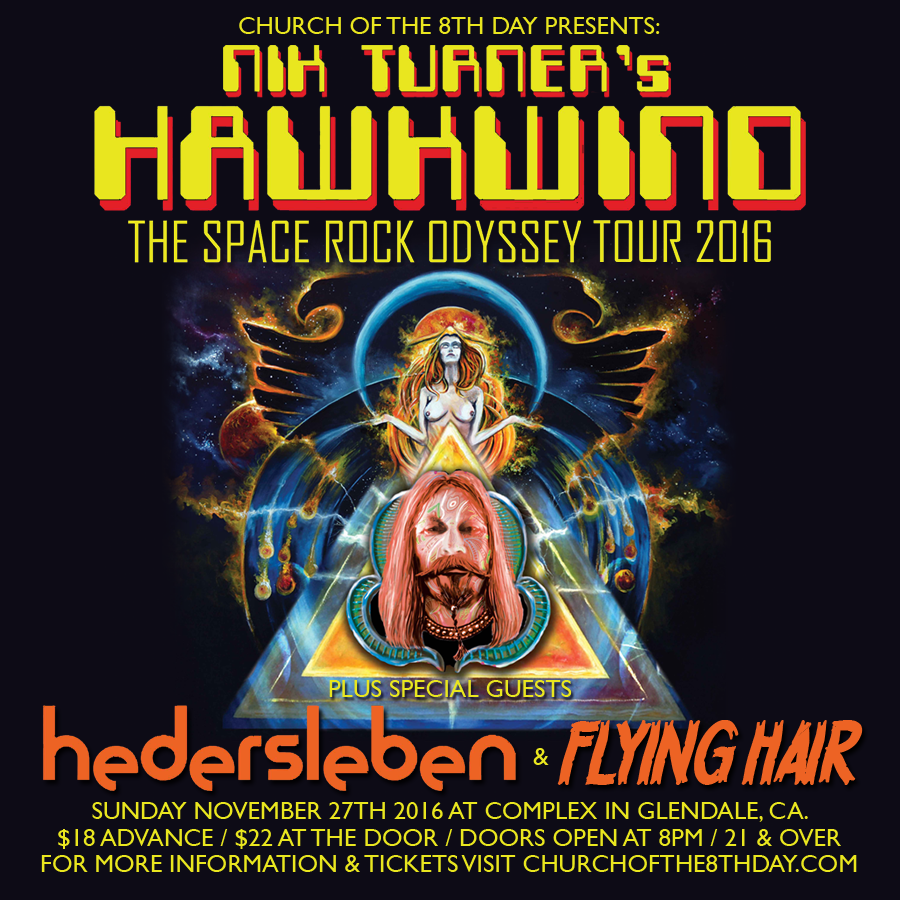 November 27th 2016, Complex, Glendale CA: Space rock pioneer Nik Turner and his incarnation of Hawkwind embarked on a US headline tour in late October 2016 with main support/backing band Hedersleben, and towards the end of the four-week run, visited the Los Angeles area for a gig at Complex in Glendale which was presented by Church Of The 8th Day and featured Flying Hair as opening act. The timeless, ageless, multi-dimensional musical luminary that he is, Turner played an unforgettable show at the Viper Room in 2014, and had returned to perform in front of his eagerly awaiting LA fans amidst high expectations.

LA’s own Flying Hair started the show with some sweet psych rock jams heavy on synth and easy on the ear. One can always count on this promoter to book the absolute perfect local openers for any touring acts coming through this town and this venue in particular, so much so that most Complex “regulars” venture to the club early to catch these openers purely out of trust in the promoter. Flying Hair certainly served as the right choice for this show. The band presented long and easygoing yet not overly lengthy tunes built around stoner rock and classic ’70s prog and held the crowd’s attention for their entire set. Their 5-song debut effort ‘Haunted Hangout II’ was just reissued in November, and a new album is also in the works for a 2017 release. There is no shortage of great hidden talent in this town, Flying Hair proving to be the newest example of it as they made an undisputably positive first impression here.

Next up, San Francisco Bay Area Krautrock revolutionaries Hedersleben took the stage. They impressed upon first sight and listen at the aforementioned Viper Room gig in 2014, and reprising their role as touring support act and backing band for Nik Turner’s Hawkwind, they were even more captivating on this occasion. This is a band that takes some getting used to for a first-timer, but with a live performance such as this, they take the audience on a journey into a world of their own wherein their brand of musicianship is the new normal and everything they do, whether it be on vocals, violin, guitar, keyboards or drums, is nothing short of mind-blowing. Five fantastic musicians combined to enthrall the crowd gathered at Complex, the set really hitting its peak somewhere around its mid-point and staying there for the remainder of its duration. The dark, haunting, dynamic and powerful ‘The Third Time Fleet’ off of their latest LP ‘The Fall Of Chronopolis’ stood out as the highlight. They also debuted some songs from their upcoming record ‘Orbit’. It is a fortunate predicament that this is Nik Turner’s backing band on tour, because they get to perform their own set, which is an absolute privilege to witness.

And lastly, Nik Turner arrived on stage to join the five Hedersleben members to play a spellbinding set of 14 Hawkwind songs, plus his signature solo sax encore of ‘Tequila’. In a world where self-proclaimed rockstars less than half his age complain about life on the road and the state of the industry, Nik Turner, 76 years of age, is not only one of the oldest known active performers in rock/metal, but is also clearly still enjoying presenting a segment of his musical repertoire on stages such as this, in turn giving his cult fan-following much to cheer about. Most importantly, he is still able to do full justice to these songs with the quality of his own performance, and he has obviously chosen his backing band very wisely. Through his costumes and the band’s own lighting setup, Turner carried a colorful visual presence which was the ideal companion to the stunning, hypnotizing psych rock that decorates these Hawkwind classics. The combination of the song ‘Brainstorm’ and the truly powerful spoken word segment that preceded it was by far the most memorable piece, but the whole set list was well-compiled. Led by Turner’s vocal delivery and flute/sax play and backed brilliantly by Hedersleben, every song was fully brought to life.

The fact that there is still an audience that can pack a place like Complex on a Sunday night and enjoy every moment of such a performance proved the sheer timelessness of Hawkwind, a band that has spawned several generations of heavy music, and one of its original members is carrying on its legacy in the most commendable manner.